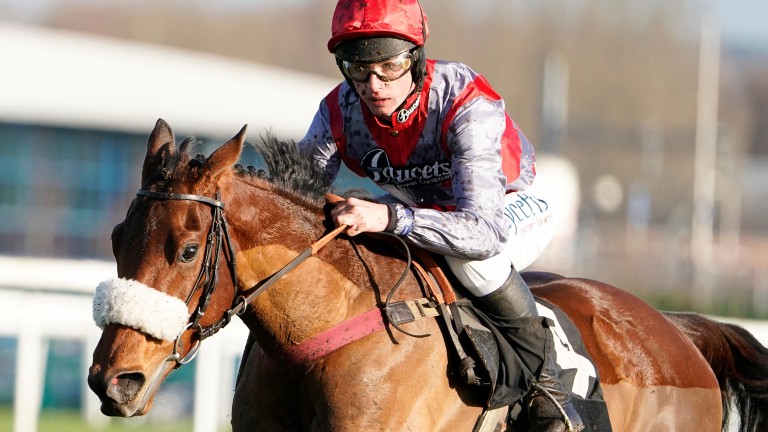 This two-mile handicap chase has tended to be one of the weakest handicaps at the November meeting, but this field promises to provide a clear exception.

The top two in the weights, Magic Saint and Fanion D'Estruval, both burst on to the scene at last year's Ladbrokes Trophy meeting and it could be argued neither has had a chance to show their best since.

In Magic Saint's case, the reason is trip. Attempts to turn him into more of a stayer have proved beyond even Paul Nicholls' considerable skills, but he remains one of the best two-mile handicappers around.

Fanion D'Estruval has run only once since looking like the Arkle winner at Newbury, where he made mugs of Sully D'Oc AA and Southfield Stone off a mark of 137. He took half of Kempton's fences with him in the Wayward Lad next time and was still beaten by less than five lengths.

Those two on their own would make for a two-mile handicap chase of rare intrigue. They are joined by On The Slopes, the progressive Beat The Judge and solid handicappers Ballywood and Eamon An Cnoic. Anything that beats this field comprehensively from a mark in the 150s will earn a Champion Chase quote.

Those expecting a fierce early pace may be disappointed. There is no committed front-runner, unusually for a two-mile race in which there tends to be at least one tearaway in a field of any decent size.

On The Slopes and Azzuri are the two with a meaningful history of front-running. Research done this time last year showed Cheltenham's chase course gives a clear advantage to prominent racers, so Richard Johnson on On The Slopes in particular might sense an opportunity on his race-fit mount.
Keith Melrose, betting editor

Paul Nicholls, trainer of Magic Saint
He ran very well at Aintree the other day. Whether he needed it or didn't quite get two and a half miles I'm not sure, it might have been both. But two miles will be more suitable and I hope he'll go very well.

Charlie Deutsch, rider of Fanion D'Estruval
I'm really looking forward to him. He couldn't have done it any better when he won at Newbury last season then at Kempton the ground was a bit sticky and he got caught on the back foot but he still ran well. He's got plenty of boot  and I'm very confident in the horse.

Dan Skelton, trainer of Born Survivor and Azzuri
Azzuri hasn't been in good form for some time now, while Born Survivor didn't run badly last time but this may not be his trip. We're trying to get the fire back in the pair of them.

Chris Gordon, trainer of On The Slopes
He enjoyed a good time last spring with back-to-back novice handicap chase successes at Kempton. He came back in this year as big as a bull and would definitely have benefited from his first run back at Cheltenham. We've been dropped 1lb to a mark of 142, which will help.

Gary Moore, trainer of Beat The Judge
He's taken well to chasing and I'm very happy with him. He ran well there last time and I hope he's got a good chance.

Alan King, trainer of Ballywood
He's run well this season but had a good blow each time and may just have needed both outings so should be spot-on this time. He's been dropped another couple of pounds so he's lower than at any time since his last win in March of last year.