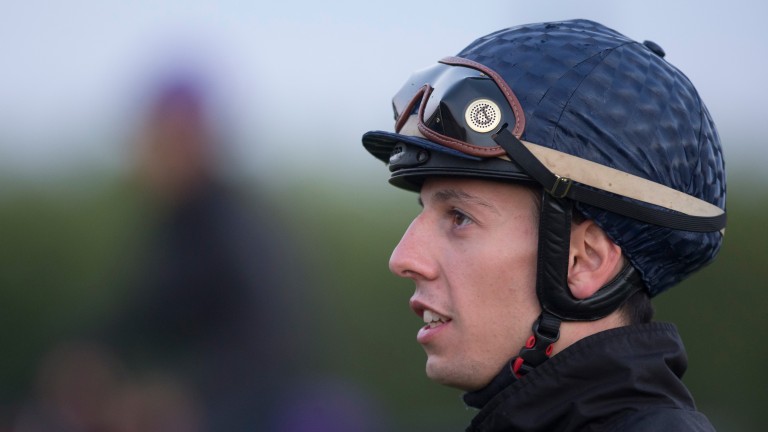 Cristian Demuro was impressed with Port Guillaume at Saint-Cloud on Tuesday
Patrick McCann (racingpost.com/photos)
1 of 1
By Scott Burton UPDATED 6:46PM, MAY 12 2020

How the wheel can turn quickly in this sport, especially in an uncertain situation such as a return to action after an unprecedented break in the schedules.

On Monday Jean-Claude Rouget and Cristian Demuro suffered the disappointment of 2019 Prix du Jockey Club hero Sottsass being beaten on his return to action.

But less than 24 hours later they may have unearthed a candidate for the 2020 version of the race as Port Guillaume stretched his unbeaten record to three with a stylish defeat of Gold Trip in the Prix Tourbillon.

As Rouget was quick to point out, Port Guillaume ran twice at Cagnes-sur-Mer at the start of the year, while those making their seasonal reappearances look to be lacking an edge in fitness.

"Sottsass was rusty yesterday but both he and Helter Skelter are fine this morning and you have to remember they hadn't run this year," said Rouget on Tuesday. "This horse [Port Guillaume] had run twice already and he is a good horse. This is a difficult profession and bringing these horses along is the job of a watchmaker."

In a change to his previous two starts Demuro dictated the fractions out front and was delighted with Port Guillaume.

As if to prove Rouget's point the well-backed Vienne had to settle for second on her return to action half an hour later as Irska backed up her debut all-weather win to land the fillies' version of the Tourbillon, the Prix Durban, for jockey Hugo Journiac and trainer Markus Nigge.

Rossi fast off the mark with Sealiway

It is extremely early days in terms of two-year-old races but Sealiway came from well off the pace to land the opening 6f maiden under a confident Piere-Charles Boudot.

Steadied on the outside of runners rounding the turn, Sealiway came with a sustained burst down the middle of the track and Boudot was left in the unusual position of being able to steal a peek between his legs close home, such was the Galiway colt's superiority over Xaario.

"He's always been very professional in the mornings but he played up a little in the paddock there," said trainer Frederic Rossi. "Pierre-Charles left him to find his rhythm and they've come home very well there.

"I thought what he did was very good there. We'll have to see how the race works out but he passed most of the field in the space of 200 metres [a furlong] there."

Boudot was back in the winners' enclosure little more than an hour later when threading Hurricane Cloud up the rail to get the better of Westeros in the newcomers' race for three-year-olds over a mile.

Trained by Pascal Bary for owner/breeder Guy Pariente, the son of Frankel holds entries in the Jockey Club and the Grand Prix de Paris.

FIRST PUBLISHED 6:17PM, MAY 12 2020
I thought what he did was very good there. We'll have to see how the race works out but he passed most of the field in the space of 200 metres