Politologue bids to add his name to rich roll of honour 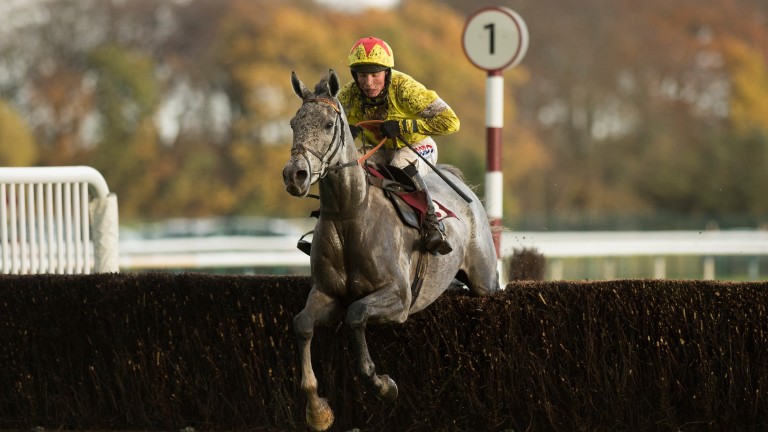 Politologue: made a winning start to his chasing career at Haydock
Edward Whitaker
1 of 1
By Scott Burton 6:00PM, DEC 15 2016

While not all winners of this race have matched the feats of 2012 hero Simonsig – who strolled to a 49 length success before stepping back in trip to capture the Racing Post Arkle – this is a race which invariably turns up at least one good chaser.

Paul Nicholls has landed the last two editions, courtesy of Ptit Zig and Le Mercurey, and will be favourite to bring up the hat-trick with Politologue, who justified plenty of the good words emanating from Ditcheat when powering through the Haydock mud to score by ten lengths on debut.

Nicholls said: "He jumped nicely that day. We thought he would probably need the run but he was further forward than we thought. He did it nicely in the soft ground and I just hope that there is plenty of cut at Ascot."

Rock The Kasbah made a very pleasing impression when getting the better of Our Kaempfer on his chasing bow at Chepstow in October, but was unable to concede 8lb to O O Seven and Sizing Tennessee when finishing a distant third at the Open Meeting.

"He was a little bit disappointing on his second run over fences at Cheltenham when he jumped rather big," said trainer Philip Hobbs. "But he seems to be in good form since and his first run at Chepstow was very good so, if he reproduces that again, we would be very hopeful."

Colin Tizzard admits that Royal Vacation has something to find on the book as he drops back in trip after winning in handicap company at Lingfield over 2m7½f.

"On the handicap he is the outsider but strange things happen in novice chases so we’re going to run," said Tizzard. "There are only four runners and he has more experience than the rest so we’ll grab what we can. We’ve put the cheekpieces back on to galvanise him a bit."

Captain Chaos makes his first public appearance over fences but looked a pretty natural jumper when narrowly beaten over French-style hurdles at Enghien in March.

The winner that day, Ozamo, has since finished a close fifth to Alex De Larredya off level weights at Auteuil – which makes the form of the race look solid, though it should be born in mind that both looked well held before Flight Zero fell at the last.

Dan Skelton said: "We're getting started out over fences and it's a good race. I have a lot of respect for the opposition and they have experience. He jumps nicely, otherwise we wouldn't have gone here and, while he's ready and won't be uncompetitive, this will tell us where we go next."

FIRST PUBLISHED 6:00PM, DEC 15 2016
He seems to be in good form since and his first run at Chepstow was very good so, if he reproduces that again, we would be very hopeful