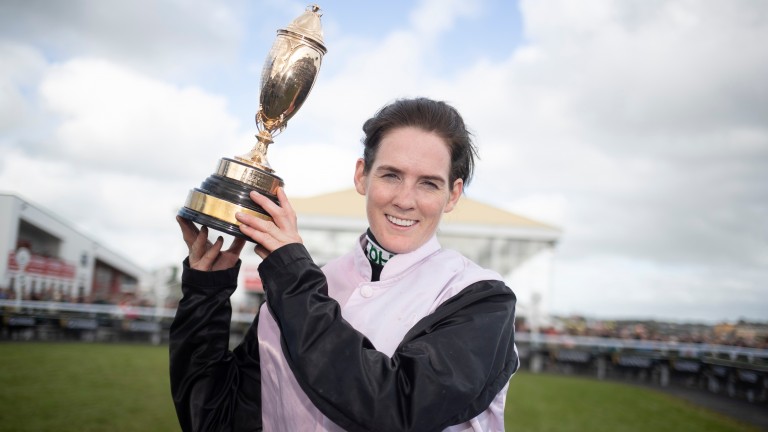 As Rachael Blackmore made her way back to the weighing room after guiding Poker Party to a desperately tight Guinness Kerry National success, Ruby Walsh went out of his way to whisper a quiet word of congratulations in her ear.

The realm of big-race jumps glory used to be his. At the rate she is going, Blackmore is entitled to be talked of as one of the likely successors to that exalted title. She is that good.

On a horse that had struggled to cope with the ferocious demands of a top-class handicap chase in the Galway Plate when trying to get rid of Blackmore at the first fence and succeeding at the second, Poker Party needed an assured pair of hands if he was going to prevail in this €200,000 affair. Last year's championship runner-up is all that.

The 30-year-old settled him in mid-division and gave him plenty of light before gradually easing him into the lead two out. From there we were treated to a pretty frantic spectacle.

Robbie Power made a dramatic exit at the final fence when his reins opened at the buckle end on the challenging Shantou Village.

However, the danger didn't end with his departure, as Denis O'Regan had brought Ravenhill with a typically well-timed charge in a bid to secure Gordon Elliott a third win in four years in the prestigious chase.

Blackmore, though, had judged it to a nicety. Poker Party clung on by a head, with James Motherway's Na Trachtalai Abu, also sporting the Robcour colours of winning owner Brian Acheson, back in third.

In a year that has seen Blackmore plunder a first Cheltenham Festival success, a first Grade 1 at the same meeting and also a breakthrough Grade 1 on home soil, this was another significant triumph.

Following wins for Katie Walsh and Lisa O'Neill, twice, it also constituted the fourth time in six runnings that a female jockey had won the Kerry National. At this stage, that sort of observation is becoming redundant.

"To ride the winner of the Kerry National – it's massive," Blackmore beamed after dismounting from the seven-year-old, who returned at 14-1.

"It's just such a fantastic race and a privilege to have your name among the winners." 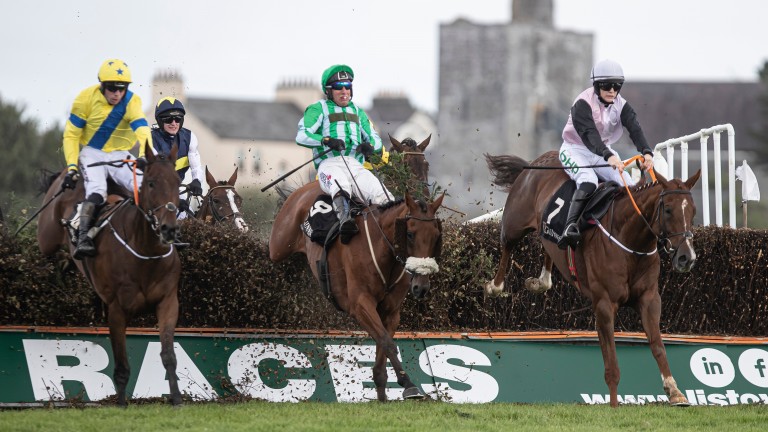 Listowel: the 2020 festival gets underway on Sunday
Patrick McCann

Of their Plate experience, she added: "I didn't make it too far on him in the Galway Plate when I fell off him at the second so it's really great to be able to repay connections with a race like this.

"It's phenomenal. This race is steeped in history and you get some cheer when you come back in. It's brilliant."

Ahead of the 75th running of the race, much of the talk was of what would have been another significant first, as Movewiththetimes was a heavily-backed favourite to secure JP McManus a belated win in the three-miler.

Enda Bolger's charge never really got into contention in a contest that saw old stagers Yorkhill and Valseur Lido set a decent gallop, but it was still firsts all round.

In emulating his father Harry, who landed the race with Bishops Hall in 1996, Henry de Bromhead was also adding the race to his deeply impressive CV for a first time.

"It's great," he said afterwards. "After the Plate we said we'd aim towards today, but it was more about getting him round and trying to get a bit of confidence into him in these big handicaps.

"We felt we kind of threw him into the Plate a little and he got the fright of his life. In fairness to Brian, he said to Rachael that if she finished fourth or fifth he'd be delighted, so we went with that kind of attitude and it worked out.

"Rachael was brilliant on him. She got him jumping early and he started to enjoy himself. It's fantastic to win the race."

After taking up the running going out on the final circuit, Internal Transfer kept going at the one pace to be fourth, while Pravalaguna tired from two out to finish fifth.

Once again, then, a major jumps race was all about one rider, a name on everyone's lips. And it's not Ruby Walsh any more.

FIRST PUBLISHED 4:34PM, SEP 11 2019
It's phenomenal. This race is steeped in history and you get some cheer when you come back in. It's brilliant