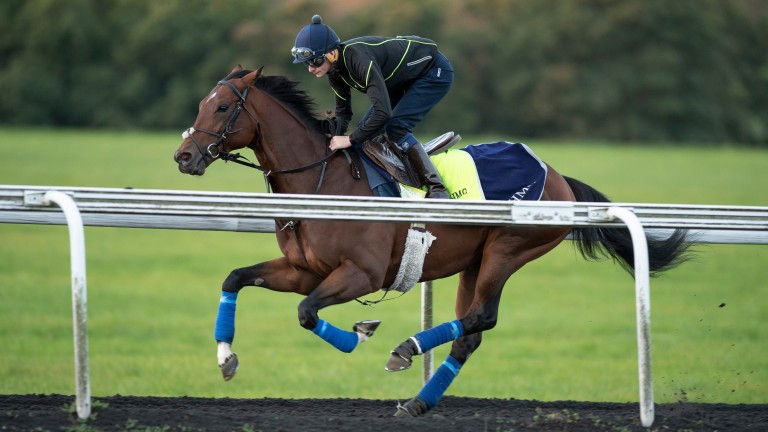 Cracksman bids to emulate his sire Frankel and bring the curtain down on his career with a stirring triumph in the centrepiece of Qipco Champions Day.

Just like six years ago, John Gosden's colt will have to handle demanding conditions if he is to go out on a high and he even has his own version of Frankel's counterpart Bullet Train in the shape of stablemate Maverick Wave to cut out the running for him.

The four-year-old is also out to become just the second horse this century to land the 1m2f contest in successive years, after Twice Over in 2010 and 2011, but the first since it moved from Newmarket in 2012.

After his seven-length romp 12 months ago, Cracksman enjoyed a bright opening to his four-year-old campaign when landing Group 1 victories in the Prix Ganay and Coronation Cup. Since then, he has become something of the forgotten horse of the season following his subsequent defeat at the hands of Poet's Word in the Group 1 Prince of Wales's Stakes at Royal Ascot in June when his mind may well have not been on the job.

Unsuited to the lightning-fast ground that day, owner Anthony Oppenheimer's charge has since bypassed intended engagements in the King George, Juddmonte International and the Prix de l'Arc de Triomphe to get some respite underfoot.

Cracksman also wears blinkers for the first time in a bid to focus his efforts one final time but could be better drawn in stall eight.

Gosden said: "Cracksman's best form is with some cut in the ground and he'll handle it better than some of my other runners.

"He's in top form with himself at home and we're popping the headgear on him to get him focused. It's hard to criticise a horse who's won two Group 1s this year but I think he may have had his mind on other things when he was beaten at Royal Ascot.

"He got a little whiff of some of the fillies coming back from the Windsor Forest that day and tried to hop over a hedge in the preliminaries, so hopefully his mind is on the job this time."

The two-time champion trainer added: "After Ascot, we had hoped to run him in the Arc but it was firm underneath which would not have suited him. His draw is fine and hopefully he can get a nice tow into the race and enjoy a fitting end to his career."

Gosden saddles a third runner in Monarchs Glen, of whom he said: "He should handle the ground and deserves to take his chance. Hopefully he can pick up some prize-money."

Cracksman rather than his stablemate Enable lies in wait this time for Crystal Ocean, who makes his first start since trying to give 8lb to the subsequent Prix de l'Arc de Triomphe winner at Kempton last month.

Although it appeared a little disappointing at the time, a three-and-a-half-length defeat on Polytrack that day looks very respectable in the light of events in Paris and Sir Michael Stoute's hope bypassed that engagement to wait for this.

Before his Enable encounter, Crystal Ocean had racked up a hat-trick in the first part of the season culminating in a comfortable success in the Group 2 Hardwicke Stakes at this venue in June.

After that, the son of Sea The Stars was partnered by Saturday's jockey William Buick for the first time when going down by a neck to stablemate Poet's Word over the same course and distance in the Group 1 King George VI and Queen Elizabeth Stakes the following month.

Crystal Ocean has been in great form at home since his Kempton reversal, although this ground is the softest he will have encountered.

Stoute said: "We've been pleased with Crystal Ocean's preparation at home and are hopeful he can handle the ground, which will be the slowest he's run on I'd imagine. We decided not to supplement him for the Arc and head for this instead and he should not mind stepping back to ten furlongs."

Cons
May be best suited by fast ground

Capri, winner of the Irish Derby and the William Hill St Leger last year, and Rhododendron represent Aidan O'Brien in one of the few Group 1 races to have eluded the Ballydoyle trainer in his hugely successful career.

Fifth in the Prix de l'Arc de Triomphe on his most recent start, Capri drops in distance now. He won the Group 3 Alleged Stakes over the trip at Naas early in the season and O'Brien said on Friday: "He's has had a light season and ran very well in the Arc on only his third run of the year.

"We've been happy with him since and he's shown he handles easy ground which should help him back over the shorter trip. He's in good form and we're looking forward to running him."

Rhododendron won a Group 1 at two, three and again this year when she landed the Lockinge Stakes in May, but her subsequent form has been disappointing.

O'Brien said: "Rhododendron seems in good form and we're hoping she can improve on recent efforts. She has proved adaptable ground-wise and it was soft when she won the Prix de L'Opera last year."

A proven Group 1 performer who has had a light campaign, so improvement very much on the cards. Handles slow ground

Cons
Has shown his best form over longer trips

A groundbreaking first Pattern runner in Britain on the Flat to be trained in the Czech Republic, Subway Dancer arrived at Ascot with solid Group-race credentials earned on frequent visits to France.

Representing trainer Zdeno Koplik and his jockey-brother Radek, Subway Dancer has the happy knack of peaking in the autumn, as demonstrated by a win in the Group 3 Prix Andre Baboin two years ago and last season’s runner-up effort in the Prix Dollar over Arc weekend, although he was less effective in the same race two weeks ago when sixth to Alignment.

“Subway Dancer is in very good form,” said Zdeno Koplik, who has kept the six-year-old on in France since the Dollar to cut down on travelling.

“He ran at the Arc meeting and didn’t like the hard ground and finished sixth. After that we decided to try Ascot, as it's known for having softer ground. We know it's a very hard race, so we are excited to see how he will get on.”

The French handicapper’s peak rating of Subway Dancer has been 112, although he has settled on 108 for his last three performances, which included chasing home Talismanic in a Group 3 at Deauville in August.

An exciting two-year-old last season when he landed the Group 1 National Stakes at the Curragh before finishing fourth behind Saxon Warrior in the Racing Post Trophy, the Jim Bolger-trained Verbal Dexterity has run only twice this season.

Fourth on his reappearance in the Royal Whip Stakes at the Curragh in August, he finished last in the Qipco Irish Champion Stakes at Leopardstown last month when he was in contention until weakening from over one furlong out. He has shown his best form on soft or heavy ground.

Bolger and Kevin Manning combined to win the race with New Approach in 2008.

FIRST PUBLISHED 6:00PM, OCT 19 2018
His best form is with some cut in the ground and he'll handle it better than some of my other runners

Dettori adds to strong hand as he guns for third straight Royal Ascot crown Frankie Dettori in demand as Royal Ascot countdown continues 'Very vociferous' Stradivarius ready to rumble - but Gosden fears Subjectivist Frankie Dettori to link up with an old friend in bid to break July Cup hoodoo Royal Ascot two-year-old guide: the horses to watch in the six juvenile races Key turf figures from past and present turn out to say goodbye to Barney Curley