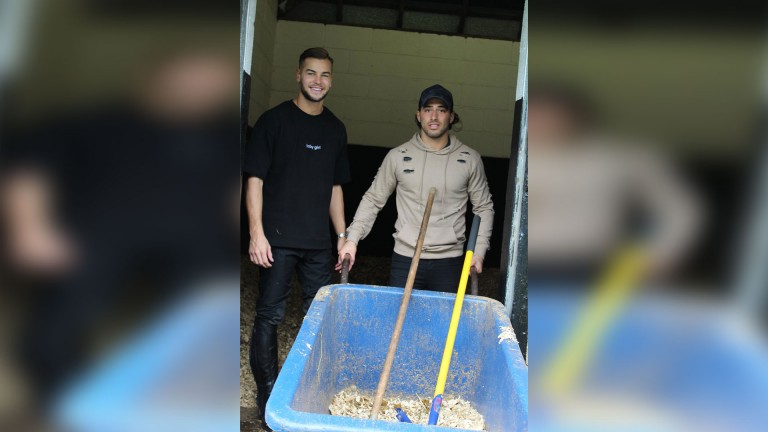 Love Island’s Chris Hughes has been priced at 6-4 by Ladbrokes to be interviewed on ITV Racing before January 1, 2019, after his interest in the sport was underlined by a visit to Jonjo O’Neill’s Jackdaws Castle stable and chat to the Racing Post on Monday.

He is 4-1 to be a guest on ITV’s The Opening Show before the same date, while he is 16-1 to own a winner in the same period, as is his new best mate Kem Cetinay, who with girlfriend Amber Davies won the popular ITV2 show in the summer.

Ladbrokes’ Nicola McGeady said: "Who knew our racing traders would end up pricing specials on Love Island stars, but following on from Chris and Kem's visit to Jonjo's yard, we reckon they could become regular faces in the racing world."

There will be disruption for trainers in Newmarket this winter when the much-used Al Bahathri Polytrack gallop is closed for major refurbishment at the end of October.

The works, which are expected to take at least two months to complete, are primarily to take out a hump between the six- and the seven-furlong pole on the facility, which was the first all-weather to be laid in the town in 1985.

The mile long gallop is very popular with trainers preparing their all-weather horses who have missed out on the turf season, for example four-time Group 1 Enable used it before winning her maiden at Newcastle last November.

Nick Patton, managing director of Jockey Club Estates, said: "We've a huge refurbishment project planned for the Al Bahathri, which when it was first laid just followed the contours of the existing land. If it was being laid now it wouldn't have all the bumps in it and we aim to iron one of the main ones out.

"There's never a good time to close it but hopefully trainers will be able to use the Long Hill Polytrack and we may well leave some grass gallops open as well."

Glen Swire, a former steward and racehorse owner who had a share in July Cup winner Pastoral Pursuits, has died aged 75.

Swire, who lived in East Sussex, was a member of the Brighton stewarding panel and as an owner had horses with Kim Bailey in the nineties as well as being involved in a number in training with Hughie Morrison.

These included top sprinter Pastoral Pursuits, who won the 2005 July Cup, and Pastoral Player, whose eight victories included the Group 3 John of Gaunt Stakes in 2012.

Morrison said: "Glen had legs in Pastoral Pursuits and Pastoral Player and had jumpers with Kim Bailey. He was also a steward at Brighton until a few years ago.

"He had been housebound for 18 months or so, but he maintained his sense of humour and his enthusiasm for racing throughout his adversity."

Funeral details will be announced in due course.

The record penalty the Gambling Commission recently handed out to 888 helped push the online operator into the red in the first half of the year.

Their half-year report released on Tuesday revealed 888 made a loss before tax of $17.3 million (approx £13.4m) in the first six months of 2017 having made a profit of $27.8m in the corresponding period last year.

Last week 888 were hit with a £7.8m penalty from the Gambling Commission for serious failings in their social responsibility measures, including allowing 7,000 customers who had self-excluded to continue playing on their bingo platform.

888's loss was blamed on exceptional charges of $50.8m during the period, $5.5m in connection with the Gambling Commission settlement and the remainder linked to a potential VAT bill in Germany.

Revenue increased by nine per cent on a constant currency basis to $270.1m.

Chief executive Itai Frieberger said: "Whilst the industry will continue to face regulatory headwinds in the second half of the year...trading in the third quarter has started well and in line with the board's expectations."

Royal Ascot winner Heartache, who beat US hotpot Happy Like A Fool to land the Queen Mary Stakes, is set to have her next start in the Group 2 Wainwrights Flying Childers Stakes at Doncaster next week.

The filly, owned by the 75-member Hot To Trot Syndicate and trained by Clive Cox, has not run since July, when she was beaten half a length into third by subsequent Prix Morny winner Unfortunately in a rough running of the Prix Robert Papin.

Syndicate manager Sam Hoskins said: "She pulled muscles in the Robert Papin, when she was bumped by two horses, so didn't make the Lowther, but in hindsight that probably wasn't a bad thing because the ground was on the soft side at York and she might not have run anyway.

"She is going for the Flying Childers next week and is apparently in really good form again. I just hope the rain doesn't come and it is decent quick ground. Sadly I don't think Adam Kirby can ride because the weight is too low as she is running against colts."

He added: "If she ran well at Doncaster then she would have a crack at six furlongs in the Cheveley Park Stakes two weeks later. She has had an unintended break and I suppose she is a fresh horse now. Even without any excuses, being beaten a length by a Morny winner is no bad thing."

Coneygree has been allotted top-weight of 11st 10lb for the Guinness Kerry National at Listowel a week on Wednesday, for which 41 entries were unveiled on Monday.

Galway Plate runner-up Shaneshill is next in the list with 11st 4lb.

Coneygree will become the first Cheltenham Gold Cup winner since L’Escargot in 1975 to run in the Kerry National, for which there are three other British-trained entries: Tempestatefloresco, Art Of Payroll and Viva Steve.

Handicapper Andrew Shaw said: “Last year’s Guinness Kerry National was very strong and this year’s renewal looks better again. The race is going up in stature and to have a previous Cheltenham Gold Cup winner in Coneygree adds to the intrigue. The quality of this year’s race is emphasised by the fact that the last five winners were rated 133 or less and it looks like a rating of 133 will not be sufficient to get a run this time.”

Usherette takes a drop in class at Maisons-Laffitte on Tuesday, when she faces seven rivals in the Listed Prix de la Cochere-Fonds Europeen de l'Elevage.

Godolphin's Andre Fabre-trained mare finished sixth in the Prix Rothschild in July and has appeared only at Group 1 or 2 level since the spring of 2016.

Among her opponents is the Karl Burke-trained Conselice, to be ridden by Tony Piccone, while the trainer also runs Crown Vallary in the Prix Esmeralda, with the same rider booked.

Hayley Turner is also in action on the card, riding Gagner in a female jockeys' race.

While Godolphin enjoyed a profitable weekend at home and abroad, victory in Germany's most prestigious race eluded them as Best Solution and Prize Money filled the last two places in the Grosser Preis von Baden on Sunday behind decisive winner Guignol.

Iquitos was sent off favourite to register back-to-back victories in the Longines-sponsored all-age contest but he was beaten two and a half lengths by old rival Guignol, who was given a well-timed front-running ride by Filip Minarik.

Best Solution, who finished eighth in the Derby, had chased home Iquitos in the Group 1 Grosser Dallmayr-Preis at Munich the time before but could manage only fifth of six, with fellow Saeed Bin Suroor-trained Prize Money trailing home last.

In the Group 3 Steinhoff Zukunftsrennen on the same Baden-Baden card, the Mark Johnston-trained Starlight Mystery finished sixth behind Narella.

Arctic and Tattersall third at Burghley

Arctic Soul, the ex-racehorse who has taken the equestrian world by storm, finished a gallant overall third at the Burghley Horse Trials.

Donner, another ex-racehorse, and US rider Lynn Symansky were sixth.

The 14-year-old Arctic Soul, who cut no ice in four runs for Colm Murphy, has proved a consistent performer in his new discipline and finished seventh at the Badminton Horse Trials in May.

Fourth for Sweeney in Czech Republic

Fourth place was the best Fergus Sweeney could manage from his six mounts as Ireland's representative at the European Jockeys' Cup on Saturday.

French rider Thomas Huet was the winner of the third annual competition, staged at Conseq Park Prague-Velká Chuchle racecourse in the Czech Republic.

FIRST PUBLISHED 2:58PM, SEP 3 2017
Following on from Chris and Kem's visit to Jonjo's yard, we reckon they could become regular faces in the racing world