Talk of the Tracks HEXHAM TUESDAY 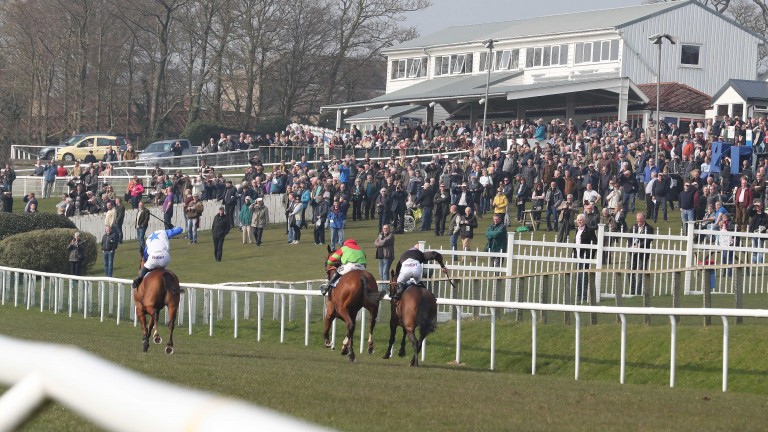 There was a poignant win for homebred Bruichladdich in the opening 2m novice hurdle, just days after his dam Highland Cherry had died.

The Iain Jardine-trained five-year-old is owned by the Distillery Racing Club, having been bred at Robert Robinson's Distillery Stud in Annan, and Robinson said: "He's a homebred and we lost his mother the other night with colic, so it's quite fitting he won today.

"He didn't jump very well out of the ground but he's a young horse, he's progressive, and we've nursed him along. We didn't expect him to win, he's a chaser and anything he does in between is a bonus."

Baracalu makes all in bumper

Baracalu has been shining on the gallops with Sandy Thomson's stable star Seeyouatmidnight and the six-year-old transferred that promise to the track when making all by an impressive 30 lengths in the bumper.

The grey, owned by Sprayclad UK and given a fine ride by Ryan Nichol, was running for the first time since April and Thomson said: "He did a bit of work with Seeyouatmidnight a week last Saturday and Seeyouatmidnight never got to him, and I knew then he was alright. He's grown up a lot since last year."

Thomson declared himself "delighted" with Seeyouatmidnight's second place over hurdles at Kelso on Saturday, but another crack at the Scottish Grand National, in which he was third last year, is not guaranteed to be the next step.

The trainer added: "If he ended up topweight and they got really quick ground the Irish National option is there the Monday before."

One For Arthur's engagement in next Saturday's Randox Health Grand National is getting ever closer and Lucinda Russell's string continues in fine form ahead of the big day, with well-backed 5-1 shot Orioninverness taking the 2m4f handicap chase.

Stephen Mulqueen's mount produced an improved round of jumping back over fences to get off the mark at the 12th attempt, and was warmly welcomed into the winner's enclosure by the Tay Valley Chasers Racing Club, who had 12 members in attendance.

One For Arthur's intended jockey Derek Fox has been out of action since fracturing his right wrist and damaging his left collarbone in a fall at Carlisle on March 9, and Russell's partner Peter Scudamore is optimistic Fox will be able to take the ride at Aintree, saying: "Hopefully his first ride back will be in the bumper at Carlisle next Wednesday."

Modulus rallied from a mistake at the final flight to make it three wins on the spin in the 2m4f handicap hurdle.

The eight-year-old was picked up for £2,000 at Ascot last May by owner-trainer Peter Winks, and has now won four of his last five starts under Winks' son Ryan.

The jockey said: "He was bought cheaply and just keeps improving. The slightly stiffer track suited him and there could be more wins to come - you never know with a progressive horse like this.

"He'll probably have one or two more runs this season because he wants heavy ground."

Ayr the target for Fashion
The 3m½f novice handicap hurdle at Ayr's Scottish Grand National meeting is the target for the Ian Duncan-trained King Of Fashion, who could not have won any easier under Brian Harding in the 2m7½f novice hurdle.

Cooper takes the biscuit
At The Races presenter Robert Cooper misheard raceday announcer Robert Hogarth when the Borders man said that Bruichladdich was named after a whisky, and opened his interview with owner Robert Robinson by asking whether he was named after a biscuit.

Hattons Hill follows up
Twelve days after getting off the mark here Hattons Hill followed up in the 3m handicap chase. Jamie Hamilton said of the Harry Hogarth-trained eight-year-old: "He jumped and travelled a lot better than he did here last time and I knew he'd stay all the way to the line."

Five inches of rain fell at Hexham in the seven days prior to last Thursday, leaving the track waterlogged, and clerk of the course James Armstrong and his team deserve plenty of credit for ensuring the track was in a raceable condition.

FIRST PUBLISHED 6:25PM, MAR 28 2017
He's a homebred and we lost his mother the other night with colic, so it's quite fitting that he won today