Poignant moment: Ruth Jefferson saddles her first winner as a trainer at Kelso 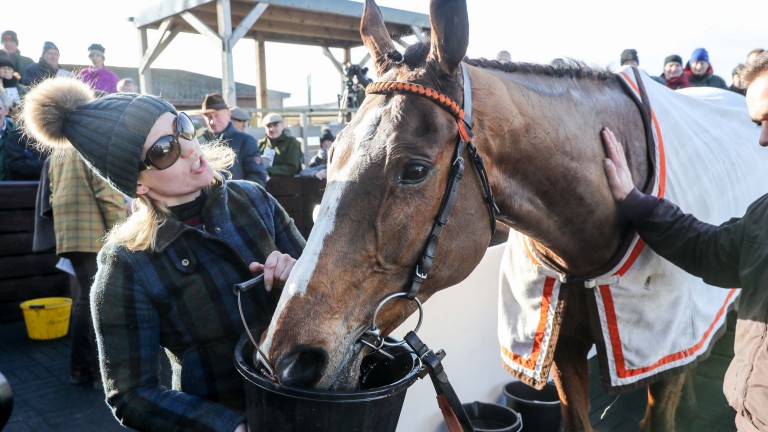 On an emotionally charged afternoon Cyrus Darius gave trainer Ruth Jefferson her first success since she took over the licence from her father Malcolm, who died two weeks ago, when landing the £25,000 Timeform-sponsored Morebattle Hurdle for the second year in a row.

"That was great," said the winning trainer, who remained remarkably calm in the circumstances, although she is used to winners having been a pivotal part of the training operation during the many months her father, whose funeral takes place on Friday, was ill.

"It is Mum's business as well so we'll just try to keep things going as best we can," said Jefferson. "We won't be making any changes as it has worked well for the past 36 years.

"I've been around the yard since I was three, but I've been pretty involved for the past ten years and I have had a good teacher. But it's not just about me, we have a very good team at home and they have been very supportive and this win will have given everyone a boost."

Brian Hughes tracked his three rivals for most of the way and once he made his move going to the second-last the result was never in doubt. The son of Overbury strode right away to win by 12 lengths and become only the second horse to land the prestigious prize twice.

Hughes said: "I'm delighted for Ruth. She has the horses in good form and things will carry on the same – she learned plenty from her dad."

Graham Calder, who shares ownership with his wife Jan and Paul Warren, added: "That was really good – he won really well."

There are no plans for the winner, with his trainer saying: "He could go back over fences if there is a suitable small-field chase for him, or we could keep him over hurdles or we could mix and match the two."

Watch the replay and view the full result

FIRST PUBLISHED 3:36PM, FEB 15 2018
I'm delighted for Ruth. She has the horses in good form and things will carry on the same – she learned plenty from her dad