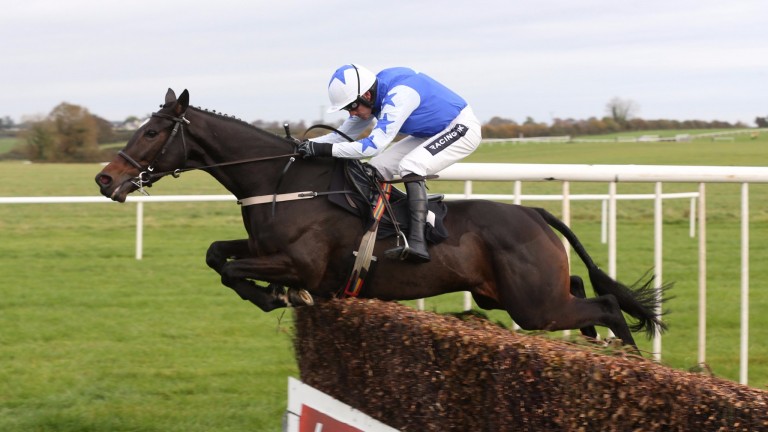 Listen Dear: runs for the first time since making a controversial switch from Supreme Racing to Syndicates.Racing
CAROLINE NORRIS
1 of 1
By Brian Sheerin 2:23PM, DEC 11 2016

The Supreme Racing Syndicate have enjoyed an amazing time of late with their mares and their unbeaten chaser Listen Dear sets the standard in the Grade 3 Kerry Group EBF Mares Novice Chase at Cork on Sunday.

Nicknamed 'the pocket rocket' by connections, the miniature chaser has improved over fences and is one of two Willie Mullins-trained mares in the line-up.

The champion trainer also runs Daisy’s Gift, who seems to have ironed out her jumping recently and got off the mark over fences last time at Wexford.

Mullins said: “Listen Dear will be bidding to make it three from three over fences and the track and trip will suit her.

“Daisy's Gift was let down by her jumping on her first two starts over fences, but then she got her act together when winning at Wexford last time. That should have restored her confidence."

Mullins has leading claims of landing the Grade 3 novice hurdle as well with Screaming Rose.

Runner-up to Blood Crazed Tiger at Cork last month, Mullins is hoping she can go one better but does harbour ground concerns.

“Screaming Rose has been consistent since winning her maiden hurdle in July and ran very well to finish second here in a Listed hurdle last time,” said Mullins.

“She should have a big chance, although testing ground would have to be a big concern."

Gigginstown House Stud are represented in the race by Rathnure Rebel and Monbeg Notorious.

The form of the maiden hurdle Monbeg Notorious won at Down Royal received a big boost when runner-up Moulin A Vent subsequently won a hot Punchestown maiden hurdle.

Trainer Gordon Elliott is excited to move Monbeg Notorious up to three miles and said: "We always thought he would be a stayer and looked forward to stepping him up in trip.

"He's a big honest galloping type and has a great attitude. He was pressed hard by Moulin A Vent at Down Royal in his maiden hurdle, but he kept on galloping and got back up to win, which was nice to see. We like him and he can run well."

Rathnure Rebel got off the mark over hurdles in style at Clonmel last time and trainer Noel Meade said: “He went some way to confirming what we'd always thought of him there. He's taken a while to come right but he'll be at home over this trip.

“He's from a staying family and he'll run well.”

FIRST PUBLISHED 6:00PM, DEC 10 2016
Screaming Rose has been consistent since winning her maiden hurdle in July and ran very well to finish second here in a Listed hurdle last time