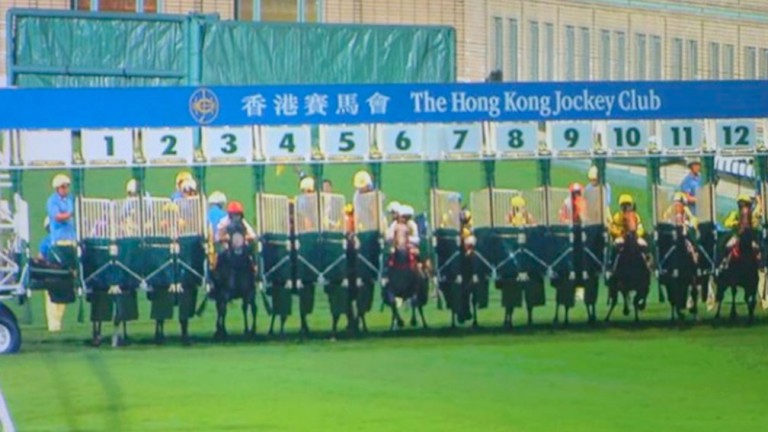 An errant rake prevented the progress of several runners at Happy Valley
HKJC Twitter
1 of 1
By Stuart Riley 1:52PM, OCT 27 2016

History was made in Hong Kong on Wednesday as, for the first time in the jurisdiction's history, a race has been voided – and all because of a stray rake.

Yes. You read that correctly.

Happy Valley, the racecourse that just seven days ago overcame more than 300mm of torrential rain in half a day without any bother, was interrupted by a misplaced piece of gardening equipment.

Watch a slow-motion replay of the incident

The aforementioned rake, which is used to repair the track after the start, was leaned against the side of the stalls and got caught in the starting mechanism. Stalls three, six, ten and 12 opened as they should, but there was a delay before stalls two, four, five, seven, eight and 11 opened. The runners in stalls one and nine were the last to be released.

The stewards were left with no choice but to void the race.

Chief steward Kim Kelly told the South China Morning Post: "Given the number of horses who had their chances prejudiced, we felt it was appropriate to declare the race void."

It meant the HK$126 million in pari-mutuel bets on the Class 4 sprint, £13.27m, had to be returned. All bets on the card's Jockey Challenge were also returned and the competition was also abandoned, while multi-pool bets were paid out under consolation rules, making the rake in question surely the world's most costly gardening tool?

"I've been here as long as most, over 40 years, and I've never seen a 'no race' in Hong Kong," said trainer John Moore. The Hong Kong Jockey Club was founded in 1884.

The history-making race, the fourth on the Hong Kong card, was 'won' in ready fashion by the Zac Purton-ridden D B Pin.

The race that never was

Races have been voided in Britain for all sorts of reasons, from false starts to the wrong coloured flag being waved.

Perhaps the most famous being in the 1993 Grand National when a jockey got tangled in the starting tape, resulting in a false start, but a lack of communication meant 30 of the 39 jockeys did not realise and seven completed the course in its entirety.