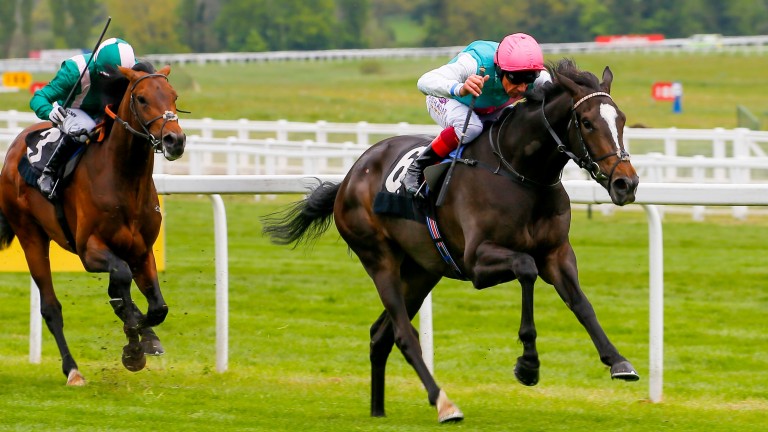 Three-year-old fillies may well be the bedrock of a push towards a third trainers' title for John Gosden this season, with Daban and Dabyah among around half a dozen females who could well make an impact in the Classics in the coming weeks.

Although Daban and Dabyah are well to the fore in the 1,000 Guineas picture on either side of the Channel, Gosden has the luxury of leaving "what as always looked our best filly" at home.

That female, last Friday's Newbury conditions stakes winner Shutter Speed, is now 8-1 second favourite for the Investec Oaks and she has already drawn comparisons with the former Gosden top-notcher The Fugue at Clarehaven Stables.

Gosden said: "Shutter Speed won nicely at Newbury and has always looked our best filly. She won well at Yarmouth in soft ground last year and has always been our best middle-distance prospect. We aim to run her in the Musidora next at York where the mile-and-a-quarter trip should suit. Her pedigree is quick as I trained her second dam Prophecy, who won the Cheveley Park, so we'll see how we go as regards distance."

Nearer to hand, Gosden is out to win the Qipco 1,000 Guineas for the second time (after Lahan in 2000) with Daban, who overcame her inexperience to land the Group 3 Nell Gwyn Stakes on just her second start at Newmarket last week.

Just three days later, the more streetwise Dabyah carried the same red and white colours of Abdullah Saeed Al Naboodah to victory in the Group 3 Dubai Duty Free Stakes at Newbury when she scarcely came off the bridle to see off Urban Fox.

On keeping the two apart, Gosden said: "I don't think there is any point for an owner with two fillies who've won their trial to be taking each other on in a Classic, which is why Dabyah is pointing towards Deauville and Daban towards Newmarket.

"Don't get me wrong, the English 1,000 Guineas in the number one objective and if for any reason Daban could not run at Newmarket then Dabyah would take her place. It's great for an owner such as Mr Al Naboodah to have such fillies, both of whom were well bought by Richard Brown of Blandford Bloodstock."

The Qipco 1,000 Guineas market is headed by Ballydoyle's Rhododendron, and Gosden added: "Daban has done well since Newmarket but we have all the respect in the world for Rhododendron in the race as the Fillies’ Mile is usually strong form."

FIRST PUBLISHED 12:07PM, APR 25 2017
I don't think there is any point for an owner with two fillies who've won their trial to be taking each other on in a Classic