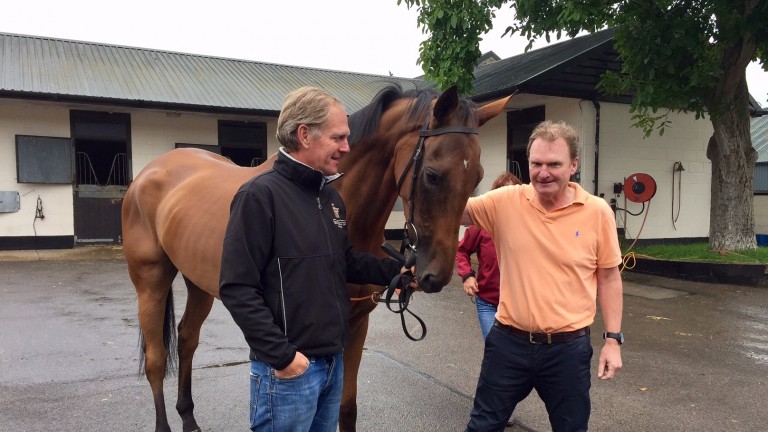 It was the last big work morning of the year on the Limekilns where the unusually mild autumn meant it was access all areas. Stoute was feeling flush and paid the £50 premium to use both the trial ground and the round gallop, and Kevin Bradshaw certainly got his money's worth as he sent the Qipco Champion Stakes entry clear.

Jim Crowley turned up in his Audi in plenty of time to go through the gears on the recent Yarmouth winner on the trial ground. The chestnut is not unlike Ulysses in looks and turned in a similar performance when powering clear of an older lead horse. He holds an entry in the Group 1 Racing Post Trophy at Doncaster on October 28.

A day after cantering in front of the press on Warren Hill, the St Leger third stepped on the gas on the long gallop under Frankie Dettori. The chestnut will be a nice prospect next year in races such as the Ascot Gold Cup and heads to Berkshire next weekend for the Group 1 Qipco British Champions Long Distance Cup for which he is third favourite.

You did not need a torch to see the Pegasus speedster on the trial ground as he lit the way through the gloom under Tom Queally. Named after Fred Archer and not a character from the Wizard Of Oz, the five-year-old is to attempt back-to-back wins in the Qipco Group 1 British Champions Sprint at Ascot next Saturday, a feat yet to be achieved.

Vaughan was busy at the Tattersalls October Yearling Sales last week and was just as active on Friday morning where he sent this promising youngster up the Limekilns short gallop. Before riding a double on the Rowley Mile in the afternoon, Harry Bentley was at the controls of the son of Dream Ahead, who finished a promising second on his debut at Yarmouth last month.

Bill Gredley and his son Tim were treated to a spectacular sight as the Champions Day contender took off towards the BP garage when breezing around the bend under his lad Tyrone Lloyd-Jones. Connections are to re-offer the ride to James Doyle next weekend if first-choice pilot Frankie Dettori is claimed for Stradivarius.

FIRST PUBLISHED 1:20PM, OCT 14 2017
Connections are to re-offer the ride to James Doyle next weekend if first-choice pilot Frankie Dettori is claimed for Stradivarius

'We could have done without it' - rain the worry as Stradivarius chases history Everything you need to know about day three of Royal Ascot on Thursday His place, his moment, his destiny - Stradivarius on the cusp of Ascot history Confirmed runners and riders for the Gold Cup at Royal Ascot Tom Collins' expert race-by-race guide to day three of the royal meeting Is this Aidan O'Brien's greatest Ascot masterstroke or a total shot to nothing?