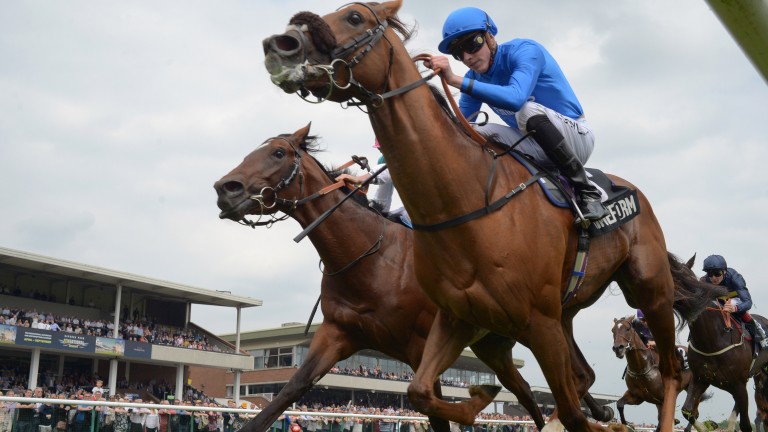 The trainer said he was "in two minds" about which race to aim at with the Godolphin Group 3 winner after seeing the strength of the opposition in the Mile, which is headed by defending champion Tepin.

Home Of The Brave is already guaranteed a start in the Turf Sprint over six and a half furlongs, but the Mile has been nominated as his first preference race, in which he will secure a place if Mondialiste runs in the Turf and Kitcat the Filly & Mare Turf.

"I'm pretty certain he'll get in the Mile but we might take the other route," said Palmer yesterday. "I'm very much in two minds.

"I have wanted to run him in a two-turn mile for ages. I think it will really suit him but at the same time he has got 6-7lb to find with some in the field in the Mile and he doesn't have anything to find with pretty well everything in the Turf Sprint. The Sprint also seems less draw biased."

The four-year-old has gained all his wins at six and seven furlongs and the only time he has tackled a mile was in the 2015 2,000 Guineas in which he finished sixth.

"I hope he'll stay a two-turn mile but 1,300 metres is a fraction short of his optimum," Palmer added. "The Breeders' Cup have given a very good indication of what is likely to run in either race. I will discuss it fully over the weekend and see how things look on Monday when we have to declare."

Home Of The Brave, expected to be ridden by James Doyle, is set to be Palmer's first Breeders' Cup runner after Aktabantay had to be scratched from the 2014 Juvenile Turf with a sore foot the day before the race.

Godolphin will have at least one Mile representative in the Charlie Hills-trained Dutch Connection.

"He leaves tomorrow," said Hills. "His weight and word is good. It will be tough for him but so long as they go a good pace and he gets a bit of cover he will run well."

Palmer's decision on which race to run in could have implications for Ed Vaughan, whose own debut challenger Mehronissa is fifth on the list of also-eligibles for the Turf Sprint.

Vaughan said: "It looks like we are going to take her anyway because if she doesn't get in there is a fillies Grade 3 race over course and distance there on the same day. Freddy Tylicki will ride her. He knows her well and especially when the race is down a hill. European guys will have plenty more experience riding horses down hills than the local jockeys.

"She did her last bit of work this morning on the trial ground on the Limekilns and Freddy said she felt great. She is fresh and well and she will just tick over now.

Pleaseletmewin, winner of last Saturday's Horris Hill Stakes at Newbury, will not be joining Europe's Breeders' Cup team after he was sold at Tattersalls on Wednesday to continue his career in Qatar.

FIRST PUBLISHED 1:31PM, OCT 27 2016
I've wanted to run him in a two turn mile for ages. I think it will really suit him but at the same time he has got six or seven pounds to find with some in the field in the Mile