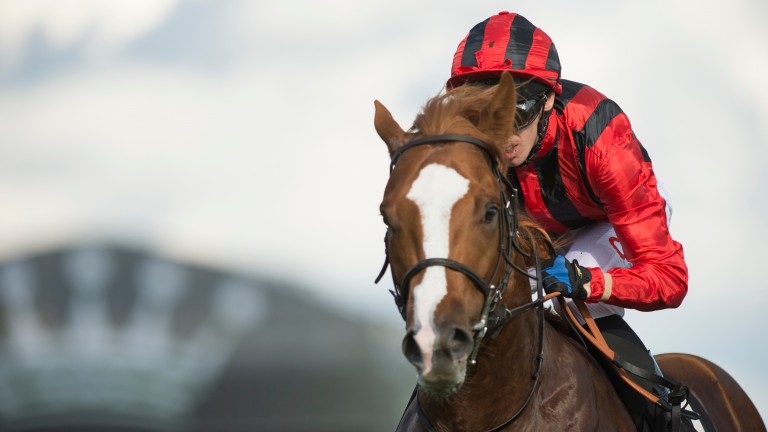 Delayed flights are the bane of holidaymakers' lives and Ed Walker is hoping a technical fault to the plane due to transport Stormy Antarctic to the US does not ground his dreams of a first success at the highest level.

Saturday's Grade 1 Ricoh Woodbine Mile in Canada has long been a target for the consistent Stormy Antarctic, who has been runner-up three times in top-flight races.

He will be partnered by Gerald Mosse in the $800,000 turf contest in which he will clash with fellow British raider Lord Glitters – providing the pair can take to the skies.

Horses with altitude: how do racehorses travel around the globe

Walker, enjoying his best season which has also yielded a breakthrough Royal Ascot triumph, reported on Tuesday morning: "We were extremely hopeful and confident until he arrived at Amsterdam to the news his flight, which had been due to take off on Monday afternoon, had been cancelled, so he's currently stuck there with Lord Glitters and a couple of other European horses running at the meeting.

"They're hoping to fly on Thursday, which isn't ideal, but not a disaster as he's a very good traveller and very experienced, so hopefully it won't hinder him too much. It's just one of those things."

Watch a replay of Stormy Antarctic running in the Celebration Mile

Stable stalwart Stormy Antarctic has won two Pattern races this season and was also second to Benbatl in a Group 1 in Germany in July.

The Lambourn trainer, speaking on his way to Lingfield for some barrier trials, added: "Hopefully it'll be good safe ground in Canada and we're very hopeful. We've had a plan to mostly keep him away from Group 1 company all year until this race, which was always the first of the autumn targets.

"We wanted to get him back winning and get his confidence back and we've done that. He's had a really good season and as far as horses go I think he deserves a Group 1 about as much as Lightning Spear did."

Walker, who trains the five-year-old for PK Siu, added: "The race isn't as strong as it can be and I think Lord Glitters and us are the ones to beat."

Formerly located in Newmarket, where he never had a settled base, Walker reckons his move to Lambourn at the end of 2016 has been a contributing factor to his fine run this year, underlined by a double at Ascot on Saturday.

"My career's been a gradual progression and year on year we've improved winners and prize-money and, as a result, we've attracted a better type of horse," said Walker.

"Having the stability at Kingsdown that we never had before – we've always been insecure in having to move and move – has also helped."

Fille De Reve and Sandringham ace Agrotera are well-regarded Bjorn Nielsen-owned fillies Walker has high hopes for, particularly next year, while Triggered is a "smart two-year-old" and Cap Francais is "exciting".

Swindler is another juvenile to note, as is Duckett's Grove, a recent purchase by Siu from Emmet Mullins' yard who could run in the Haynes, Hanson & Clark at Newbury next week.

Royal Intervention, who won the Listed Empress Stakes at Newmarket in the Lord Lloyd-Webber silks, will not run again this season but is "very good" and will be treated like a Qipco 1,000 Guineas filly, while another trip to the US for Keeneland's First Lady Stakes is in an option for Indian Blessing.

FIRST PUBLISHED 10:27AM, SEP 11 2018
He's currently stuck in Amsterdam with Lord Glitters and a couple of other European horses running at the meeting.