Ouch! Plan goes out the window as conditional Andrews unseats yards from line 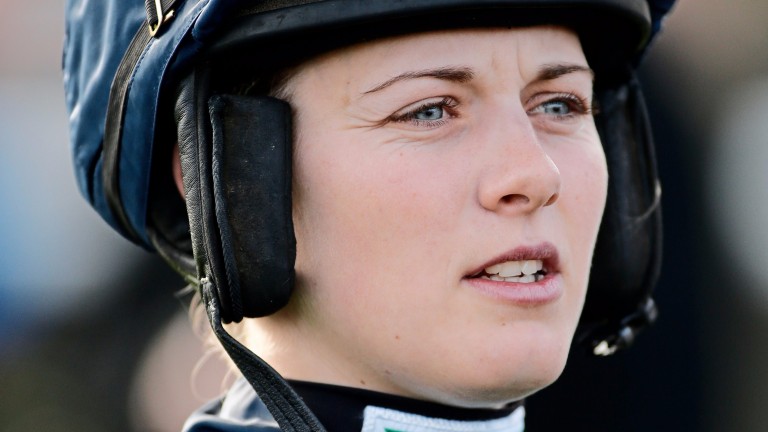 Bridget Andrews: lost an iron at the last
Alan Crowhurst
1 of 1
By James Burn and Lewis Porteous UPDATED 1:26PM, OCT 4 2017

There was a dramatic end to Southwell's 3m novice hurdle on Tuesday when Stick To The Plan – who looked set to strike – unseated jockey Bridget Andrews yards from the line after being matched in running at 1.01 on Betfair for more than £50,000.

Andrews was riding the 7-4 favourite for table-topping trainer Dan Skelton when she lost an iron at the last on the five-year-old, who was five lengths clear.

The conditional desperately tried to regain her balance, but hit the floor with the winning post fast approaching, handing victory to 9-1 chance Nemean Lion.

Stick To The Plan was not hurt and neither was an upset Andrews, who said: "I just lost my balance.

"He was almost too careful at the last and shot me up in the air and I lost my stirrup. I got it back again but he jinked up the run in and I lost my balance – it's as simple as that."

The 24-year-old added: "Maybe I should have put my stick down but he's a horse who only just does enough and I wanted to make sure I had the race won, but there you are. He's a lovely horse and I'm lucky to ride such a nice horse."

Paddy Power and Betfair were among the firms to pay out on Stick To The Plan, while Skelton's assistant Nick Pearce added: "It happens, unfortunately.

"The horse looked a bit green, but he jumped the last well and Bridget has just become a bit unbalanced. It's happened to better jockeys and will happen again in the future. It's just one of those things unfortunately.

"She got her foot back in the iron but it happens and it's just very unfortunate it was on the run in when the race was won. She's okay and the horse is and that's the main thing."

Nemean Lion's trainer Phil Kirby was not complaining about the method of victory.

He said: "You need a bit of luck now and again and it's usually the other way around. I'd have been happy to finish second and didn't really see what happened, but there you go. He's consistent and a good fun horse."

Young riding sensation James Bowen, who did the steering on Nemean Lion, felt sympathy for his weighing room colleague.

"I was booked for second and it's the worst way to win a race," he said. "Bridget was very unfortunate and you would not wish it on anyone. I didn't know what to think and it's a bit of a shock. She won't be the last person it happens to."

It is not the first time Southwell has staged a dramatic finish to a race as in 2015 leading jump jockey Sam Twiston-Davies unseated with a race at his mercy.

He was eight lengths clear on Hawkhurst in a novice hurdle when the gelding bucked and jinked right in the closing stages, sending the rider crashing to the turf.

The best race reports on racingpost.com

FIRST PUBLISHED 4:51PM, OCT 3 2017
Maybe I should have put my stick down but he's a horse who only just does enough