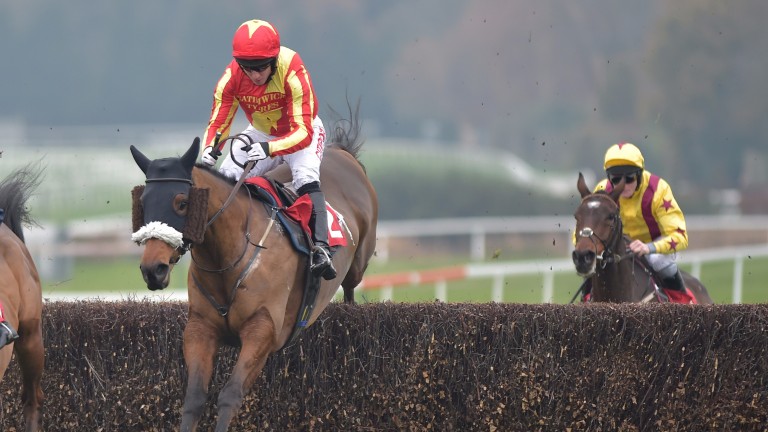 Wayne Clifford, boss of race sponsors Bathwick Tyres, is part-owner of Pilgrims Bay, who attempts to get the wheels back on his chasing career in this eight-runner contest after a fall at Wetherby last time.

The top weight had accounted for Antartica De Thaix by a head on his debut over fences at Sandown in December, when the third finished 12 lengths back.

The only other previous winner over fences is Bagging Turf, who also happens to be the only female among this competitive-looking field.

The mare makes a quick return after overcoming Movie Legend on her chasing introduction at Huntingdon on Boxing Day, for which she has been raised 8lb.

Four of the eight runners are having their first try over fences. They are Draytonian, Favorito Buck's, Wild West Wind and Clondaw Banker.

Andrew Glassonbury, who partners Bagging Turf, has ridden only one winner at the track in the past five years.

Neil Mulholland, trainer of Pilgrims Bay
He'd jumped well on the whole before falling at Wetherby last time, since when he has schooled well at home. It's a competitive race but he goes there with a nice chance on his previous form, and we're hoping he runs well as he's part-owned by the sponsor.

Philip Hobbs, trainer of Draytonian
He had a couple of spins over hurdles before Christmas and is ready to start off over fences. He's schooled well at home and should be in the mix on his best hurdles form.

Harry Derham, assistant to Paul Nicholls, trainer of Favorito Buck's
He's been bitterly disappointing for us so far. We're hoping he'll jump fences well, and he's schooled really well. The cheekpieces will sharpen him up and make him travel, but we're hopeful rather than confident.

Tom George, trainer of Wild West Wind
He's always looked a chaser rather than a hurdler and it will be interesting to see how he goes. He's schooled nicely at home but this will probably be his minimum trip. We're hopeful of a nice run back.

Nicky Henderson, trainer of Clondaw Banker
All’s well with him. It’s his first run over fences but he’s schooled nicely at home and it looks the right race for him.

Colin Tizzard, trainer of Third Act
He's going back over fences after having a few confidence-boosters over hurdles recently and it could be that we keep mixing it between the two. His jumping has improved since he's gone over hurdles and this looks a nice opportunity for him.

FIRST PUBLISHED 6:00PM, JAN 6 2017
It's a competitive race but he goes there with a nice chance on his previous form and we are hoping he runs well as he's part-owned by the sponsor