Pies and pints but no punting in shops for racegoers 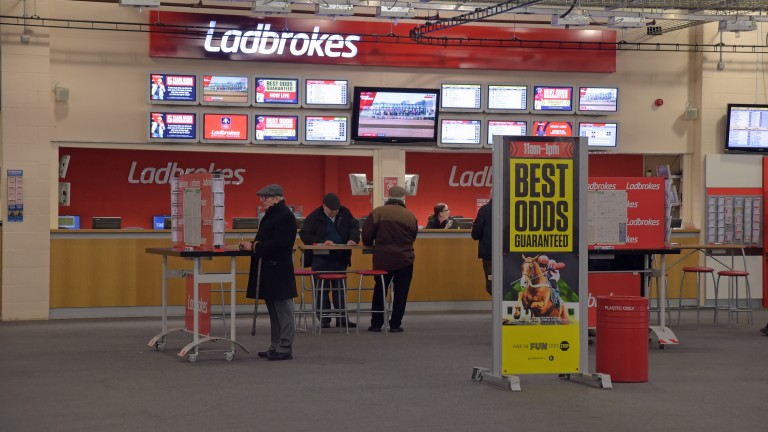 Racegoers at Southwell on Monday will be the latest to be met by an empty course betting shop in the ongoing dispute between Arc and Ladbrokes.

Those at Doncaster and Lingfield on Friday and Saturday were the first to suffer in the dispute over the bookmakers using an off-tube commentary in their high street betting shops to compensate for no pictures.

The dispute between the parties over payment for the pictures remains in the hands of lawyers with punters and now racegoers bearing the brunt of the fallout.

Blank looks and blank screens told the story at the aforementioned tracks with nowhere for weekend racegoers to have their football bet of a 50p yankee.

A succession of racegoers peered at the note pinned to both Ladbrokes office windows at Lingfield which stated: "This Ladbrokes shop is closed for the foreseeable future. Bets can be placed with on-course bookmakers next to the track or at Tote outlets. We apologise for this inconvenience."

"I'm absolutely appalled," said Jackie Williams, from Watford who along with husband Fred had just renewed their Lingfield annual membership.

"It's ruined my day's racing and I'm sure others feel the same. This area is usually buzzing with nowhere to sit and look at it today," added Jackie, looking ready to swing her handbag at any Arc official who was misguided enough to check on how the impasse with Ladbrokes was going down.

So the on-course bookmakers and Totepool would make a killing surely? No.

Some of the twentysomethings, swilling beer in the Tattersalls bar, opted for their mobile betting options to fill the void.

Just ask Lingfield legend Barry Dennis who bets on the away meetings.

"It wasn't worth it - a waste of time," said Dennis with his number one pitch right outside the darkened Ladbrokes outlet in the stand.

He failed to hit three figures in turnover on any race at Doncaster and while his Lingfield book had four figures across the card even Cheltenham struggled to get into the hundreds.

Totepool operators reported plenty of requests for missing football coupons and multiple bets which the machine could not offer.

There was also criticism of the the bank of 12 screens being blank through the day with racegoer Malcolm Heath summing up the feeling.

"I don't know who owns them but if they had been working it would have livened things up."

Doncaster, with its cavernous grandstand usually blazing the beacon red of the Ladbrokes logo, looked stripped of welcome.

Dave Clarke, from Bawtry, said: “I use the bookies on the course, but it’s had an effect on the atmosphere under here. I hope they sort it out because it’s the punters who suffer.”

Paul Devlin, from Doncaster, but unlike many raceogers aware of the situation, said: “I’ve had my bets on in the Ladbrokes near me before I came. It’s daft having a racecourse like this without a proper bookies. And the one here is so big you can hardly miss it’s gone.”