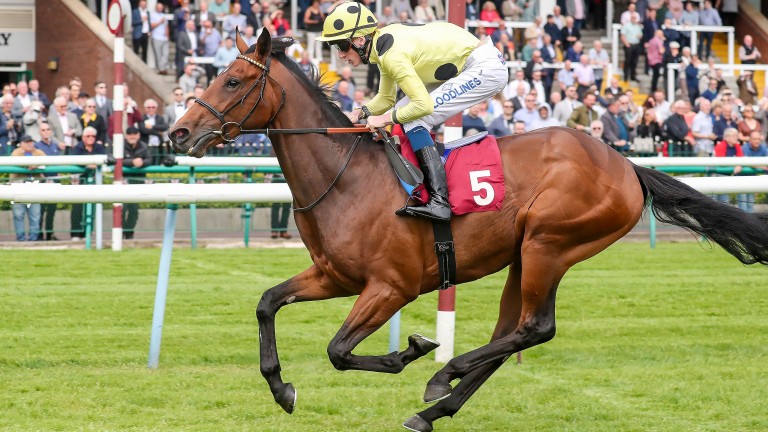 Pierre Lapin: raced once this season when winning at Haydock
John Grossick (racingpost.com/photos)
1 of 1
By Peter Scargill 6:00PM, SEP 20 2019

Pierre Lapin returns to the course for the first time since making a winning debut in May and attempts to emulate his illustrious half brother Harry Angel by landing this contest.

Trained by Roger Varian for Sheikh Mohammed Obaid, Pierre Lapin has been given time to develop and mature over the summer, during which time Varian’s opinion of him has remained high.

Golden Silca was the last filly to win this race 21 years ago. Shadn represents the girls this year.

The trainer said: “He’s training well and it’s a big jump up in class, so it will tell us if he will have another run in the autumn or if we put him away for next year.

"I think he's going to be a nice horse for one day, whether it’s Saturday or next year.”

Such is the depth of talent among his two-year-olds this season, trainer Richard Hannon is able to leave his Gimcrack Stakes and runaway York winners at home, yet still saddles one of the leading contenders here.

Other targets await Threat and Mums Tipple, leaving Mystery Power as the chosen one to try and provide his trainer with a first win in the Mill Reef. 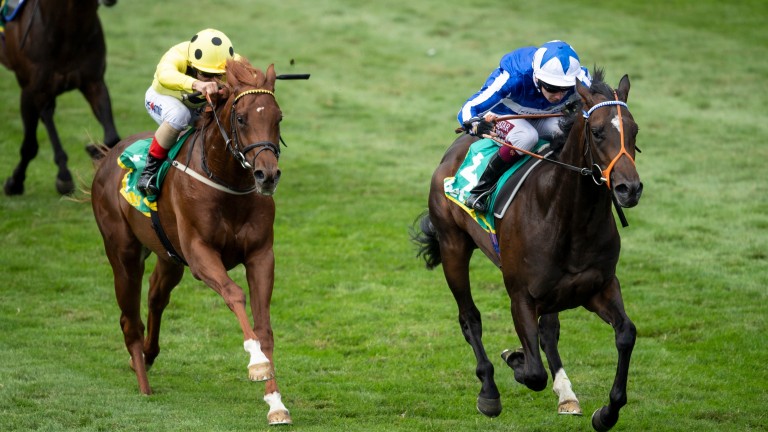 Mystery Power has already scored at Group 2 level with a ready success in the Superlative Stakes at Newmarket, for which he carries a 3lb penalty, but he needs to bounce back to that form having disappointed when well beaten behind Pinatubo in the Vintage Stakes last time out.

“I thought he’d win the Vintage but he bumped into Pinatubo and came back with a dirty scope, so I’m more than prepared to forgive him that run,” Hannon said. “He’s a top-class colt so deserves to take his chance and I hope he’s good enough to win.”

Prior to Malotru running in the Gimcrack Stakes at York, trainer Marco Botti was a little unsure quite how good his juvenile was.

He knew he was talented after he landed a Group 3 in Italy, but the son of Casamento stepped up on that with a good, and slightly unlucky, fourth behind Threat.

Botti is seeking a second success in the Mill Reef having captured the race in 2012 with Moohaajim, and said: “I think the six furlongs at Newbury will suit him better as I feel at York it can be a little bit sharp. Eventually I can see us stepping up to seven furlongs.

“He’s done well since his last race and I think he’s in really good shape, so I’m hopeful of a very good run from him.”

Marcus Tregoning, trainer of Impressor
We’ll find out how good he is but hopefully he’ll have a reasonable chance. We couldn’t have been more pleased with the way he won at Salisbury. He won it very, very well and he’s worked well since. He does have a lot of speed.

Michael Bell, trainer of Mr Kiki
The form of his debut run is extremely strong and while he wasn’t mightily impressive when he won, it was quite a quick turnaround. He’s a very good-looking horse and thoroughly deserves to take his chance in the race, so I hope he puts in a strong performance.

Charlie Hills, trainer of Royal Commando
He's got a great attitude to everything and has been unlucky – he got no run at Goodwood and couldn't run at York. His work has been good and I'm hoping to find out more about him in this race.

Andrew Balding, trainer of Shadn
She’s a filly against the colts but she gets a nice little allowance which should help her chance. She has a chance of getting a bit more black type next to her name if she is placed.

Big-hearted Lady Bowthorpe gives Jarvis best success in over 25 years Karl Burke unearths another promising filly as Celestial Queen gets off the mark One horse, one race, one trainer and one jockey to follow on Wednesday Qipco 2,000 Guineas: trainers on their contenders for the Newmarket Classic Golden oldies Pettochside and Oh This Is Us roll back the years 'I needed that' - Eoin Walsh enjoys first win since breaking back in horror fall