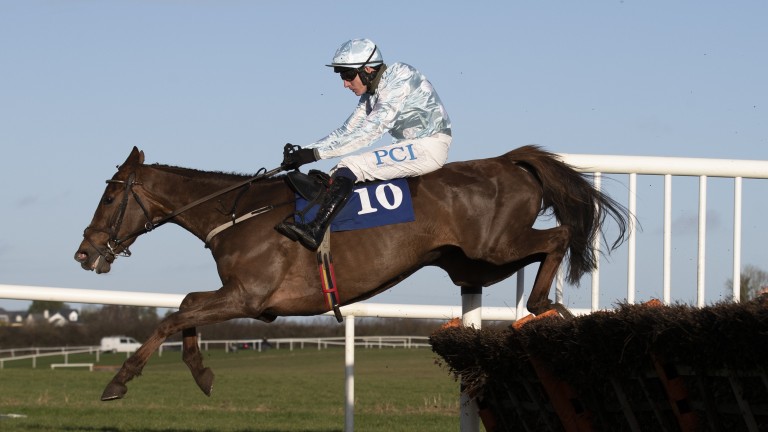 Gauloise: one of four Willie Mullins-trained runners in the Dawn Run
Patrick McCann
1 of 1
By Tom Collins and Jonathan Harding UPDATED 8:17PM, MAR 17 2021

Trends indicate you need look no further than Gauloise, Hook Up, Glens Of Antrim and Pont Aval in this year's Dawn Run. The lightly raced group make up just shy of a third of the field, but they are trained by Willie Mullins and that might be enough to eliminate the rest from your shortlist.

The Closutton trainer has won all five runnings of this race, while also saddling the runner-up in each of the last two years. According to the market, Hook Up is his main hope this year, though it is worth noting that he won the acer with ostensible fourth string Eglantine Du Seuil in 2019. 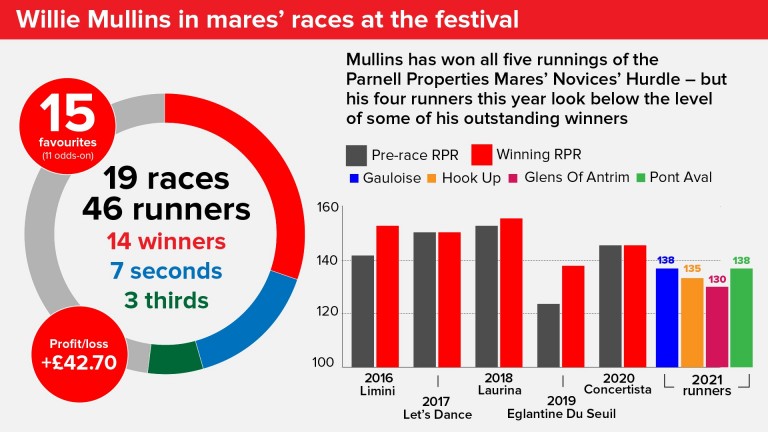 Hook Up's level of form rates among the best in this field – she finished fourth behind Supreme winner Appreciate It at the Dublin Racing Festival last month – and five-year-olds have won this race four times, but her lack of fluency over hurdles is a big worry.

Furthermore, her worst performance on RPRs came at this meeting when she was 11th in the 2020 Triumph. She looks an improved mare this year but doesn't come without risks.

Fate of the favourites

Willie Mullins has won this race in each of the last five years but his two most recent winners did not head the market. Epatante and Minella Melody were beaten favourites in 2019 and 2020.

The same can be said for Mullins' other runners. Gauloise, who looks a live player on the form book, has jumping issues herself and has to give away 5lb to her younger rivals, while Glens Of Antrim remains a maiden after three starts. Despite failing to assert her authority so far in her career, the latter now sticks to racing her own sex after three creditable efforts behind the boys and she was a notable market mover last week.

If Mullins is to lose his stranglehold on the race, who will be the beneficiary? The prolific Royal Kahala – long considered the main Irish hope before losing her winning streak last time – and Challow Hurdle third The Glancing Queen are two to consider.

Given their high cruising speeds and tendency to race keenly, a fast gallop would see them both in the best light. If that pace scenario develops, not only will it suit the strong travelling pair but it may catch out the sloppy hurdlers.
Race analysis by Tom Collins

Willie Mullins, trainer of Gauloise, Glens Of Antrim, Hook Up and Pont Aval
Paul [Townend] has sided with Gauloise as he thinks she may just have run a bit flat last time. However, at these weights she would look to have a tough task to reverse form with the two that finished ahead of her that day. Glens Of Antrim has pleased us at home and could run a big race. The drying ground will benefit Hook Up more than any of our horses this week. If Danny [Mullins] can produce her late it could pay dividends. Pont Aval won well last time and is in very good order. She’s improving but needs softer ground to be seen at her best.

Jonathan Sweeney, trainer of Roseys Hollow
It’s great to be going over there with a chance and she’s entitled to be in the mix on form. Hopefully there’s more to come from her. 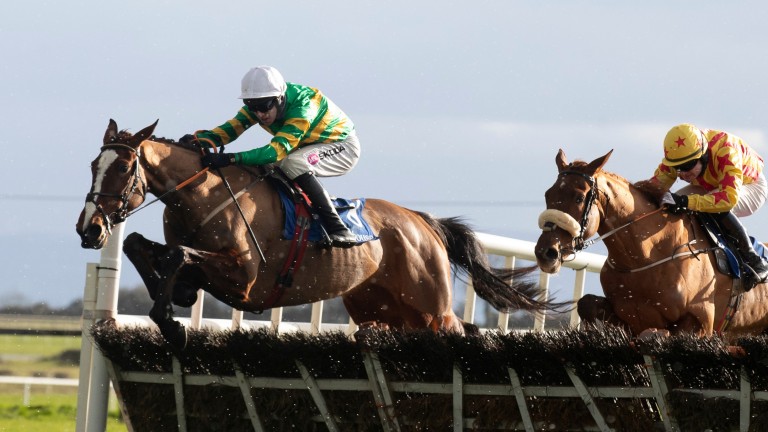 Shark Hanlon, trainer of Skyace
Jody McGarvey rode her on Wednesday morning and she bounced the whole way back to her stable. She’s in mighty form. I can’t have her any better than she is and with a bit of luck she’ll be involved.

Joseph O'Brien, trainer of Mighty Blue
She's in good shape. A little bit of spring ground will suit her compared to the heavy ground she's been running in all winter.

Peter Fahey, trainer of Royal Kahala
I’m thrilled with how she travelled over. I couldn’t be happier. The ground is drying out a bit but it should be fine. A repeat of her second-last run would give her a big chance.

Alan King, trainer of The Glancing Queen
I hope and think she'll run extremely well. Her preparation has gone smoothly and she won't mind the slower ground.
Reporting by Jonathan Harding

4.50 Cheltenham: Keith Melrose fancies a pair of novices to come to the fore in a tricky contest

FIRST PUBLISHED 6:00PM, MAR 17 2021
A repeat of her second-last run would give her a big chance and the track should play to her strengths