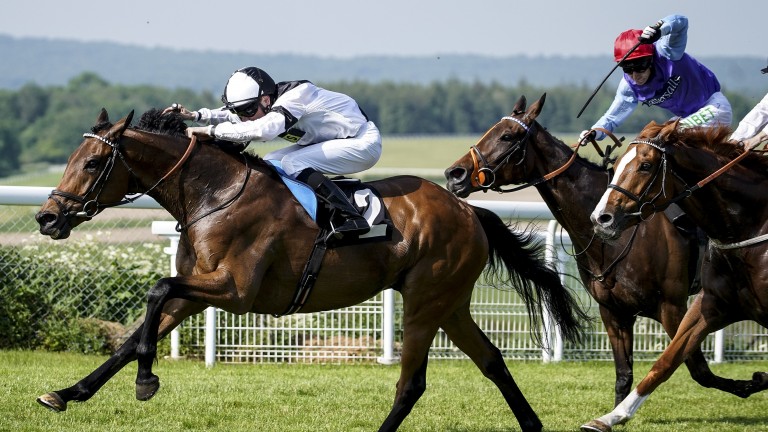 Platitude in winning form at Goodwood earlier in the year
Alan Crowhurst/Getty Images
1 of 1
By Robbie Wilders UPDATED 6:20PM, SEP 3 2018

The pick of the domestic action on Tuesday is at Goodwood, where a couple of key players in the 2m Royal Sussex Regiment Handicap (4.10) are bidding to make quick amends following defeats at York's Ebor meeting just over a week ago.

Platitude, last seen finishing tailed off in the Ebor behind Muntahaa, aims to put that effort behind him at trainer Amanda Perrett's local course.

Perrett is operating at an impressive 31 per cent strike-rate over the last fortnight and Platitude has already shown a liking for Goodwood, winning twice in five appearances there including victory in a 1m6f handicap four starts ago from a 2lb lower mark. He races off 104 here and has to shoulder top weight.

Soldier In Action winning a juvenile hurdle when formerly trained by Nicky Henderson
MARTIN LYNCH
Soldier In Action has lived up to his name this year with a busy campaign for Mark Johnston, but he continues to tumble down the ratings and also ran at York, finishing fifth in the Sky Bet Handicap off 94.

On the same mark here, he can continue to be competitive and Charlie Johnston, assistant trainer to his father, said: "He has good form at Goodwood and we think he has a good chance. He ran well at York for a long way and the forecast cut in the ground should suit. All the conditions look in place for a big run."

We have grown accustomed to seeing the colours of Leicester City owner Vichai Srivaddhanaprabha on British racecourses this season, and one of his better two-year-old fillies, Aim Power, takes her chance in the fillies' nursery (3.40).

Last seen finishing fourth behind the promising Antonia De Vega over seven furlongs at the course ten days ago, the Richard Hannon-trained filly steps down a furlong and will be ridden by Ryan Moore.

Hannon, who also runs the same ownership's Chonburi, said: "Aim Power has a good chance. She ran well in a Group 3 previously and continues to keep improving. 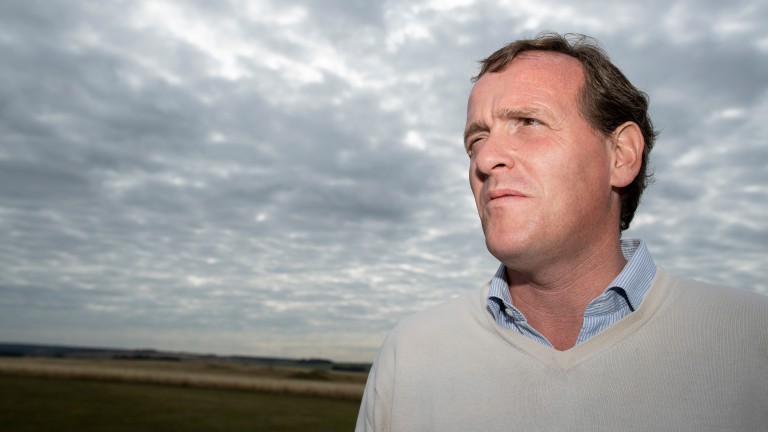 Richard Hannon with a couple of chances in the nursery
Edward Whitaker
"Chonburi has plenty of speed and has been going well at home but you'd have to say Aim Power has the better chance of the pair."

Prairie Spy is the Mark Johnston representative and his assistant Charlie is keen to forgive her last run, saying: "You can put a line through York, she was the only horse to race far side which made it a non-event as everything happened stands' side.

"We thought she was well handicapped going into that race and a mark 2lb lower should be within her reach, although both of her wins were on fast ground and a softer surface is an unknown."

Connections of Too Darn Hot will be keen to see how Calculation fairs in the mile maiden (3.05), as Sir Michael Stoute's colt finished third to the ante-post Derby favourite on his debut. By Dubawi out of Gold Cup winner Estimate, he races in the royal colours and improvement looks guaranteed.

John Warren, racing manager to the Queen, said: "Calculation ran a nice race first time and, in typical Sir Michael style, should come on from the run.

"We've always thought him to be a nice colt and this will give us a little more idea of what we have."

Charlie Johnston was pleased with what he saw from Sir Ron Priestley first time out, saying: "It was an impressive debut but greenness got the better of him that day. He got the hang of things slightly too late but the form still looks solid.

"He had a slight hold-up as we were aiming him at a Glorious Goodwood maiden last month, but he's back on track now."

FIRST PUBLISHED 6:00PM, SEP 3 2018
You can put a line through York. She was the only horse to race far side which made it a non-event as everything happened stands' side