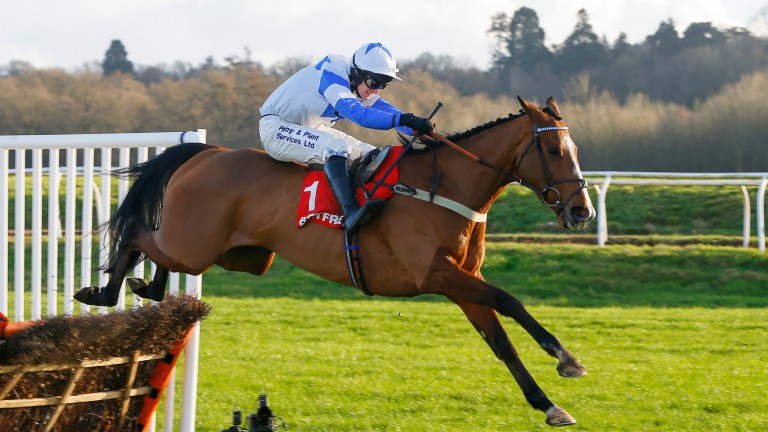 Barters Hill, beaten only once in eight starts, makes his chasing debut in a race with an outstanding pedigree for producing future champions.

He suffered his only defeat in the Albert Bartlett Novices' Hurdle at last season's Cheltenham Festival, in which his attempt to repeat his customary front-running role was foiled only after he stumbled after the last flight.

As a debutant over fences, Barters Hill receives 5lb from winning chasers Flying Angel, Its'afreebee and Theinval, and 8lb from Rock The Kasbah, whose victory came in a higher-class contest.

Source of future stars
In the last ten years this race has been won by Denman and Imperial Commander, winners of the Cheltenham Gold Cup, Dynaste, who won the Ryanair Chase, and Taquin De Seuil, who went on to land the JLT Novices' Chase. Last year it went to More Of That.

Age matters
Nine of the last ten runnings have been won by six-year-olds, which could count against the five-year-old Flying Angel and Sizing Tennessee, who is already eight.

No course form
Not one of today's runners has winning form on the course; when Rock The Kasbah (once) and Sizing Tennessee (twice) ran at Cheltenham they finished tailed off.

Philip Hobbs, trainer of Rock The Kasbah
He's been in very good form since his Chepstow win and two and a half miles on ground on the easy side will suit him well.

Nigel Twiston-Davies, trainer of Flying Angel
He didn’t seem right last time, so we've given him some time off and hopefully he's come back better than ever.

Dan Skelton, trainer of Its'afreebee
It was nice to have got a win under his belt before coming into this. It's a massive step up in a completely new set of conditions. It will show us where we go for the rest of the season. He was third in the Neptune last season.

Nicky Henderson, trainer of Theinval and O O Seven
Theinval has been on the go longest and running very well, but he has a penalty. He's a good-ground horse and might well be coming up for a winter break, but he's so well in himself. O O Seven is on the way up. His schooling has been great and he loves good ground. Two and half miles should be okay to start, but I suspect he' ll get three eventually.

Ben Pauling, trainer of Barters Hill
He's best in at the weights on hurdle ratings. Some of his opponents have had a run under their belts, but Barters Hill is a very nice horse who's in sparkling form. I hope he runs a race we can proud of. He's a horse we all need in the yard. It's a big day and deciding to release him at Cheltenham puts a bit more pressure on. He'll do his damnedest, as he always does.

Colin Tizzard, trainer of Sizing Tennessee
He's a good horse and the amazing thing is that he's still a novice at the age of eight, because he looks every inch a chaser. He seems to jump beautifully. I hope the ground is good to soft, and we'll see where we are with him.