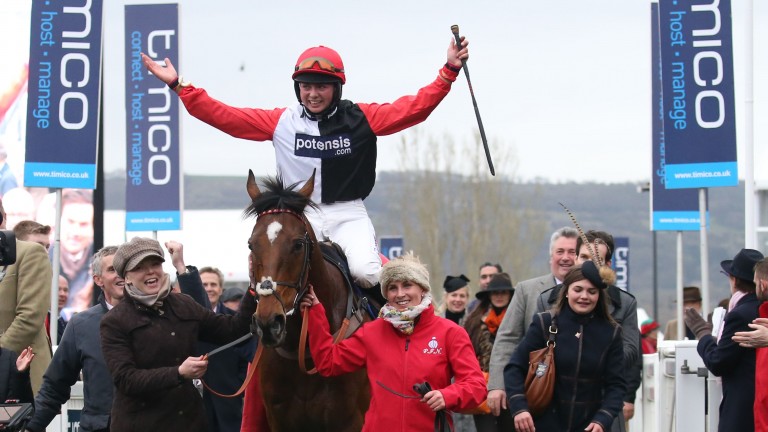 Connections have paid tribute to dual Cheltenham Festival winner Pacha Du Polder, who was retired after being pulled up in Friday's Foxhunter Chase.

The 12-year-old, who was trained by Paul Nicholls, won back-to-back editions of the race under Bryony Frost in 2017 and Harriet Tucker the following year.

He also finished fifth in the race when ridden by Olympic-winning cyclist Victoria Pendleton in 2016.

Nicholls said: "Pacha has been awesome. He's won two Foxhunters and been a great horse all along. He'll have a great home now. Lucy Sharp, who has always looked after him, and my daughter Megan, are going to have him between them and ride him, go hunting, showing all sorts of things.

"He's going to be spoiled for the rest of his life and do plenty. Victoria, Bryony and Harriet had amazing days on him and he's just been brilliant."

He won ten races in his career, winning the Grade 2 Future Champion Novice at Ayr and the Greatwood Gold Cup at Newbury before being sent hunter chasing. He earned £178,811 for connections.

Owner Andy Stewart added: "He's done very well for us and we're very pleased for him. He's been a great horse throughout the years.

"We were so proud that he and Victoria Pendleton took horseracing from the back page to the front page, and then he won the race."

His first Foxhunter success handed Bryony Frost her first Cheltenham Festival winner, while last season's success proved a phenomenal one with Harriet Tucker battling to win by a neck despite her right arm being dislocated in the final stages.

Stewart said: "He's been a great horse for Bryony Frost and it has been great to see her do so well since then, especially in the Ryanair. She has come through and it's great that she, and Harriet Tucker, have taken the female riders up the ladder.

"We have done well in the race and we will have to have a look at other horses in the race so we can look forward to having runners in the next few years."