Another big Saturday winner for ten-time champion trainer Paul Nicholls courtesy of Frodon in the Cotswold Chase has raised his hopes of adding another title to his CV.

Not only did the £56,536 prize keep Nicholls ahead of defending champion Nicky Henderson, but it also gave his Ditcheat team a second Magners Cheltenham Gold Cup contender alongside King George VI Chase winner Clan Des Obeaux.

Nicholls said on Sunday: "We managed to get to the top at Christmas, having had hardly any runners until Chepstow in October, and we have stayed there despite a quiet time this month."

View the result and replay of Frodon's Cotswold win here

January has traditionally signalled the calm before the storm for Nicholls, even in his title years, although eight wins this month is up on three in 2018.

More impressive, raising title hopes, is the prize-money haul. Nicholls collected £750,000 in December with three strikes at the top level, while his eight winners so far this month have yielded a few pounds short of another £250,000.

He said: "Things haven't been going badly for the last couple of seasons – we've topped £2 million consistently – but have just lacked the high-profile horses who always carry you.

"These are exciting times again and reward for the patience of owners and the hard work of the staff as we have brought along young horses, like Clan Des Obeaux and Frodon, who were always going to be chasers."

Frodon has added his name in no uncertain fashion since a wind operation and with his owner Paul Vogt "very keen" to take the Gold Cup option over a tilt at the Ryanair, another Grade 1 is in the trainer's sights.

He added: "The Ryanair will remain an option if it is very testing ground and we won't make a definite decision until later.

"After his three runs he had a quiet month before picking him up but I thought he was plenty burly enough on Saturday – he is being trained for March – and there is plenty of improvement to come.

"I'm not worried about the trip – he was big and bold at the last so I know he wasn't tired and he is just idle and will do just enough.

"A Grade 1 is different and if he is in the first four I will be thrilled."

This leaves Nicholls with a Grade 1-winning lead of more than £140,000 and Cheltenham will play a pivotal part in deciding the title, for which he is a top-priced 7-2, behind 1-4 shot Henderson. 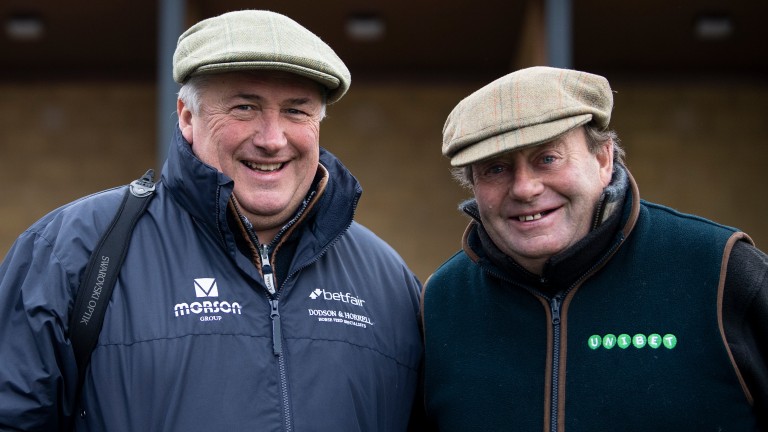 He said: "We have a nice team to take to Cheltenham but the festival is not the be-all and end-all.

"The horses will be running where they have realistic chances, before and after Cheltenham, and I have lots of nice horses to run through the spring, particularly in April."

Nicholls said: "He's an exciting horse who has done nothing wrong but he has been busy and is one I didn't want to run in January. It looks an open Triumph."

Dynamite Dollars, winner of the Grade 2 Lightning Novice Chase at Doncaster on Saturday, is another who might be seen again before Cheltenham.

"He only had a gallop round to win and he is another who thrives on his racing and needs to be fit so might have another race."

Politologue is on course to try and give Nicholls a fourth Grade 1 of the season in the Betfair Ascot Chase next month.

FIRST PUBLISHED 6:43PM, JAN 27 2019
These are exciting times again and reward for the patience of owners and the hard work of the staff as we have brought along young horses