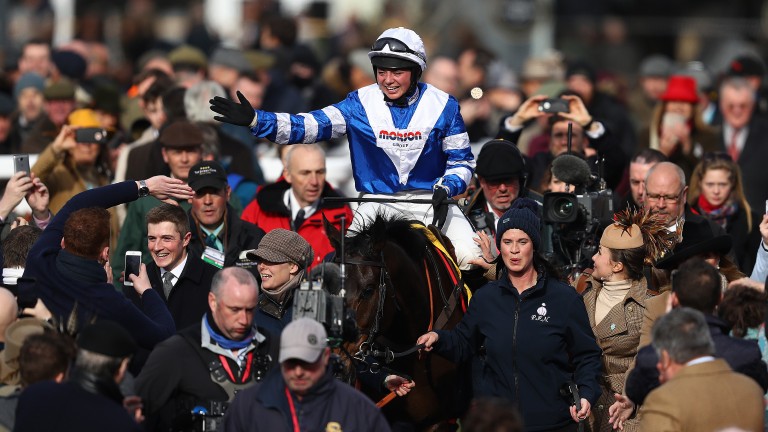 Can Bryony Frost and Frodon repeat their memorable victory from 12 months ago?
Michael Steele/Getty Images
1 of 1
By Lee Mottershead UPDATED 6:29PM, MAR 11 2020

The case for A Plus Tard

It is easy to feel a bit of a fraud opposing Min. He does have the best form. But then I watch the Dublin Chase and feel much more comfortable. He endured such a hard race.

Min's fans rage at the very suggestion that Cheltenham is not his track. They are broadly correct. Second to Altior, second to Altior, lost his head in a steadily-run race is not the record of a Beef Or Salmon-esque Cheltenhamphobe. 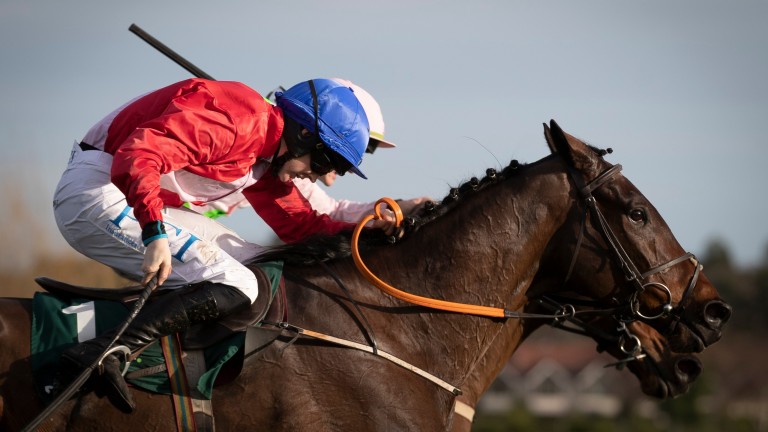 However, the way he races does lend me to think he will be at his very best elsewhere. He cruises, he stays, he does not really quicken. It is probably no coincidence that the times he has looked a proper star have been at Aintree and Leopardstown, flatter tracks where relentless pace is a greater weapon.

Conversely, A Plus Tard made his name at Cheltenham. Logic dictates that festival handicaps are not won by 16 lengths, but his Close Brothers was. He has since won a Grade 1 over 2m1f at Leopardstown, again impressing with how he was able to finish off the race.

He has been freshened up since, a preparation that mirrors last year before he ran in the Close Brothers. It is possible that Min will be able to resist A Plus Tard, but after his hard race at Leopardstown the advantage surely lies with the younger, improving horse.
Keith Melrose

The case for Min

Doing the rounds on the Cheltenham preview circuit, I was amazed at the amount of people who seemed to think Min does not like Cheltenham.

If it was not for a certain Altior he'd have won a Supreme Novices' Hurdle from a subsequent dual Champion Hurdle winner, and a Champion Chase by 11 lengths. 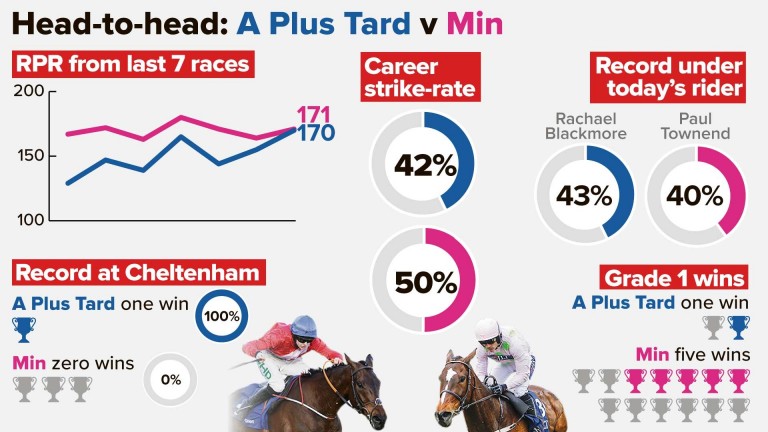 Of course, he has not won at Cheltenham because of Altior, but Nicky Henderson's four-time Cheltenham Festival winner is a true great and running second to him, even at a distance of seven lengths each time, is no disgrace.

One thing is for certain, Min's second in the 2018 Champion Chase is a much better piece of form than A Plus Tard's novice handicap victory off a mark of 144 last season.

That's not to knock A Plus Tard, now a Grade 1 winner in his own right and young and still open to improvement.

However, Min is 4-5 over around 2m4f and the Racing Post Rating he earned when winning last season's Melling Chase (180) is again miles better than anything A Plus Tard has yet achieved.

If this race was run at Aintree, or anywhere else in Britain or Ireland, I'm convinced Min would be nearer evens than 11-4.

Cheltenham or not, I think he should be.
Paul Kealy

Frost: 'He will give his all and so will I'

Two star Irish horses head the market for the Ryanair Chase but the race could deliver no bigger story than the one that last year sent spirits soaring – victory for Bryony Frost aboard Frodon.

Frost gave one of the sport's most memorable winning interviews when speaking to ITV after teaming up with a horse she adores to make almost all the running in the Grade 1 showpiece. To racing's great benefit, Frost speaks as engagingly before a race as she does once the running and jumping is done.

Due to a bout of ulcers, running and jumping was not as easy as it might have been for Frodon earlier in the season, but the Paul Nicholls-trained eight-year-old bounced back to land a Grade 2 prize at Kempton in January. 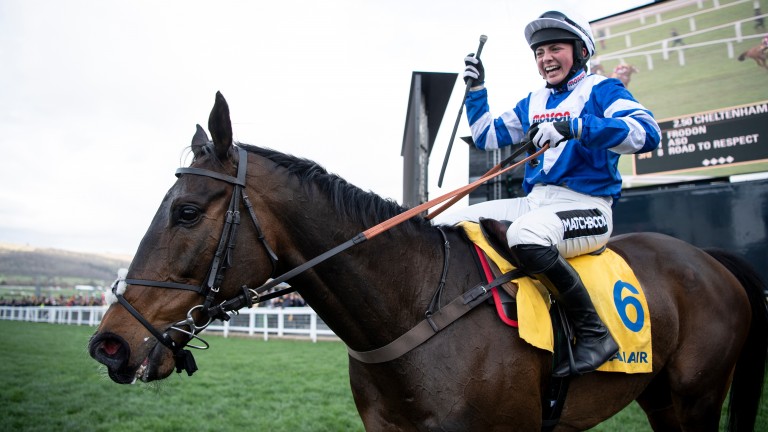 "I'm really looking forward to getting out there and galloping with him again," said Frost.

"The start of his season did not go to plan, which is maybe why some people are looking past him, but he had grade 4 ulcers, which is about as bad as you can get. To still run the races he did shows how tough and resilient Frodon really is.

"Paul and Clifford [Baker] did a brilliant job and brought him back to win at Kempton going right-handed, which is not his favoured way. We're coming to Cheltenham off the back of a good win and his confidence is high."

Frost added: "I'm in a top yard with a top horse and about to run in a top race. I'm going back to the festival on a horse that knows how to win at Cheltenham – and I know he wants to win there, which is a big thing. He will give his all and so will I." 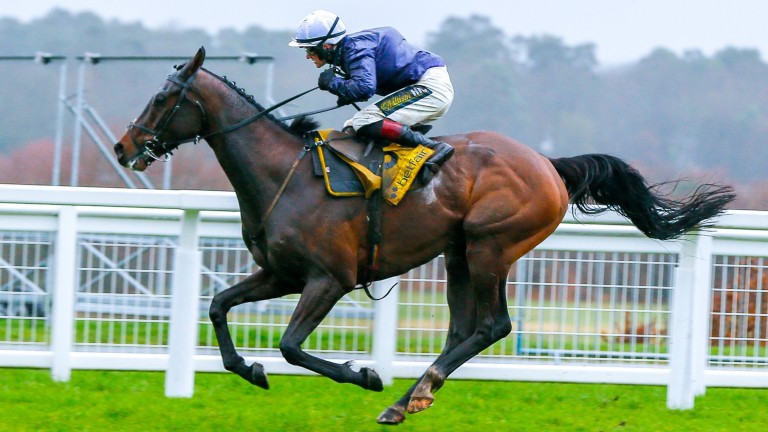 Frost is full of passion, as is owner Carl Hinchy, who is revved up at the prospect of seeing his Betfair Ascot Chase winner Riders Onthe Storm seek to complete a top-flight double.

Hinchy, who owns Riders Onthe Storm with Mark Scott, said: "We nearly won the Ultima with Shantou Flyer a couple of years ago and I was pig sick that we didn't. My son said to me: 'Show me a good loser and I’ll show you a loser!'

"We're here to win and expect a very bold show – in fact, we're going to pay for everyone to have a free ride on the Cheltenham Ferris wheel when we win. The O’Learys' trophy will be filled with Guinness and we'll be bringing it back into town later!"
Lee Mottershead

Henry de Bromhead, trainer of A Plus Tard
He won over two miles at Leopardstown but showed he operates well over this trip when he won at the festival last year and we think it will suit him well again. He has travelled over well and we're happy with him.

Venetia Williams, trainer of Aso
He has come straight here from Kempton, unlike last year when he ran at Ascot. He comes into it a bit fresher and will wear headgear for the first time. He's been a smashing horse for us.

Paul Townend, rider of Min
He's ever the bridesmaid at Cheltenham. Last year’s winner Frodon just doesn’t seem to be firing this year, although his win the last day will be a nice confidence-booster. Riders Onthe Storm has done very well since going to Nigel Twiston-Davies's yard, but I'm not sure his run the last day will be good enough to mix it with A Plus Tard and Min.

Nigel Twiston-Davies, trainer of Riders Onthe Storm
He came out of his Ascot run fine and hasn't done much wrong all season. He keeps on improving and it'll be no surprise if he does again. He won't mind the soft ground. 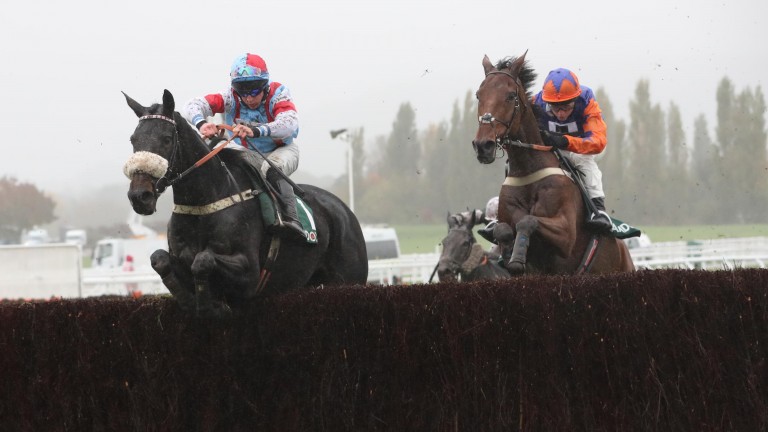 Harry Whittingon, trainer of Saint Calvados
It was a great effort last time giving 15lb to the winner. He stays the trip well and is good fresh. He has run at Cheltenham over the winter and testing ground should suit. It's a very tough race but we're very happy with his preparation.

Gordon Elliott, trainer of Shattered Love
I was delighted to see her come back to some of her old form at Gowran last time. The more I see of her, the more I think this is her ideal trip. She's very well but on ratings has it all to do.

Frodon won what was probably the deepest Ryanair yet 12 months ago and, with his perfect partner again up top, a very bold defence of his crown is likely. However, in A Plus Tard he faces a formidable opponent who has fast-tracked his way to the top since winning a handicap here 12 months ago and, still only a 6yo, has been by no means the finished article yet. Min, on the other hand, has been a regular in Grade 1s from 2m to 2m4f for some seasons and, not getting any younger, he now has an air of vulnerability about him on the really big days. Aso and Riders Onthe Storm have place claims, but perhaps no more than that.
Alistair Jones

FIRST PUBLISHED 6:00PM, MAR 11 2020
We're coming to Cheltenham off the back of a good win and his confidence is high