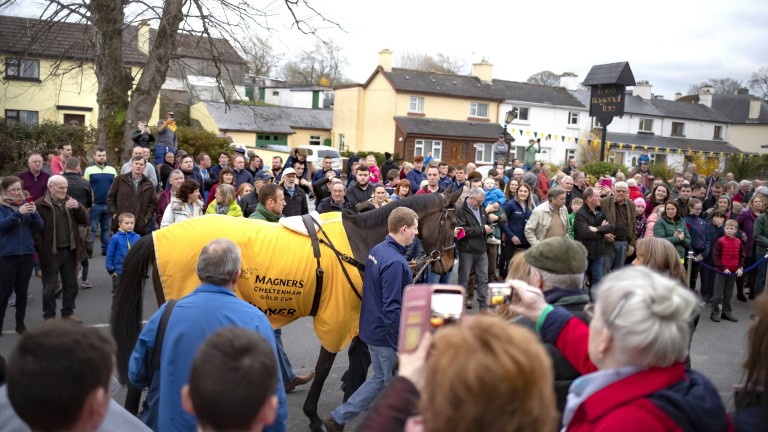 If Willie Mullins can wait 20 years to win the most coveted prize in jump racing, we can wait ten days for the party.

The Carlow town of Leighlinbridge, and the Lord Bagenal Hotel in particular, has been preparing for this very night since 1999. It has been a long time coming but, two decades after Florida Pearl was sent off a red-hot 5-2 favourite to claim the Cheltenham Gold Cup, the wait is finally over.

Al Boum Photo was probably not the horse Mullins imagined parading through the streets of his home town but the seven-year-old is now a household name in the locality and a crowd of almost 500 has turned up to celebrate the success. They love their jump racing here, but they love Mullins more.

“Willie is such a gentleman,” says James Kehoe, owner of the hotel. “You would not believe the amount of people who inquire about him in the bar and ask whether he's been in. His record speaks for itself. He’s a legend, but he’s a gentleman too and that’s why he is so popular.”

Mullins is humbled by the whole occasion.

“A lot of people have made a big effort to come out on a Monday night. That means a lot. I had no idea how many people were going to turn up, so to see such a big crowd here is fantastic. It's great to see so much interest in the locality," he says. "I see a lot of familiar faces, and a lot of people who I don’t recognise who have come up and shook my hand. It’s fantastic.” 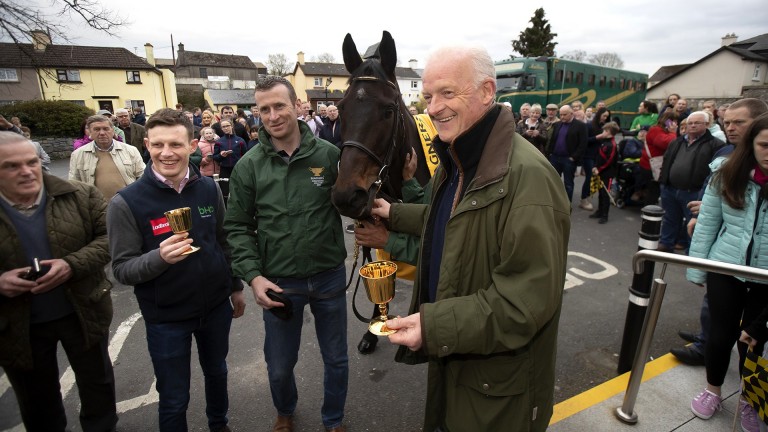 Al Boum Photo is a byword for serenity. Nothing fazes him, not even the heat of battle in the Cheltenham cauldron, but he is on his toes tonight. He is livelier than usual, a good sign according to the man who knows him best. So good, in fact, we will get another glimpse of him in action this season.

“He was a little sharper than I thought he would be,” Mullins admits. “He is usually very, very laid-back, but he obviously came out of the race well and is well rested. I'd like to bring him back to Punchestown, that's my goal. I know it’s dry but Punchestown usually waters well so I would like to run him there.”

Paul Townend can’t stop smiling. “It is every bit as good as I thought it would be, it’s actually better. The best thing of all is seeing so many young kids here,” he says.

Those kids are all waving yellow and black chequered flags, the Al Boum Photo colours of owner Joe Donnelly. Orlagh Fallon was here in 2005 when Hedgehunter won the Grand National and she has brought her six-year-old son Freddie along to celebrate the occasion this time.

“I was here with my dad John after Hedgehunter won the Grand National and he had to go for a stress test the day after!” laughs Fallon who only lives a mile down the road. “It is just great for the locality, it's such a lovely atmosphere.”

One woman who has seen it all and was at the centre of the celebrations when Dawn Run won the Gold Cup back in 1986 was Willie’s mother Maureen, who has not missed a Cheltenham Festival in the last 66 years and speaks a lot of sense.

“I don’t think you will ever see it done again, what Dawn Run did. If you have a mare good enough to win a Champion Hurdle now you would never chance her over fences," she says.

“It’s been a long time coming,” says Willie’s wife, Jackie. “It wasn’t looking good on the first circuit, that’s for sure, with the other three gone but we got there in the end.”

“We’re starting early so it could go on for a while. It could be a long night and we’ll enjoy every minute of it,” says Cheltenham’s most successful trainer.

You deserve every drop, Willie.

FIRST PUBLISHED 7:53PM, MAR 25 2019
We?re starting early so it could go on for a while. It could be a long night and we?ll enjoy every minute of it

'She'll be a big player in the Cesarewitch' - five who caught the eye at Galway Fan De Blues follows in some famous hoofprints to win Grade 3 novice chase Racing greats gather together for charity bike ride in memory of Pat Smullen Plucked from obscurity, The Shunter could now add Galway Plate glory to his haul Decision made: superstar mare Honeysuckle set to stay over hurdles this season