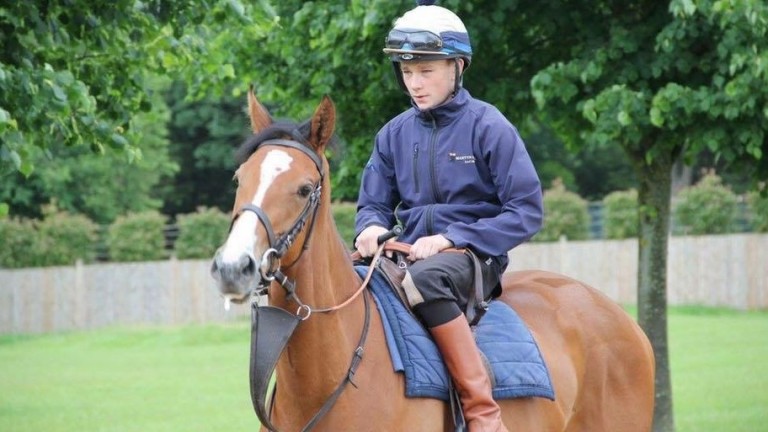 Jamie Parkes: close third on race-riding debut at Wolverhampton on Wednesday
1 of 1
By James Burn UPDATED 10:25AM, MAR 19 2018

He didn't manage to score on his debut, but Jamie Parkes – the former Notts County academy player deemed too small for football – was still all smiles after his first ride at Wolverhampton on Wednesday.

Parkes, who is based with Martyn Meade and will follow the Newmarket trainer when he makes his imminent move to Manton, was riding the stable's Sociologist, who finished third at 12-1 in a 1m1½f handicap.

"It was excellent – the best feeling I've ever had," reflected the 18-year-old.

"The build-up in the day made me really nervous and I wanted to get there nice and early and be prepared for it, so I had a long time to wait, but as soon as I put my silks on, the nerves did half go. As soon as I got on the horse I felt all right, although I was a bit nervous behind the stalls.

"With him being 12-1 and it being my first ride, there wasn't too much pressure and it was more about enjoying it. He travelled well and I had a good draw, which really helped on my first ride. He never stopped travelling and quickened off the bend and I was only beaten a neck and a neck.

"About a furlong and a half out I thought maybe I was going to win it, but it was really good and I loved it."

A graduate of the Northern Racing College near Doncaster, Parkes, who did not sit on a horse until he was 16, had a six-month spell with Mick Appleby after being encouraged to swap shinpads for stirrups by then academy boss Mick Leonard.

He then moved to Newmarket to link up with Group 1-winning trainer Meade and has shot up to 5ft 8in from 4ft 11in.

"There are no regrets," the apprentice added. "For the first year it was tough seeing all my old football mates go on and do well, which was brilliant, but there was still the odd thought of maybe it would have been nice.

"Now I'm in the racing game, and since I've joined Martyn and really knuckled down, this is what I want to do for sure. I've grown a lot but I feel if I had the opportunity to go back to football I wouldn't."

FIRST PUBLISHED 6:00PM, MAR 17 2018
I was only beaten a neck and a neck. About a furlong and a half out I thought maybe I was going to win it

'I was okay until about 1.30 - maybe it was too many glasses of red wine' William Jarvis: 'I'm told I should be richer by now - but I'm not bitter at all'