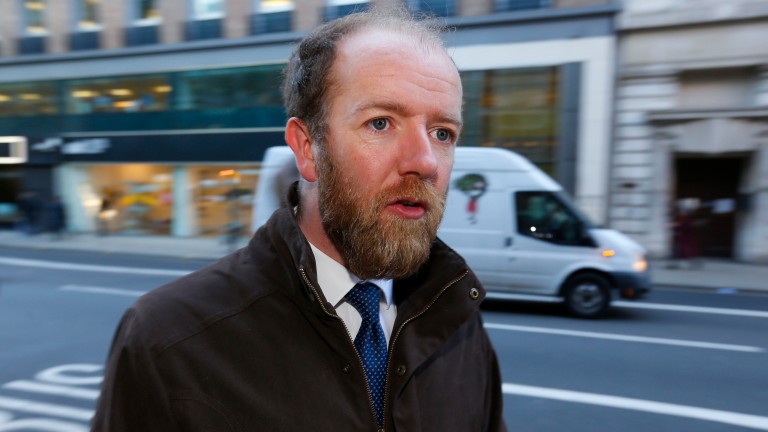 Trainer Jim Best at the BHA, where a panel is rehearing an inquiry into whether he ordered Paul John to stop two horses
Dan Abraham
1 of 1
By Bruce Jackson 6:48PM, NOV 25 2016

The BHA panel rehearing the case into whether Jim Best ordered his then-conditional jockey Paul John to stop two horses last December were on Friday asked to ignore the video evidence and "lies" of the rider.

That was the request from Jonathan Laidlaw QC, representing Best, in summing up on the fifth day of the hearing as he cited the reasons why John had lied and also struck an alleged deal with the BHA to appear as the only witness against his former boss.

John has since been granted an amateur rider's licence to partner the point-to-point horses he has on his Devon farm.

He had told the hearing earlier in the week he had been instructed by Best to stop Echo Brava at Plumpton and Missile Man at Towcester three days apart last December.

John left Best the following week, never to return, to spend Christmas at home either with his ailing mother or to party away with friends, depending on which side's argument is to be believed.

Laidlaw said this in effect ended his riding career and made his situation "hopeless" as the BHA had warned him he was expected to stay with Best for 12 months after moving from three other trainers in the previous 18 months.

Laidlaw said: "If the panel were being asked to make an assessment as to how the jockey ran a race, then of course the videos would be the primary source of evidence, but this is not what this is concerned with.

"It is concerned with whether John received stopping instructions from Jim Best and that is dependent on the credibility of Paul John. That credibility is so shot and flawed that is the end of the case."

Louis Weston, for the BHA and arguing against such a view, said: "We put emphasis on the videos over everything else as they are objective and contemporaneous."

Laidlaw repeated his concerns over the "unhappy history" of trying to uncover a deal he said was made by the BHA with John and his solicitor Rory Mac Neice after the jockey received notice of the serious charges he faced in relation to both rides.

Weston said this related to John raising concerns about the "repercussions about giving evidence against Best and his eagerness to get his licence back".

'I had to leave racing'

Paul Cooley, former head lad to Jim Best, had earlier accused the BHA of ruining his riding career by not renewing his licence this year, with the authority citing his involvement in the case.

Cooley, 22 and about to become a father, said: "I had to leave racing as the BHA did not make a decision about my apprentice licence. I still think there was a chance I could make it as a rider."

After a hiatus while trying to contact Jamie Moore for his evidence, with the jockey's car phone cutting out twice on his way to ride at Doncaster, the panel accepted the rider's original evidence, given to the previous inquiry.

After recessing to read each side's closing argument, the disciplinary panel concluded with some questions of clarification, before panel chairman Sir William Gage confirmed their decision would not be reached until into next week.

FIRST PUBLISHED 6:43PM, NOV 25 2016
It is concerned with whether John received stopping instructions from Jim Best and that is dependent on the credibility of Paul John. That credibility is so shot and flawed that is the end of the case