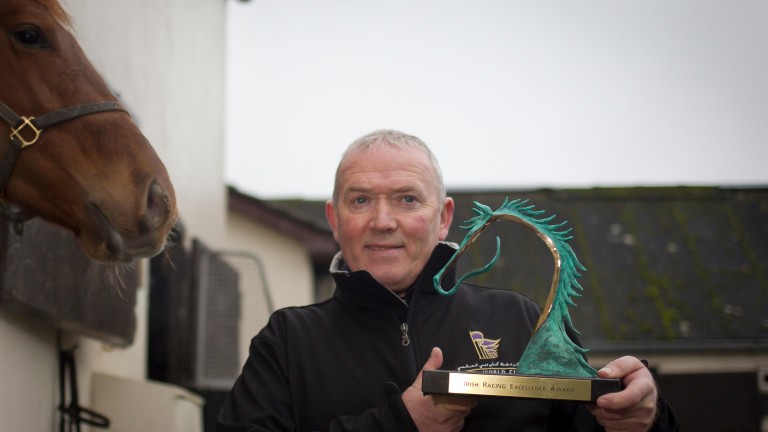 O’Neill has been an integral part of John Oxx’s Currabeg stables in County Kildare since he joined forces with the legendary trainer upon graduating from the Racing Academy and Centre of Education (Race) in 1974 and describes winning the award last year as a great honour.

He said: “It was a fantastic feeling even to be nominated, but I was completely shocked when I won it.

"It was only afterwards that I realised how special an achievement it was and I was honoured to win it. Racing is a community and nights like these boosts the morale of everyone in yards up and down the country.

“Every person who receives a nomination would be deserving of winning as there are just so many people on the ground working hard in every kind of discipline within the sport. From transport to breeding and even newcomers, there are categories for everyone at the awards and I would urge trainers to get their nominations in before Friday.”

O’Neill is now the longest serving member of staff at Oxx’s stable as he approaches his 43rd year in employment there after progressing up through the ranks to occupy the head lad role.

He has witnessed horses like Sea The Stars, Azamour, Alamshar, Ridgewood Pearl and Sinndar write their names into racing’s annals and points to working with a variety of different horses as the main attraction of the job.

“Working in a Flat yard you are dealing with new two-year-olds every season and we have been fortunate enough to have been a part of a lot of brilliant horses' careers in Mr Oxx’s," he said.

"It’s highly unlikely that we will ever see another Sea The Stars, but that’s the dream and that’s what enthralls everyone about the sport, the search for the next star.

“It can be hard work but one good horse can make your year and it’s a fantastic feeling watching young horses progress with each race on the track. In racing there is something different every day, and that’s what I love about it.”

O’Neill will be on the judging panel at the awards ceremony that takes place at the Newpark Hotel in Kilkenny on May 9, where a prize fund of €80,000 and specially commissioned trophies will be presented to the winners across ten different categories.

Nominations can be made online at studandstablestaffawards.ie and the website also includes information on all award categories as well as footage and images of previous winners.