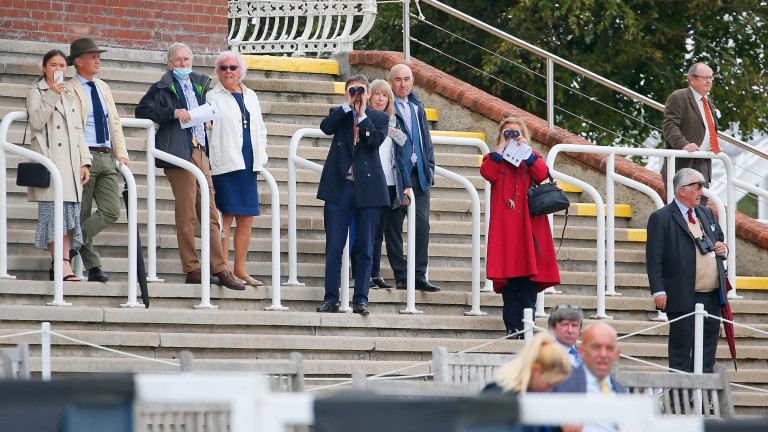 Owners watch the action at a behind-closed-doors meeting at Goodwood
Mark Cranham (racingpost.com/photos)
1 of 1
By Peter Scargill UPDATED 1:36PM, NOV 1 2020

Owners in Britain face the prospect of being barred from racecourse attendance under a new national coronavirus lockdown due to be imposed in England from Thursday, with the BHA seeking clarification from government this week on the issue.

Owners have been able to attend courses in limited numbers since July 4, having initially been unable to go when racing returned on June 1, but new government guidelines limiting 'non-essential travel' risk them being forcibly shut out.

Racing in Britain will be able to continue behind closed doors under the new restrictions, which are set to be imposed from Thursday until at least December 2.

BHA chief executive Nick Rust described the decision as “a relief”, while adding the authority will be seeking clarification on the position of owners over the coming days.

He said: “It’s a relief [racing is on] and it’s testament to the team effort in the sport for following some tough protocols and managing a lot of change to help ensure we’ve run 500 events behind closed doors successfully without any evidence of transmission of the virus. We can show what an important role racing plays in our national life over the next month.

Nick Rust: "main thing is to make sure we comply and keep racing going for the next month"
John Grossick (racingpost.com/photos)

“Fundamentally on first assessment last night our only query outstanding was around the participation of owners. Obviously we’d love them to keep coming but there have been some tough restrictions reimposed on hospitality so there are no guarantees on that.

“We’re going to fight hard for that but the main thing is to make sure we comply and keep racing going for the next month. We made the case to bring back owners on the basis they were an essential part of the activity but the sentiments are very much around essential work, so we’ll have to view it in that context.”

Rust insisted the BHA and other racing organisations would continue to lobby government for the return of spectators in spite of the latest Covid-19 measures, insisting that having patrons back on racecourses by the spring was essential for the future of the sport.

“A massive issue is facing the sports sector, and the racing sector in particular, if we’re not able to bring spectators back,” he told Racing TV’s Luck On Sunday.

“We’re not expecting to have pilots back before Christmas but we need to pave the way for pilots in January and February and look to bring spectators back from the spring period onwards.”

The possibility of the national lockdown in England being extended beyond December 2 was raised by Michael Gove, the minister for the cabinet office, if the restrictions brought in did not sufficiently dampen down the infection rate to allow the Tier system to be reintroduced.

Asked on Sky News if the national lockdown could be extended, Gove said: "Yes.”

He added: "We want to be in a position where we can – and I believe that this is likely to be the case – have an approach where if we bring down the rate of infection sufficiently we can reduce measures nationally and also reduce measures regionally.”

Wales is already under tight restrictions as part of a two-week 'firebreak' lockdown which is due to last until November 9, while a five-tier restriction system is in place in Scotland.

FIRST PUBLISHED 10:55AM, NOV 1 2020
We’re going to fight hard for that but the main thing is to make sure we comply and keep racing going for the next month