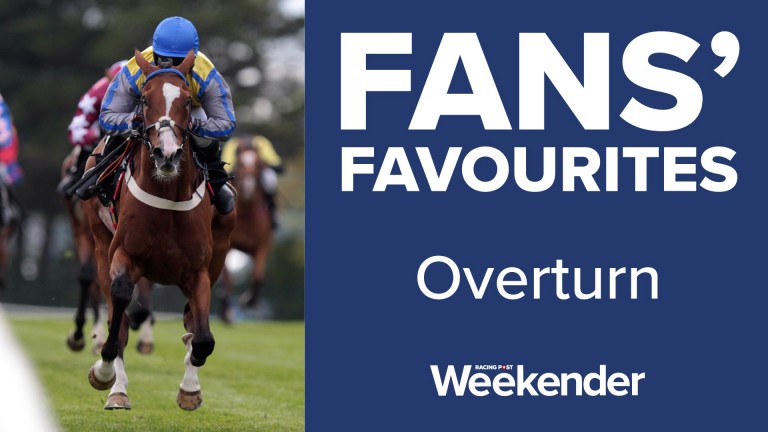 If the old adage that God loves a trier is true, then there would be few horses he adores more than Overturn.

If you’re a racing fan, all you ever want when watching a race is to see your horse try its absolute best to win, and although that can be sporadic with some, it is something you could always be assured of when Overturn lined up on the track.

Few horses over the past decade have shown the same guts and never-say-die attitude, and that he proved himself on the Flat, over hurdles and over fences only goes to make him even more loveable and all the more impressive. 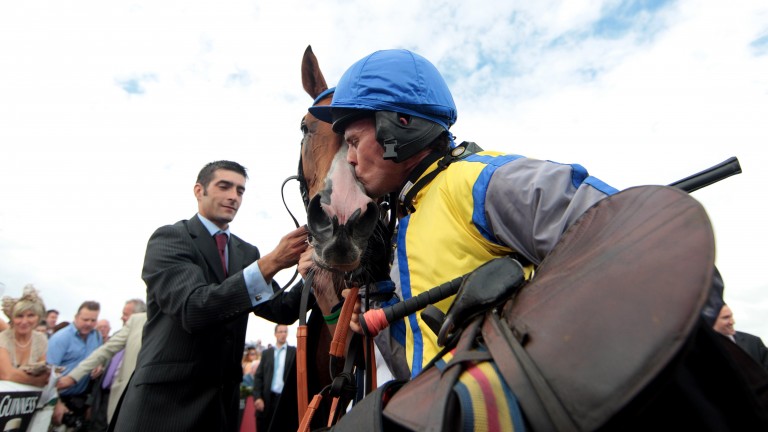 Overturn’s CV is as tremendous as it is diverse, having won 14 of his 42 races, of which four were on the Flat, seven over hurdles and three in chases.

Not a bad result for a horse who, as a five-year-old, had won just two of his 11 starts and had a rating of 88 on the Flat for his final run for Walter Swinburn at Salisbury.

He won a Class 3 handicap that day, beating Omokoroa by half a length, which was crucial because Omokoroa was owned by one of Donald McCain’s owners at the time. The trainer happened to be watching the race and was so taken by Overturn’s success he bought him at the Doncaster sales just over a week later for £75,000.

McCain explains: “I’d seen his last race on the Flat at Salisbury, where one of my owners had a runner in the race, and my owner’s horse finished second to Overturn.

“He really caught my eye that day as he just looked like a horse with a fantastic attitude. He looked like being beaten a couple of times but just wouldn’t be beaten, pure and simple.”

Initially things did not go to plan for Overturn, who failed to win any of his first four races over hurdles for his new trainer, which left McCain scratching his head.

“It didn’t go well to start with,” admits McCain. “He was a horse who was pretty keen and forward-going, so we tried to settle him and get him to switch off initially, which just wasn’t happening.”

One of the attributes that made him such a fan favourite was his racing style. He would set off, go straight to the front and almost dare any other horse to come and challenge him. Now, McCain was ready to take the shackles off. It is a move that would be the making of Overturn.

“We decided to just let him loose,” says the trainer. “Brian Harding rode him the first day at Ayr and he bolted up. It wasn’t until Ayr that he became a different horse altogether. After that he won his next two up there, with the third being the Scottish Champion Hurdle.”

In less than six months, McCain had transformed Overturn from a medium-grade Flat handicapper to a hurdling champion and that was the start of a memorable run of races.

He finished second in the Swinton Hurdle next time to Eradicate, which McCain believes he should have won were it not for allowing another front-runner to dictate the pace.

The trainer would not make that same mistake again, though, and there would be no looking back for Overturn – only from his rider to check on his rivals.

Over the next 12 months he won the Northumberland Plate, the Galway Hurdle and the Chester Cup, while also finishing second to Binocular in the Christmas Hurdle, truly making his mark as one of the best dual-purpose runners of the decade.

Those are memories McCain looks back on fondly.

He recalls: “The Northumberland Plate went great and his second to Binocular at Kempton on ground that would have been slow enough for him was superb.

“But there were two standout moments for me. Chester was fantastic as you don’t see many Chester Cups run that way – it was an end-to-end gallop from the start, and from the four-furlong pole Eddie Ahern sent him for home and they were strung out all over the track. If they hadn’t had the rail out 100 yards, he’d have broken the track record. It was an exceptional performance.

“The other outstanding run was Galway. I remember that day I was standing out on the track with Gordon Elliott, and when Overturn landed over the first in front I turned to Gordon and said ‘that’s it, all over!’ He looked at me a bit funny but you became that confident about Overturn.”

The following season he reached the top of the mountain and conquered Newcastle as he defeated Binocular to win the Fighting Fifth – the only horse to win the track’s hurdling Grade 1 and the Northumberland Plate. 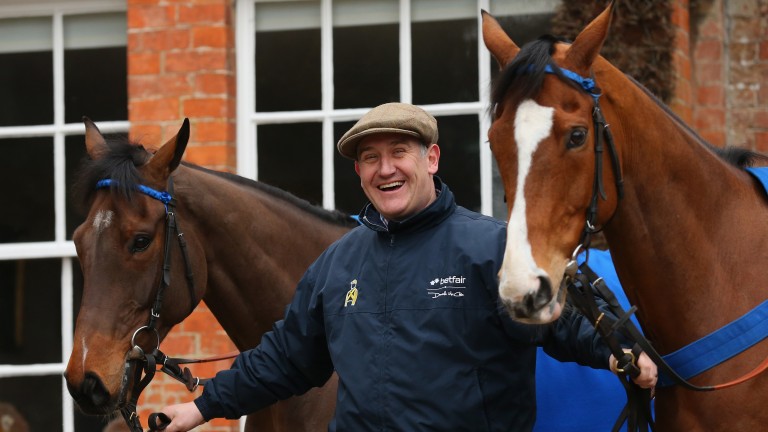 In March 2012 he finished second to Rock On Ruby in the Champion Hurdle at Cheltenham. But that isn’t a defeat McCain rues – quite the opposite.

He explains. “Peddlers Cross was second in the Champion Hurdle the previous year, which was a disappointment in some ways because he’d never been beaten until then. Overturn managing to finish second was an absolute thrill because he was for the most part a seriously good handicapper.

“Would we have ever classed him as top class? Possibly not. But what he did do was turn up almost every single time. So for him to reach that level was a huge thrill and we were absolutely delighted with him. There was no disappointment, we couldn’t have been more the other way.”

The following year Overturn returned to Cheltenham an unbeaten novice chaser targeting the Arkle, but soft ground put paid to his chances and he ended up finishing
fourth.

The next month he went to Aintree to contest the Maghull and was runner-up to a rank outsider. That 28-1 winner turned out to be Special Tiara. 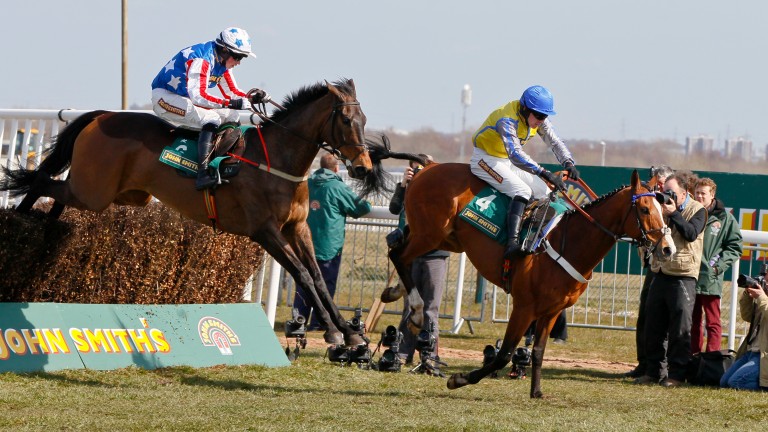 “At the time I couldn’t quite believe he got beat at Aintree,” says McCain. “He got to the front and was two clear jumping the last only to be chinned by the big outsider. Of course that outsider went on to be a Champion Chase winner, but it was a tough one to swallow.”

That narrow defeat to Special Tiara in the Maghull at Aintree proved to be Overturn’s final race. He suffered a hind suspensory injury that day and, with time beginning to catch up with him, the decision was made to retire him after the injury persisted.

It was a sudden end to what had been a magnificent career and a rollercoaster ride for McCain, who even seven years later still has nothing but praise for his little superstar.

He says: “It was his way of racing that people enjoyed and that’s the one thing you always want. If a horse turns up day after day and does its best then you can’t ask for any more. To be involved with him and the way he did things was absolutely unreal.”

While Overturn’s time on the racecourse has been finished for some time, the little horse is enjoying a fulfilling retirement in his owner Tim Leslie’s field, basking in the sunshine with his old friends. He still even occasionally pops back to visit Donald McCain and see how his old stable is getting on.

McCain explains: “He summers in the field at Tim Leslie’s, but he doesn’t really love being out in the field all year round, so he tends to come back here for a bit of TLC in the winter. As we speak, he’s out in the field with Peddlers Cross and Any Given Day enjoying himself. We all owe him that.”

With Overturn popping back to McCain’s yard in the thick of the jumps season, he gives his old trainer a reminder of the glory days – a nice little boost when you’re working away on those cold, dark mornings.

McCain adds: “He’s one of those horses who puts a smile on your face every time you see him. That sounds really corny but he literally does. There’s an awful lot of memories that come rushing back – we had so many great days with him.

“When I was a kid growing up my hero was Sea Pigeon. He’s not Sea Pigeon but to even have a horse who is mentioned as one of the best tri-purpose horses there’s been has been something to dream of. The ratings he had on the Flat, hurdles and chases were exceptional for all three and he was such an absolute pleasure to be involved with.”

FIRST PUBLISHED 3:00PM, JUL 1 2020
To be involved with him and the way he did things was absolutely unreal