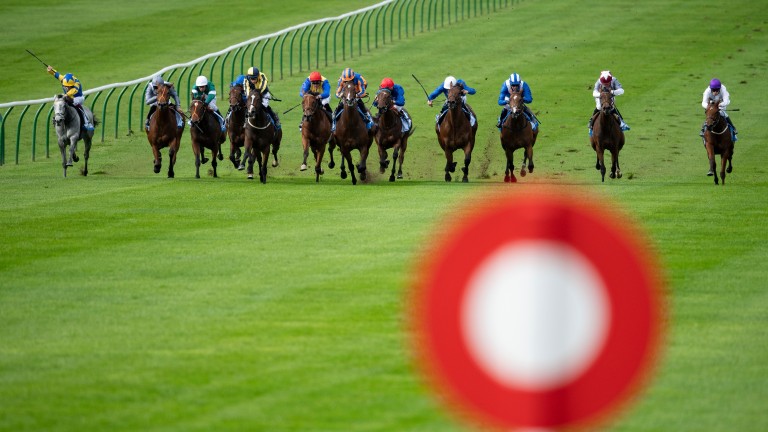 Racing makes its comeback on the Rowley Mile this afternoon
Edward Whitaker (racingpost.com/photos)
1 of 1
By Matt Butler UPDATED 2:01PM, JUN 4 2020

Racing returns to Newmarket for the first time in 2020, with Royal Ascot clues surely likely on a card beginning with six two-year-old contests.

The unraced juveniles will be tackling a quick surface, with the going reported as good to firm on the first of four days of high-class racing on the Rowley Mile. There was 1.5mm of rain reported overnight and a further 2mm between 7 and 7.30am this morning. The far side track will be in use on the opening day.

Two two-year-olds have had their debuts delayed in the 1.50, with Sidi Mansour and Ventura Tormenta both declared non-runners.

Market moves are often particularly significant with newcomers but the early-morning moves are in Newmarket's handicaps, with the Pam Sly-trained Drummond Warrior trimmed into 7-1 (from 12) in the first division of the 6f handicap (4.45). Rathbone is another mover at HQ in the 5.55 (8-1 from 10).

A busy opening week for Newcastle continues with a further ten races on the Tapeta surface, the highlight of which is the Group 3 Betway Pavilion Stakes (3.55).

The sprint, which is run at Ascot in a typical year, features last year's Norfolk Stakes and Flying Childers winner A'Ali, who is having just his second crack at the six-furlong trip.

However, the James Tate-trained Dream Shot, a length second to A'Ali in the Flying Childers, has been a noticeable mover in today's only Group race. He is available at a general 8-1 having been priced at 10-1 with most firms overnight.

The favourite for the 14-runner contest is the Marco Botti-trained Malotru. He impressed over seven furlongs at Lingfield in February and boasted good juvenile form of his own, finishing fourth in last year's Gimcrack Stakes at York.

The going at Newcastle is now standard, having been standard to slow for racing on Monday and Tuesday. Clerk of the course James Armstrong said: "We've had half an inch of rain in the last two days and it's a lot cooler, it's 10C lower than the last time we raced. It should ride bang-on perfect today."

FIRST PUBLISHED 8:28AM, JUN 4 2020
The sprint, which is run at Ascot in a typical year, features last year's Norfolk Stakes and Flying Childers winner A'Ali

Hansen makes lengthy trip to win on agent Shelley Dwyer's Trinity Girl Strong start for the north but Newmarket Red end Racing League day one on top Racing League tips: race-by-race guide to the first meeting at Newcastle tonight Nasty incident for Hart as jockey is stood down after being kicked by his mount English tracks prepared for return of bumper crowds after easing of restrictions