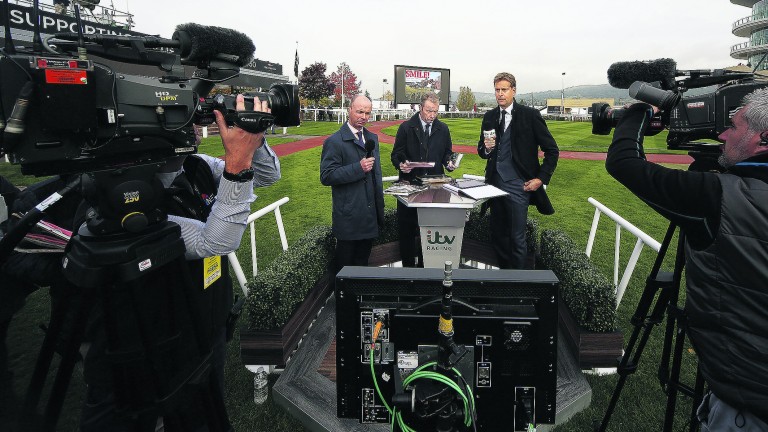 As a new year begins, so does a new chapter in the coverage of British racing on mainstream television. For the sport's latest partner the scene of its long-awaited comeback could not be better.

Cheltenham, once a bastion of the BBC and then a Channel 4 stronghold, now belongs to ITV.

Until at least the end of 2020, racing's crown jewels, from the Grand National to the Gold Cup, and from the Derby to Royal Ascot, will all be showcased on ITV, whose main channel, supported by ITV4, will bring fans nearly 100 days of action every year.

The curtain rises on the first day and the first programme on Sunday. Four contests from Cheltenham and two handicaps from Musselburgh provide the fare for a 150-minute show that commences at 1pm with former Sky football anchor Ed Chamberlin taking over from Clare Balding and Nick Luck as racing's television face.

Racing is now a stablemate of Coronation Street and Emmerdale, just as it was in 1985 when ITV gave away the last of its rights to Channel 4.

A six-furlong nursery from Redcar in the final edition of the Dickie Davies-led World of Sport represented ITV's farewell, save for it continuing to transmit a short Derby Day programme until 1991. It returns to the turf with a contest it used to show as part of the old ITV Seven – although in those days the race in question was staged at Newcastle.

The BetBright-sponsored Dipper Novices' Chase, which with its line-up of untapped potential is a sort of four-legged Britain's Got Talent, forms the centrepiece of a meeting that last year attracted a record 34,505 racegoers.

Jump racing's mecca will be packed again, when the knowledgeable audience may well see a future Timico Cheltenham Gold Cup contender in the shape of the Paul Nicholls-trained Clan Des Obeaux, an immensely impressive winner when last seen at Newbury in late November.

For Chamberlin – whose tie is 5-2 with Paddy Power to be black and 10-1 purple, with various colours and prices in between – the day's star attraction provides a link to his former job, given Clan Des Obeaux is part-owned by football legend Sir Alex Ferguson.

Indeed, this could be a lucrative afternoon for high-profile patrons, as in ITV's second Cheltenham race Nicholls saddles As De Mee for Dame Judi Dench, while in the Dornan Engineering Relkeel Hurdle the champion's trainer Old Guard runs for a syndicate that includes ITV morning staple Jeremy Kyle.

With Dame Judi in mind, and in particular one of her most famous roles, it is worth noting that Clan Des Obeaux will face a serious challenger if the Nicky Henderson-trained O O Seven returns to the form of his dazzling Cheltenham victory in November.

On his next outing at Doncaster he ran inexplicably badly, leaving Henderson shaken not stirred. He was also left none the wiser after tests provided no explanation for the effort.

Racehorses, as new viewers to racing on ITV will soon learn, are wonderful but also highly unpredictable animals.

Also unpredictable is the British weather. It could have an impact on proceedings at Cheltenham. That is in part due to the fact ITV's presenters and pundits will all be working from outdoor positions, and so are liable to get soaked, but also because last year's Relkeel winner Camping Ground and leading fancy Lil Rockerfeller want the forecast rain to come.

Others, such as 2015 festival champion Cole Harden, would much rather it stayed away. Helpfully, ITV will have its racing weather guru Lucy Verasamy as part of the coverage.

Yet despite Sunday's revival of racing on ITV being important because it introduces us to a new team, the broadcaster is keen to stress its opening programme will not revolve around those talking about the racing but rather the racing itself.

That is as it should be. Particularly, of course, when the glorious stage for the sport is Britain's very best.

FIRST PUBLISHED 4:06PM, DEC 31 2016
The Dipper Chase, with its line-up of untapped potential, is a sort of four-legged Britain's Got Talent