Our Thomas in good shape after Sedgefield near miss 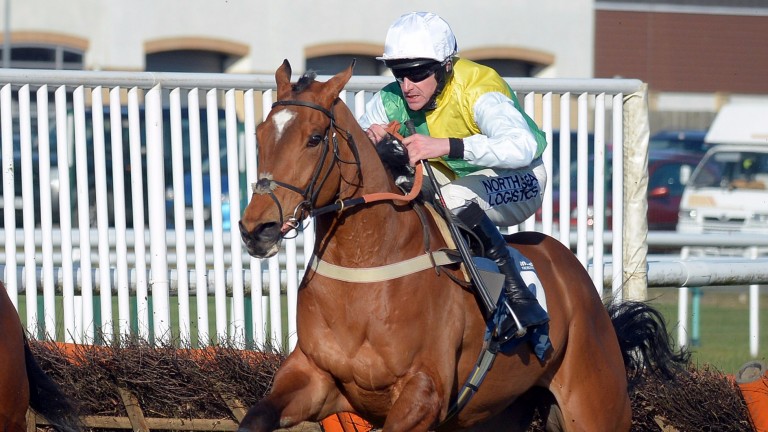 Our Thomas bids for valuable compensation at Haydock after Sedgefield defeat
1 of 1
By Richard Birch 6:12PM, APR 14 2017

Our Thomas, who looked sure to win at Sedgefield last time out only to idle on the run-in and get caught by The Character close home, bids for valuable compensation in the £50,000 Challenger Two Mile Hurdle Series Final Handicap Hurdle (3.15) at Haydock.

The Tim Easterby-trained five-year-old, backed down from 7-2 to 6-4 favourite that day, has been put up 1lb by the handicapper but still looks fairly treated on his best form.

“He’s a grand horse and goes to Haydock in good form,” Easterby said. “I think the track will suit him and he should run well.”

Alan King has a couple of interesting contenders in last-time-out winner Midnight Maestro and Paddys Runner.

“Midnight Maestro is progressing well and won in good style at Stratford just before Cheltenham, so even off a 7lb higher mark I would hope that he could again be competitive,” he said.

“Paddys Runner has been dropped 3lb since finishing second at Taunton and this is a rare chance for him to race for such good money.”

Eyes Of A Tiger represents Brian Ellison, who has been eyeing this race for some time.

“He’s ready to go,” the trainer said. “He runs well fresh and I feel he’s in really good form.”

Tom George is hoping that Stamp Your Feet, a last-gasp winner at Hereford in December, can run a big race with just 10st 3lb on his back.

“He will appreciate the slightly better ground this time, and has a nice low weight,” the trainer said.

Former jockey Christian Williams, who rode more than 100 winners for Paul Nicholls, three of them aboard the mighty Denman, saddles his first runner as a trainer in the shape of Limited Reserve, twice a winner for his previous trainer Paul Morgan this season.

David Pipe is hoping the step up in trip can unlock further improvement from Chic Theatre, his runner in the Challenger Stayers Hurdle Series Final Handicap Hurdle (4.20).

Chic Theatre hasn’t been seen since winning over 2m4½f at Market Rasen on the first day of December, but has one line of form with The Unit which makes him of considerable interest.

“We’re trying a new trip with Chic Theatre,” Pipe said. “It’s a very competitive race but he’s at the right end of the weights.”

“Like a lot of my horses at the moment he’s high enough in the weights, having won his share of races this season,” Twiston-Davies said.

“It won’t be easy for him but he’s very consistent and deserves to take his chance. There is excellent prize-money on offer.”