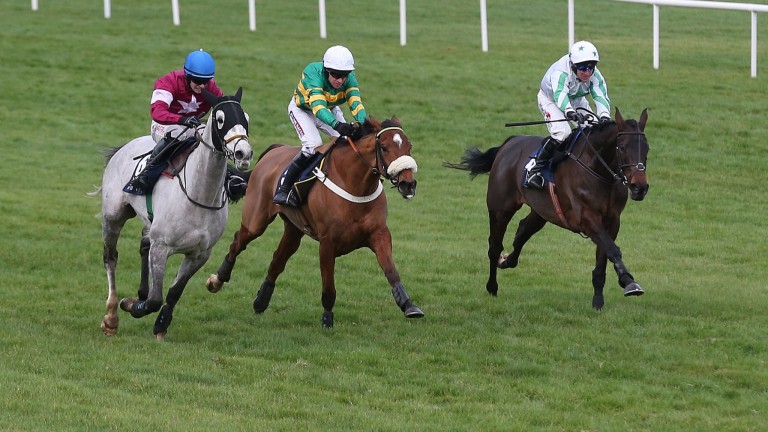 Our Duke (right): comes from third after the last fence to win the Neville Hotels Chase
CAROLINE NORRIS
1 of 1
By David Jennings 4:13PM, DEC 29 2016

Who says jumping is the name of the game? Robbie Power reckons Our Duke would have won by ten lengths had he not made a mess of a few fences along the way, but those errors did not prevent the six-year-old from winning a thrilling running of this key trial for the RSA Chase.

Power and Jessica Harrington teamed up to wins this Grade 1 and the Cheltenham Festival highlight with Bostons Angel in 2010. Don Poli did likewise in 2014, while No More Heroes might also have won both races last season had he not sadly suffered a fatal injury in the RSA.

Our Duke has certainly thrown his hat into the ring for the staying showpiece for novice chasers after this gritty triumph. Paddy Power slashed his price for the RSA into into 10-1 (from 20), while Ladbrokes and BoyleSports offered the biggest price at 12-1.

Bellshill, a winner at Limerick on Monday, hardened a point into 4-1 favourite with BoyleSports as a result.

Our Duke must have a mighty engine. He set out to make all but mistakes scuppered those plans and, when he was slower over the second-last than everything else in the field, it looked as though his chance had gone. Not so.

Power got him going again on the lengthy approach to the last and somehow managed to get up close home to deny favourite Coney Island by half a length, with the same distance back to Disko in third.

"If he'd jumped well he'd have won by ten lengths," said Power. "He must be some horse to win a Grade 1 having made so many mistakes. He learnt a hell of a lot today. He has some engine and he stays really well.”

Harrington, like the rest of us, believed Our Duke had lost all chance when he made another sloppy leap at the second-last.

"He made about five mistakes during the race and, at the second-last, I thought he had to be out of it," admitted the trainer. "But he pinged the last and quickened up well for a horse of his size.

"I know he won his bumper and was good over hurdles, but everything he did up until now has been a bonus as he was always going to come into his own as a chaser."

She added: “He has plenty of stamina and three miles is no problem. He had to jump a lot quicker today and he did make mistakes, but he will learn a lot.

"Today was the plan and he is probably a horse who doesn’t need a lot of racing, so we'll need to have a chat among ourselves before making a plan. The RSA Chase could suit him."