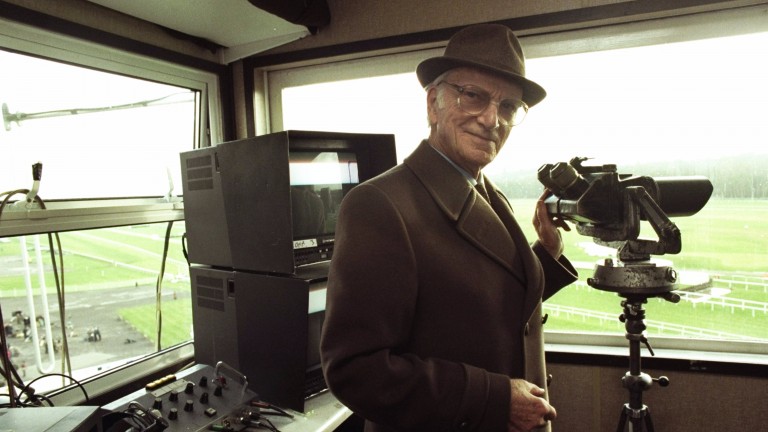 Sir Peter O'Sullevan in the Newbury commentary box on Hennessy day 1997, his final day behind the microphone
Julian Herbert
1 of 1
By Lee Mottershead 6:00PM, NOV 25 2016

It was in the 1997 Hennessy Gold Cup that Sir Peter O'Sullevan gave his final BBC commentary. In the very next race his own colours were worn to victory by Mick Fitzgerald on Sounds Fyne. On Saturday at Newbury, racegoers will see the O'Sullevan silks once again in the race that bears his name.

The broadcaster's great friend JP McManus was bequeathed silks that will forever be associated with Attivo and Be Friendly.

At Newbury, in the second running of O'Sullevan's memorial race, they will be carried by the owner's Jonjo O'Neill-trained runner In The Rough.

Although the colours are officially registered as McManus's third choice, he is bringing them back on one of his two contenders in the Sir Peter O'Sullevan Memorial Handicap Chase, in which In The Rough will be ridden by his retained jockey Barry Geraghty.

"It was very kind of Sir Peter to leave them to me and I thought it was a good opportunity to use them in this race," said McManus.

"It's nice to have them and also nice the powers that be have allowed me to use them. Let's hope we get a fairytale ending."

Also hoping for a fairytale is another of O'Sullevan's closest friends, Mike Dillon, who added: "Peter wanted his colours transferred to JP and also wanted to keep the colours going. The silks are, of course, iconic and this will be the first time JP has used them.

"It would be typical of the way JP does things that he would target this race. Peter would be chuffed to bits to see them being used."