Tizzard favours Neptune with Finian's Oscar back on Cheltenham trail 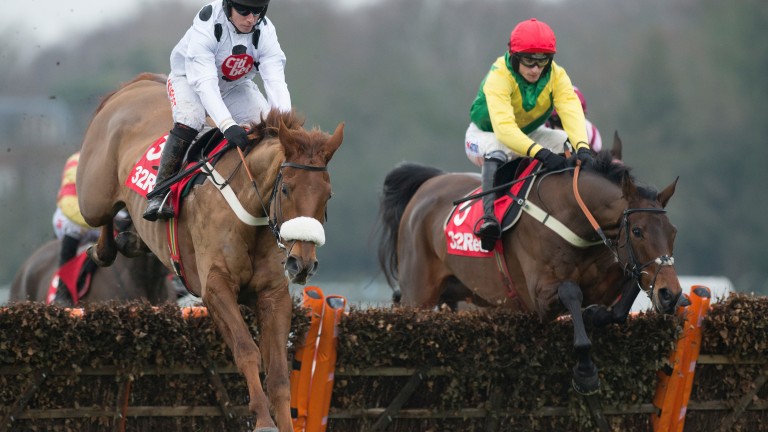 Finian's Oscar (right) jumps the second flight with Chalonnial in the Tolworth Hurdle at Sandown
Edward Whitaker
1 of 1
By David Milnes 9:25AM, FEB 12 2017

The exciting Finian's Oscar looks to be tasked with no more than a conversion in front of the goal posts to extend his unbeaten run to four in the Listed Free Bet at 188Bet Novices' Hurdle (2.20) at Exeter, a race his trainer Colin Tizzard won two years ago with Native River.

The ex-Irish pointer may be short on experience but he certainly hasn't looked it in two wins under rules, most recently when running out a smooth winner of the Grade 1 Tolworth Hurdle at Sandown last month.

Not many winners of that contest pitch up under an 8lb penalty in this Listed test, but Tizzard is eager to find out a bit more about his rising star before a decision is made on which race he turns out in at Cheltenham next month.

The five-year-old, who is the only one of Sunday's six-runner field to have won over jumps, is a general 4-1 favourite for the Neptune Investment Management Novices' Hurdle and as short as 7-1 for the Sky Bet Supreme Novices' Hurdle with the race sponsors.

Tizzard said: "He's just about frightened them all off, and on all known form you would think he will take all the beating. He's a lovely young horse and we've had no issues with him whatsoever."

On the Cheltenham question, the Dorset-based trainer added: "People would know more than me about whether we should be aiming at the Supreme or the Neptune. He is 4-1 favourite for the Neptune and a big price for the Supreme, but is that because people think he won't run in the Supreme?

"He soon shot clear at Sandown before staying on up the hill and he does look like a stayer, so the easiest option would be the Neptune."

Any decision may well be down to other factors. Tizzard said: "I suppose we'll see what the handicapper says. He's the one who knows best. If we have five pounds in hand in one of the races but five pounds to find in the other that will probably tell us what we should do. That will probably be the deciding factor – but he has to win this first."

Among his five opponents is Whatmore who is having just his second outing over hurdles after finishing runner-up at Leicester last month.

On his chances against Finian's Oscar, trainer Henry Daly said: "I would think his chances of turning over the favourite are slim to zero but he is short on experience and there is some nice prize-money on offer for the places so we'll give it a go."

Later on the card, three-time Long Walk Hurdle winner Reve de Sivola runs in his first ever handicap over hurdles when he carries topweight in the Pertemps Network Qualifier (2.50).

The 12-year-old was dropped 6lb for his latest effort when ninth in the Cleeve Hurdle at Cheltenham last month and trainer Nick Williams is hoping the drop in class pays off.

Williams said: "Reve de Sivola has not shown us anything this season and we're hoping the drop into handicap company will spark a revival."

Just below him in the weights is Barney Dwan, with trainer Fergal O'Brien hoping the seven-year-old can qualify for the Pertemps.

He said: "He's very talented and has been unlucky this season. We're just hoping he can finish in the first six and be qualified for Cheltenham."

FIRST PUBLISHED 6:00PM, FEB 11 2017
He's just about frightened them all off, and on all known form you would think he will take all the beating