Talk of the Tracks MARKET RASEN

Oscar rocks up over hurdles to take home valuable prize 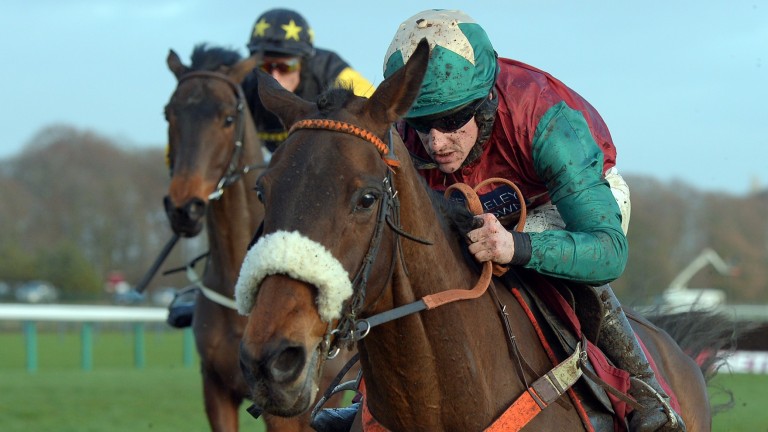 Oscar Rock was back over hurdles for the first time in almost two years after mixing it with the likes of Vautour, Annacotty and The Young Master over the larger obstacles.

Absent from the track since Sandown's bet365 Gold Cup in April, the eight-year-old, running off a hurdle mark 7lb lower than his chase rating, moved into the race stylishly under Brian Hughes.

Duke Street and Aidan Coleman, 9-4 favourite, were moving well too though and momentarily looked to have Oscar Rock's measure but the 11-4 hope ultimately overhauled his rival to score by a length.

"He's a grand horse but his problem is he isn't very easy to place," said Jefferson.

"We had to run today but we'd actually want better ground than this for him, Brian didn't think he liked it at all."

More to come from Cusheen

Cusheen Bridge, like Oscar Rock, brought winning course form to the table and it told as he landed the 2m5f novices' handicap chase.

The eight-year-old, sent off at 14-1, was one of a handful who looked to have an excellent chance as the field turned for home and he saw off the challenge of the game Palm Grey to score by a length.

"I thought he was well in today," said winning jockey Adam Pogson. "The horse he beat round here, Master Dee, is rated 145 now and we were off 125.

"There's a few more races out of him yet, definitely."

This is not where connections had hoped No Comment would get off the mark this term but he did just that as he justified 5-6 favouritism in the opening novices' hurdle over an extended 2m2f.

Having unseated Barry Geraghty when sent off 6-4 favourite for the Grade 2 Persian War at Chepstow last month, he then bumped into the potentially smart Robin Roe at Aintree most recently.

His jumping had left a little to be desired to date but he was better on the whole, despite making hard work of the final hurdle with the race at his mercy.

"He's gaining good experience and, although this was a weaker race than Aintree, it was nice to get his head in front," said winning rider Richard Johnson.

Paddy Brennan told punters in an interview before racing that he had a high opinion of Infinite Sun and the horse proved him right, winning the concluding bumper from the Ffos Las scorer Western Ryder.

The latter was sent off the 4-6 favourite but was denied by a short head by 14-1 shot Infinite Sun.

"I'd ridden the horse that won at Cheltenham the other day [Poetic Rhythm], so we could compare them," said Brennan.

The Injured Jockeys Fund had a stall on course for racegoers to pick up Christmas cards, calendars, diaries and such as we approach what is an important fundraising period of the year for the charity. If you are going racing in the coming weeks please, especially in light of recent news, spare what you can.