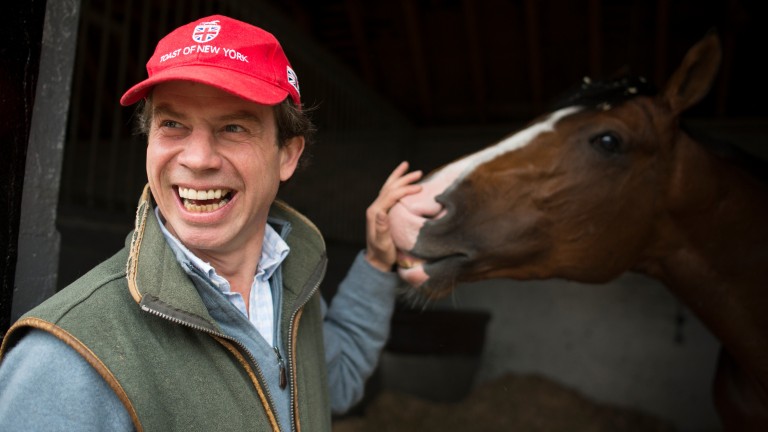 Big votes have been a talking point this year, and Jamie Osborne let the people have their say when trying to find an apprentice to ride for him at Kempton on Wednesday.

While not quite on the Brexit or US presidential scale, there was still a fair degree of interest in Osborne's novel approach to booking the ride on Secret Interlude in a 'hands and heels' apprentice handicap.

Apprentices who have ridden ten or fewer winners are eligible for the race, and Osborne, playing something of an Alan Sugar role, invited applicants to state their case on Twitter.

Having received seven entries, he then let people vote for their choice in a poll.

Explaining his rationale, Osborne said: "I was sitting in the office on Sunday night and didn't have anyone to ride Secret Interlude. My apprentice Lucy Barry isn't eligible as she has ridden more than ten winners, and I haven't had anyone riding out lately who would be eligible.

"I own the filly, but she's being leased to a group of owners for the night and they were relaxed about who was riding her.

"It's something different and I applaud all seven jockeys who applied. I felt letting the public decide was the fairest thing to do."

The winning applicant was Georgia Dobie, who is with the Mark Tompkins yard and has yet to have a winner from 12 rides, narrowly beat Jacob Mitchell, who has had only one ride so far.

Osborne, who has not seen either jockey in action, added: "Jacob Mitchell was very unlucky as he was only a few votes behind and I will be keeping an eye on him as well."

More than 1,100 votes were cast. Asked if he would consider making another ride available via the same approach, Osborne said: "I don't know, we'll see how Georgia does on Wednesday."

FIRST PUBLISHED 2:24PM, NOV 21 2016
It's something different and I applaud all seven jockeys who applied. I felt letting the public decide was the fairest thing to do