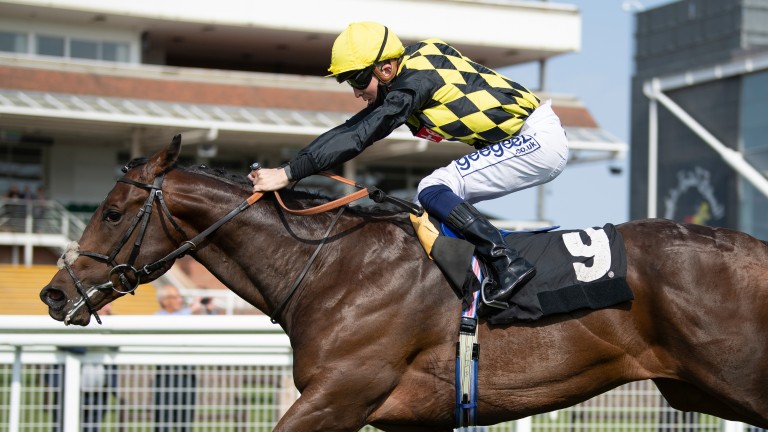 Oo De Lally caused a huge shock in the opening contest on Mill Reef Stakes day at Newbury, leaving a modest debut effort at Ascot in his wake to land division one of the 7f novice stakes at 125-1.

Winning trainer Andrew Balding could hardly be in better form but after beating just one home at Ascot on September 4, victory for Oo De Lally was far from expected.

Yet, under David Probert, the son of Vadamos was far more professional on his second start and there appeared no fluke about the result, Oo De Lally coming through strongly to defeat 33-1 shot Aratus in second, with 50-1 chance Luxy Lou in third.

Backing the first and second in the correct order returned a tasty Exacta dividend of £3,043.

Balding said: "That was a pleasant surprise. I quite liked him before Ascot but he didn't show a lot there and we thought he might be one for a bit further in time, but he knew his job today, travelled strong and got the job done.

"I think he might be my biggest priced winner – I can't think of anything bigger."

He added: "We don't have three-figure priced runners often, but someone would have backed him because our horses do tend to step up for their first runs, so I expect someone in a betting shop somewhere in the country has backed him and will be happy."

It did not take Balding long to add to his tally on the day, landing the mile nursery which kicked-off Ayr's meeting with 16-5 chance Recovery Run.

There was less of a surprise for punters at Navan as the day's big market mover, Dreal Deal, struck after being backed in to 6-4 favourite (from 20).

It was not all smooth sailing as the five-year-old almost came down at the first, but the Ronan McNally-trained runner proved too good and won comfortably.

McNally said: "I thought I had been sold a dud to be honest but thankfully now he's starting to show something and that was nice. Hopefully he can go on and be competitive in handicaps, we are chuffed."

FIRST PUBLISHED 1:29PM, SEP 19 2020
I expect someone in a betting shop somewhere in the country has backed him and will be happy