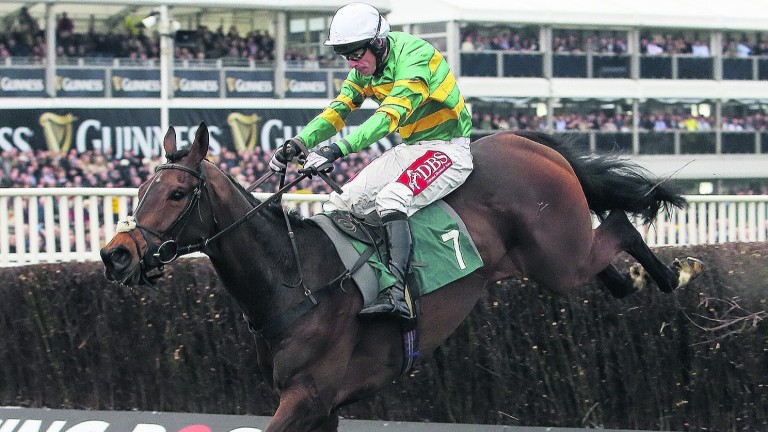 Synchronised was a stamina-soaked winner of the Cheltenham Gold Cup for Jonjo O’Neill, whose Minella Rocco heads for Leopardstown on February 12 for a test that will decide whether he tries to do the same or target the Randox Health Grand National.

The defeat of Gold Cup favourite Thistlecrack to the tragic Many Clouds has encouraged connections of challengers certain to be staying on up the Cheltenham hill, something Minella Rocco did to winning effect in last season’s National Hunt Chase.

Behind him was Native River, now second favourite for the Timico-backed showpiece, giving hope to O’Neill that the seven-year-old, a general 20-1 chance, could emulate Synchronised five years on.

A faller when in contention behind winner Many Clouds at Aintree in December, Minella Rocco is a top-priced 6-1 for the Stan James Irish Gold Cup, which will determine spring plans.

Frank Berry, racing manager to owner JP McManus, said: “The Gold Cup is wide open but it’s still a hard race. He’s going to Leopardstown for the Irish Gold Cup and we’ll learn a lot more from that. That'll be a big day for him.

“He got a bit tired between the last two at Aintree but was running a good race and should hopefully improve from that. If he puts up a good performance at Leopardstown it'll make it easier to decide if he goes for the Gold Cup or the National.”

There are fewer decisions to be made about stablemate More Of That, who is heading for the Grand National, for which he is a top-priced 40-1.

Berry said: “He definitely could go down the National route. He ran reasonably well at Leopardstown [to be sixth in the Lexus] and should come on for the run. We could possibly give him another run before then.”

No Native in National

The O’Neill pair are among 110 possibles for the Grand National on April 8, for which The Last Samuri is general 16-1 market leader after ante-post favourite Native River was not entered.

Colin Tizzard, who relies on Alary for Aintree, said: “Native River was never going to be entered. I discussed it briefly with the owners but it was a no-no. They don’t want him to run in the Grand National as a seven-year-old, it’s all about the Gold Cup.”

Looking increasingly likely to join him at Cheltenham is Champagne West following handicapper Noel O'Brien's reaction to the nine-year-old's victory in the Thyestes Chase.

Trainer Henry de Bromhead said: “Champagne West was put up 12lb for his Thyestes win and is now rated 166, so on that basis you'd have to think in terms of running him in the Gold Cup and hoping he might earn some prize-money.

"His new rating suggests he's entitled to run and that's the way we're leaning. However, he appreciates ease in the ground so we won't make a final decision until closer to the festival."

Gordon Elliott is sending Lexus Chase winner Outlander straight to the Gold Cup, for which he is a top-priced 12-1.

He said: "Outlander had a busy enough first half of the season and his Lexus win entitles him to go for the big one at the festival. He's now rated 164 and the Gold Cup will be next his race.

"Don Poli will run at Leopardstown, and depending on how he gets on we'll decide about the Gold Cup and/or the Grand National.

"Empire Of Dirt has won three big handicaps, and the Irish Gold Cup will be his first attempt at Grade 1 level. How he performs should tell us whether he'll go for the Gold Cup or the National."