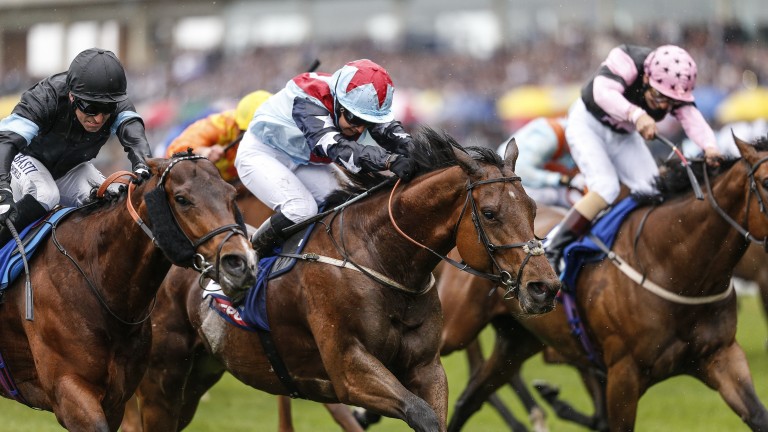 How Enable fares in her bid for back-to-back victories in the Prix de l'Arc De Triomphe on Sunday will determine whether it has been a successful weekend for John Gosden or not, so precious is the filly and prestigious is the race.

However, Gosden also has some noteworthy runners on Saturday, including First Eleven, who carries the Khalid Abdullah silks in the Group 3 Cumberland Lodge Stakes (2.25).

An unlucky loser at Royal Ascot, First Eleven bounced back from a disappointing performance at Newmarket to bolt up in a handicap over this course and distance, looking every inch a Pattern-race performer and is well worth a crack at this level.

At Newmaket, Gosden runs Turgenev in an interesting novice stakes race (2.40) which features plenty of well-bred sorts. Turgenev, however, looked something special when careering away to win at Newcastle and it would be of little surprise were he to end up competing at the highest level.

With Andrea Atzeni riding in France, last year's champion apprentice David Egan is the chief beneficiary, picking up some excellent rides for Roger Varian at Ascot.

Egan made his Group-race breakthrough when Pilaster struck in the Lillie Langtry at Glorious Goodwood and he will be hoping to add to his tally with Laugh A Minute in the Bengough Stakes (3.00).

Laugh A Minute seems to have improved since a gelding operation and, arriving on the back of an encouraging second in a French Group 3, could yet have more to offer.

Egan also has strong claims in the Challenge Cup (3.35) on Cape Byron, who was narrowly beaten over course and distance last time, while Narella came to Britain with a big reputation after making a promising start in Germany and aims to step forward in the October Stakes (4.10).

From just three starts at Ascot, Ripp Orf has won the Victoria Cup, finished third in the International Stakes and won the Cunard Handicap: he is clearly extremely effective over the stiff seven-furlong straight.

David Elsworth's four-year-old will bid to enhance his excellent course record in the £180,000 Challenge Cup (3.35) from a stone higher than the mark he defied in the Victoria Cup.

Ripp-roaring: Turner delight as she lands Victoria Cup for Elsworth

He has well and truly earned that rise, however, and makes his 15th start of the year on a fair-looking mark, facing optimum conditions and ridden by an exceptional apprentice in Jason Watson. Another bold bid looks likely.

The Sun Chariot Stakes at Newmarket (3.15) is not always the strongest of Group 1s but this looks a cracking renewal.

Laurens has won at the highest level three times this season, Wind Chimes was a narrowly beaten second against the colts in the Group 1 Prix du Moulin last time, while Clemmie – widely expected to dominate the division at the start of the campaign – put in her most promising performance of 2018 when a staying-on third behind Laurens in the Matron Stakes at Leopardstown.

Throw in shock 1,000 Guineas winner Billesdon Brook, unexposed Atalanta Stakes winner Veracious and impressive Boomerang Stakes winner I Can Fly and this is a race strong in quality and depth.