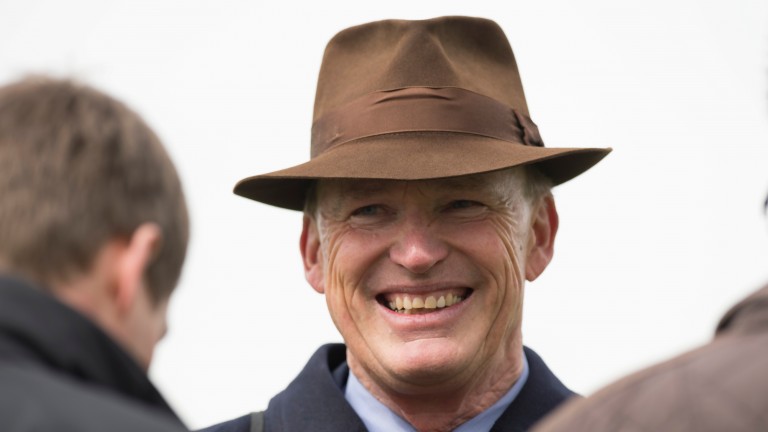 John Gosden: set to do battle with Aidan O'Brien at Lingfield on Saturday
Edward Whitaker
1 of 1
By Jonathan Harding UPDATED 3:31PM, MAY 11 2018

John Gosden will once again do battle with Aidan O’Brien, as their charges top the billing in the Oaks and Derby Trials at Lingfield.

Following an encouraging victory at Windsor last month, the Newmarket trainer has opted to field Stream Song against O’Brien’s Flattering in the Betfred-backed Oaks Trial (1.55), in which the three-year-old will be partnered by Frankie Dettori.

It will be a similar story in the Betfred Derby Trial (2.30) with the Gosden-trained Corelli, who won impressively at Yarmouth this month, facing a stern test against O’Brien colt Kew Gardens, whose trainer is aiming for his fifth win in the race in the last 11 years.

Aidan O’Brien fields Flattering in the Betfred Mobile Oaks Trial at Lingfield, just seven days after a ten-length romp in a 1m2f maiden at Cork.

After finishing down the field over a mile on her debut last July, the three-year-old stormed to a shock victory on her seasonal return and, given she’s by Galileo, a further step up in trip should suit.

The last horse to follow up at Epsom having run in this Listed contest was the Ralph Beckett-trained Look Here in 2008, although she could finish only second here before taking the Oaks. However, with three-time champion jockey Ryan Moore on board for the first time, Flattering can state her Classic credentials.

Frankie Dettori partners Stream Song and Corelli in the Oaks and Derby Trials at Lingfield, going head to head with Ryan Moore, who rides the Ballydoyle favourites in the track’s features.

Dettori won the Oaks on Enable last year and, after missing out on Classic glory in the Qipco 1,000 and 2,000 Guineas last weekend, will be hoping one or both pass their trial tests with flying colours.

The totescoop6 Victoria Cup (4.00) at Ascot is the first of several big handicaps taking place at the course during the Flat season and, with 29 runners declared, will be hotly contested.

Narrowly leading the market for the 7f cavalry charge is Richard Spencer’s Keyser Soze, who was caught in the dying strides in the Newbury Spring Cup last month and has two victories over this trip.

Despite a near four-year absence, Clive Cox’s Louie De Palma has attracted interest, despite being off the track for 1,381 days following an injury at Goodwood in 2014.

FIRST PUBLISHED 2:58PM, MAY 11 2018
The last horse to follow up at Epsom having run in this was the Ralph Beckett-trained Look Here in 2008