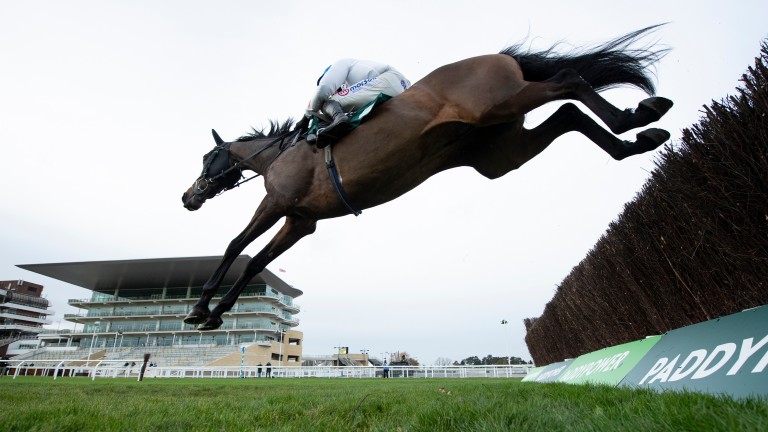 Protektorat: put in a fine round of jumping under Harry Skelton
Edward Whitaker (racingpost.com/photos)
1 of 1
By Peter Scargill UPDATED 9:14AM, NOV 14 2020

The one-time "hooligan" Protektorat earned quotes as short as 16-1 for the Grade 1 Marsh Novices’ Chase at the festival after landing the 2m4f novice chase at Cheltenham with a breathtaking round of jumping.

Trained by Dan Skelton for Sir Alex Ferguson, Ged Mason, John and Lisa Hales, Protektorat was faultless as he made all the running to win a race won by Time For Rupert, Dynaste and Taquin Du Seuil.

Betway made the five-year-old 20-1 for the Marsh in March, a race for which the unbeaten Envoi Allen is the general 9-4 favourite.

Winning jockey Harry Skelton said: "I haven't ridden many around this track that jump like that. He was unreal. I was never worried about the trip and he's an out-and-out galloper.

"When we first got him he was a bit of a write-off, a bit of a hooligan, but he's kept getting better and we see him as a three-mile chaser, although he won't go that far this year.

"He's got the attributes to be a good horse but there's no big rush. We won't run him too often and next year he could be very good."

Protektorat was winning for the second time over fences and his trainer Dan Skelton said chasing has brought out the best in him.

"When we got him from France he was one of those typical juveniles that think they're incredibly quick but they have a quick brain and slow legs," he said. "Once they accept what they are they're so much better. Ultimately getting him over a fence has been the key."

Does He Know does it again for Bailey

The Grade 1 Challow Novices' Hurdle at Newbury next month is the likely next stop for Does He Know after he secured another victory at Cheltenham on Friday.

The five-year-old was an impressive winner at Cheltenham last month and is proving to be a "dream" for his owners, the Yes He Does Syndicate, according to trainer Kim Bailey.

"It was a really good performance and David [Bass, jockey] said he felt better today than last time," Bailey said. "It’s a dream for the syndicate who own him."

Does He Know is a 33-1 shot for the Ballymore Novices' Hurdle at the Cheltenham Festival after his success on Friday, and the race will be under consideration according to Bailey.

He said: "One has to think about it but possibly the Challow Hurdle is the next step from here."

FIRST PUBLISHED 3:36PM, NOV 13 2020
He's got the attributes to be a good horse but there's no big rush. We won't run him too often and next year he could be very good