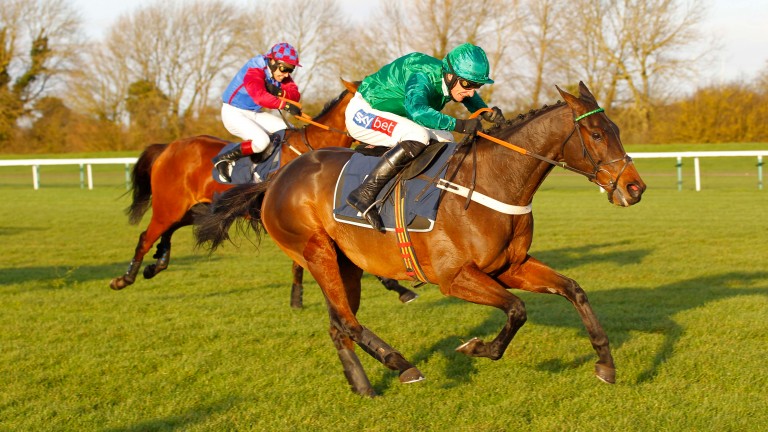 Racing returns to ITV4 on Saturday with coverage see-sawing between competitive cards at Kempton and Warwick. Below are the key runners worth following in the televised races.

Colin Tizzard has had some high-class novice chasers in recent years and Highest Sun could be another. The six-year-old has performed well in his three races over fences and has earned this step up in class.

After finishing runner-up to Nicky Henderson's Champ on his chase debut at Newbury and the same trainer's Pym at Ascot next time, Highest Sun recorded a comfortable victory over Diablo De Rouhet, another Henderson-trained chaser, in a match at Plumpton last month.

We will learn more on his first start in Graded company over fences, but it is worth noting that this contest has often been used as a stepping stone to the National Hunt Chase with Ok Corral and Ms Parfois, the last two winners of this race, both going off at short prices for the amateur riders' showpiece at the Cheltenham Festival in March.

With much of the coverage of this race focusing on Altior's withdrawal, his stablemate Top Notch has slipped under the radar.

The nine-year-old was a comprehensive winner when this was a Listed race last season, beating Black Corton by five lengths and providing Nicky Henderson with his third win in four years.

After winning at Aintree on his seasonal reappearance, Top Notch landed the Grade 2 Peterborough Chase at Huntingdon, where Henderson described him as the most popular horse in his yard.

With 12 winners from 42 runners, seven more successes than his nearest rival, Dan Skelton has an impressive record at Warwick this season.

The trainer is once again well represented at the track but his best chance could be with Shan Blue, who runs in the colours of Colm Donlon, owner of recent Sandown winner Silver Forever.

Shan Blue is being thrown into deeper waters on just his fourth start over hurdles, but he is in good form after a 20-length demolition of eight rivals on testing ground at Southwell last month.

The future is often bright for the winner of this contest. Notable names on its roll of honour include 2019 Coral Cup winner William Henry and Grade 1-winning chaser Tea For Two.

The race has attracted its usual competitive field, but the market leans towards the JP McManus-owned Notre Pari, winner of an eight-runner handicap hurdle at Aintree last month.

That form is yet to be boosted by the beaten horses but it was a professional performance by Notre Pari, who was strong at the finish.

The Graded contests come thick and fast at Warwick and the Classic Chase has attracted last year's winner Impulsive Star.

Also in attendance is The Conditional, whose one and a half length second to De Rasher Counter in the Ladbrokes Trophy at Newbury was paid a compliment this week when the winner was handed a Gold Cup entry by Emma Lavelle.

This race was a useful staging post for 2017 Grand National winner One For Arthur so make sure to have your notebook at the ready.

There are a number of possible solutions to this handicap puzzle but, as was so often the case last season, the answer could be the combination of champion trainer Paul Nicholls and jockey Harry Cobden.

They combine with Touch Kick, who could manage only sixth in the Grand Sefton but had won well over this 3m trip at Fakenham on his previous start.

Gordon Elliott is a familiar sight at Wexford, but not at Warwick, where he runs Sire Du Berlais and Its All Guesswork in this qualifier. The pair will take his career tally of runners at the track to eight.

Its All Guesswork runs in the colours of Philip Reynolds, who owns 2018 RSA Chase winner Presenting Percy, and will be partnered by Richard Johnson, who Elliott regularly calls on for his runners in Britain.

The eight-year-old has won only once and is making his first start since finishing down the field in the Kim Muir at Cheltenham.

FIRST PUBLISHED 8:00PM, JAN 10 2020
With 12 winners from 42 runners, Dan Skelton has an impressive record at Warwick this season