On the run ex-jockey surrenders after manhunt goes viral 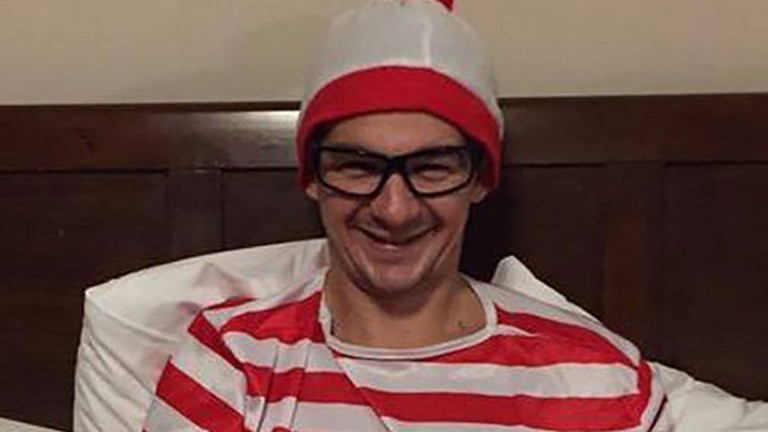 An ex-jockey who taunted police searching for him by dressing up in a Where's Wally outfit and live streaming himself at large on social media, handed himself in on Monday.

JJ McMenamin, 30, became the subject of a manhunt after missing a court date last month to face driving offences.

North Yorkshire Police sent a helicopter and officers with sniffer dogs to conduct a search of Leyburn over the weekend, and while the hunt was under way McMenamin posted regular updates on his Facebook account.

Pasting an image of his face on to the Where’s Wally character, he said “Dude. . .  I’m right here” as he declared himself the "Hide And Seek Champion".

In other posts he wrote: "Even got sniffer dogs out and I’m still sat giggling”, adding he claimed that he watched one officer “pull out a wedgie” after struggling over garden fences.

On Monday, dressed in a Where's Wally costume, he filmed his arrival at Harrogate Police Station singing along to Johnny Cash’s Folsom Prison Blues and Lionel Ritchie’s Hello, which includes the lyric “is it me you’re looking for?”

McMenamin had three rides over hurdles for Middleham trainer Jedd O'Keeffe 11 years ago and has worked in numerous other yards since, with one of his most recent spells at Karl Burke's.

"He used to work for me quite a long time ago and then he left," said O'Keeffe. "He's ridden out for us once or twice since.

"I was driving through Leyburn on Saturday and saw the police helicopter hovering and then saw what was in the press afterwards. The staff were telling me what he put on Facebook and it didn't really sound like the lad that I used to know."

Burke said: "He has been back and forth to me several times and probably worked in every yard in Middleham. He left us for the last and final time about three months ago."

A statement from North Yorkshire Police said: "A 30-year-old man from Middleham has been arrested after he handed himself in to officers at Harrogate Police Station.

"The arrest comes after extensive police searches for the man over the weekend, after he failed to turn up for a court hearing for driving offences."

FIRST PUBLISHED 4:13PM, JAN 9 2017
The staff were telling me what he put on Facebook and it didn't really sound like the lad that I used to know