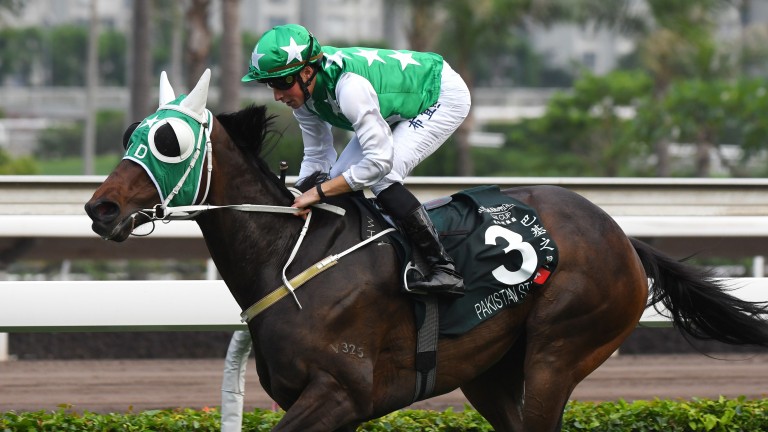 The two-time Group 1 winner, one of Hong Kong’s highest profile horses due to his unique mix of brilliant ability and at times wayward behaviour, will make the short move to join New Zealander O’Sullivan.

“It’s nice to get the chance to train him,” he said. “It will be nice to have a runner in Group races again; that hasn’t happened for a year or so. We’ll see how we go.

“Anybody would be happy to train him, but with him comes the challenges. He’s not straightforward, so hopefully a change of environment, things might improve, who knows?

“Mr. Din [owner] called me last week. We had a coffee on Saturday and he’s a straightforward, quiet-speaking sort of guy. The good thing about him was he never rubbished anybody; he wasn’t critical of Tony or the jockeys or anything like that.”

O’Sullivan has struggled for winners since the retirement of Hong Kong’s champion sprinter Aerovelocity, with only nine victories this season.

Similarly, Pakistan Star has struggled to perform at his flamboyant best this season in six starts. The six-year-old hit notoriety for a brilliant last-to-first debut win in 2016, but it wasn’t until last year that he truly blossomed, winning two Group 1s – the QEII Cup and the Champions & Chater Cup – back-to-back.

Cruz expressed disappointment at losing the superstar he had carefully nurtured. He said: “I did my best but he wasn’t an easy horse to handle in the beginning. He was full of habits but we all like this horse very much.

“It was great to win the two Group 1s but there was a lot of pressure with this horse, it was on all of us in the stable and now I feel so much tension off me. But at the same time, nobody likes to see a horse like that go. I wish them all the best.”

FIRST PUBLISHED 4:56PM, FEB 26 2019
It will be nice to have a runner in Group races again; that hasn?t happened for a year or so