O'Meara and Tudhope bid to outdo rivals for second year 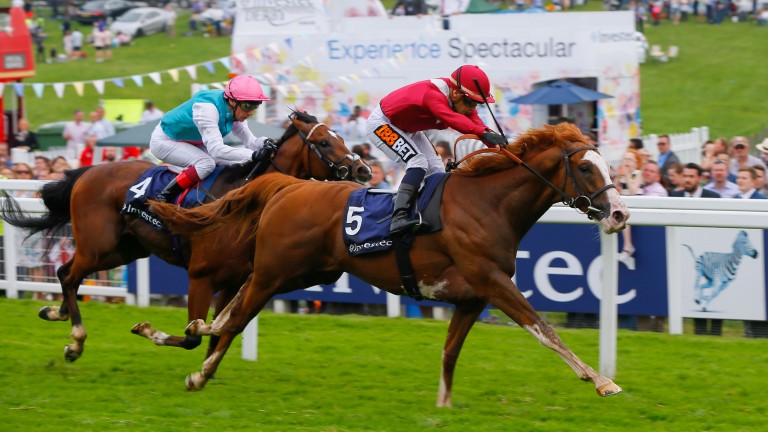 Last year's winning combination of David O'Meara and Danny Tudhope is back for more with Out Do, who is one of only two course-and-distance winners in the eight-strong field.

The North Yorkshire-based pair, who scored with Lord Of The Land in the sprint feature 12 months ago, enjoyed a fine summer with the eight-year-old, who was a gallant winner of the Wokingham at Royal Ascot.

Out Do has fared less well since and reverts to the all-weather for the first time since 2014 in a bid to recapture his sparkle. The omens are good as he has won two of just four previous outings on artificial surfaces.

Joint top on ratings is ex-Irish Blue De Vega, who is having his first start for Robert Cowell after switching from Michael O'Callaghan.

A Group 3 winner as a juvenile, the four-year-old had some impressive form to his name last year, including when third in the Irish 2,000 Guineas. He has lost his swagger of late but Cowell is expecting a decent show.

He said: "It's his first run for us and from what we've seen at home he looks quite useful. We're still learning about him but he should be suited by this sort of trip and we're hopeful of a nice run."

The other joint-top-rated contender is the distinctive Solomon's Bay, who is likely to be easier to spot than most under the floodlights as he has a big white face and four white socks.

The Roger Varian-trained chestnut, who is making his all-weather debut, has to shoulder a 7lb penalty for winning a Listed race at Epsom in June.

Varian's Newmarket colleague James Tate saddles the only filly in the race in Coronation Day, who is back in trip, with connections hoping to enhance her value before the Tattersalls horses-in-training sales later this month.

Tate said: "She has a few pounds to find with some in the race but we expect the course and distance to suit her style of running which may help bridge that gap. Hopefully she can put up a good show before heading to the sales."

Also off to Park Paddocks is Verne Castle, trained by Andrew Balding, who is bidding to recapture the form that led to him winning twice on the all-weather at Lingfield in February.

The trainer said: "He's probably better at five furlongs than six and there are a few better in at the weights than him, but hopefully he can show something before he goes to the sales."

The booking of Ryan Moore suggests a lot more is expected of First Eleven, the Juddmonte-owned half brother to Kingman by Frankel, who makes his second appearance in the 1m½f maiden at Nottingham (2.50).

The colt blew the start to be left several lengths adrift on his Sandown debut last month and, despite reducing the gap, never got into the thick of the action.

Trainer John Gosden said after the race: "He's always been a very laid-back and sleepy horse. He'll improve plenty for the experience but that didn't surprise me at all."

Lyons on a War footing

The 1m1½f maiden (5.00) at Gowran Park is worth tuning in for as there is an interesting subplot.

Ger Lyons was called out on Twitter by someone who declared he would place £50,000 worth of equine talent with the trainer should he manage to get World War to win a race.

The three-year-old colt in question is bred to be good as he is by Galileo out of the high-class Jacqueline Quest, cruelly demoted from first in the 2010 1,000 Guineas.

However, World War has had ten chances to win a race already and has looked a complicated horse at times.

There has been some promise recently because since the Qatar Racing-owned 1.2 million guineas purchase was gelded in June he has filled the runner-up spot on each of his last three starts.

The winning prize for this Gowran maiden is €7,392, and while that is a drop in the ocean compared to what it cost to buy him, victory could be worth considerably more to Lyons – if only for bragging rights on social media!

Cromwell out for another winning Fling

Gavin Cromwell runs three in the concluding 1m6f handicap (5.30) at Gowran. Highland Fling stays well on the Flat and his trainer is hopeful the five-year-old can clinch his third straight win.

He said: "He’s in there with a good chance and he did well at Listowel, but the handicapper definitely didn’t miss him and put him up 11lb, which is an awful lot.”

Stablemate Prospectus, rated 129 over hurdles, is also in good form and will be bidding to step forward from his recent fourth-placed finish over two furlongs shorter at Galway less than a month ago.

Cromwell, who also runs Bottleofsmoke, added: "I hate running all three against each other, but the race is there for them to run in and they all have different owners so they’re taking each other on.

“Prospectus will love the trip and the ground while Bottleofsmoke should also run well. I wouldn’t be surprised if any of them were to win – I can’t separate them.”

In the same race, Paul Townend heads to his local track for a solitary ride aboard Iolani, trained by Willie Mullins, who of course Townend much more commonly rides for over jumps.

The five-year-old is a course-and-distance winner and an interesting rival for Cromwell's trio.