O'Leary: Triumph hero Farclas fit and ready to fire again in 4YO Hurdle 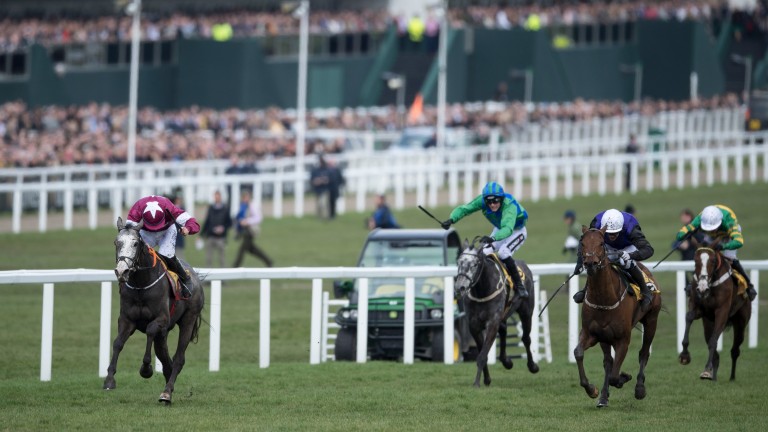 Farclas (left); bidding to become the first horse since Katarino in 1999 to complete the Cheltenham-Punchestown double
Edward Whitaker
1 of 1
By Brian Sheerin 6:00PM, APR 27 2018

A race that is usually run to script and one that Gordon Elliott will be desperately trying to win for the first time with Cheltenham Festival scorer Farclas leading his three runners into battle against Willie Mullins, who saddles six.

No other trainer is involved in a race which rather sums up the dominance of the big two this season over their colleagues.

Farclas will be bidding to become the first horse since the Nicky Henderson-trained Katarino (1999) to win this Grade 1 off the back of landing the Triumph Hurdle.

The Elliott-trained grey will be joined by fellow Gigginstown-owned Mitchouka, a four-time hurdles scorer who has yet to win a race hotter than Grade 3 class and Fred Winter winner Veneer Of Charm.

Speaking about the Gigginstown duo, their racing manager Eddie O'Leary said: "Farclas has come on again since Cheltenham but he is a big weak horse who's going to do very well for a summer out in the field.

"He did well to win the Triumph Hurdle and Gordon has been very happy with how he's come out of that, and we think there's more to come from him. He's very well so hopefully he can show that.

"Mitchouka isn't good enough at this level but he might pick up some prize-money."

Mullins has won the past five runnings of this to add to his victories of 2006 and 2001, and spearheading his six runners this time around is Mr Adjudicator, who finished second to Farclas at Cheltenham.

Mr Adjudicator has taken the scalp of Farclas in the past when winning the Grade 1 Spring Juvenile Hurdle at Leopardstown under Paul Townend in February, and the former champion rider stays loyal to the David Bobbett-owned juvenile.

Mullins also runs Stormy Ireland, a faller at the last in the Triumph, and Saldier, who finished fourth in that race. The Mullins squad is completed by Saglawy, Msassa and Eoline Jolie.