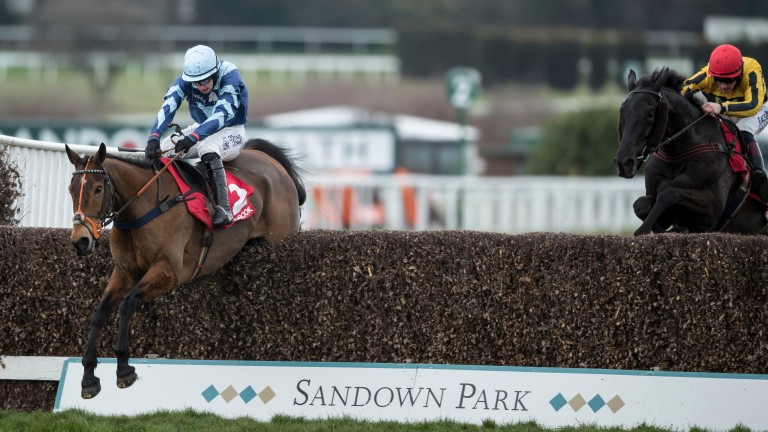 Golden oldie Pete The Feat belied his 14 years yet again as he conjured another extraordinary performance to land his third win in his last six visits to Sandown on Saturday.

The teenager won a terrific tussle for the 3m handicap chase, jumping the last fence in front and then fighting off the pursuing Horatio Hornblower and Fourth Act, who were closing all the way to the line, to secure a hugely popular neck victory.

"It is mad. He loves Sandown – it's the be-all and end-all for him," said trainer Charlie Longsdon. "I don't know why. He gets into a nice rhythm and jumps from fence to fence behind them. Every time it seems it opens up for him after the Pond Fence and he just loves it.

"I get a tingle down the spine – what a star he has been and he has got a massive fan club judging by the amount of emails I got yesterday saying good luck Pete.

"There is no reason to retire him and we might as well dream of going again for the Veterans' Chase final. There's nothing more for him here now until next November and we might mind him for that."

Pete The Feat won the 32Red Veterans' Chase final at Sandown in January last year as a 13-year-old and a year on has shown no signs that age is catching up with him.

Despite finishing second to Buywise in defence of his veterans' crown he has won twice outside veteran company this season, beating seven-year-old Hedgeinator in December and rivals aged ten and nine on this occasion.

Pete The Feat was warmly applauded all the way along the rhododendron walk and into the winner's enclosure after taking his career winnings to £175,000.

His jockey Jonathan Burke: "This is a privilege to be part of his story. I was lucky to ride him in the veterans' final and enjoy the welcome that he got and then the reception he got for finishing a very gallant second. This is special, it means an awful lot.

"Those top-class horses capture the public but these old-timers do as well. He comes back year in year out and fights his battle. He is so brave."

Andrew Cooper, Sandown's director of racing, confirmed the track will look at naming a race after Pete The Feat next season, ideally one that he could run in.

FIRST PUBLISHED 4:32PM, MAR 10 2018
There is no reason to retire him and we might as well dream of going again for the veterans' chase final