Obviously it had to be a Breeders' Cup win for him, eventually 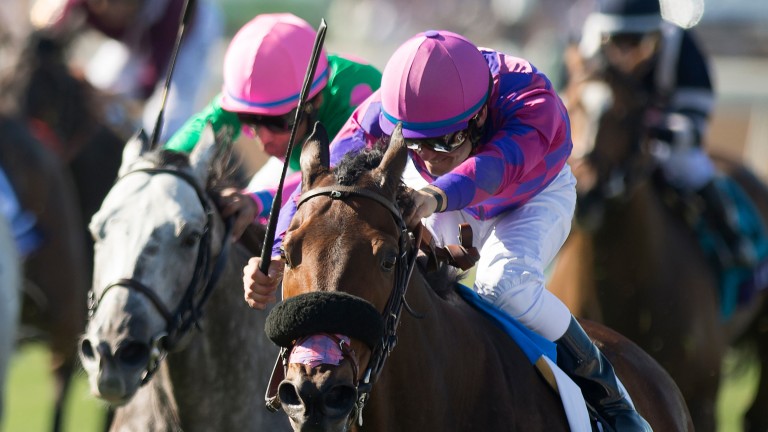 If at first you don't succeed, try, try, try and try again - that's how it worked for the remarkable eight-year-old Obviously.

The Irish-bred gelding, who won twice in his native country before being sold to the USA, had run in the Breeders' Cup Mile in each of the last four years but managed no better than third - achieved back in 2012.

He was dropped back in trip for the Breeders' Cup Sprint, run over 6½f, as he became just the fifth horse to run at the meeting five times.

But Obviously has plenty of speed - remarkably, it is more than four years since he had not had the lead at some stage of a race.

He was not the quickest away this time but he was soon in front under Flavien Prat, in a contest run on a unique downhill course, and held on by a nose from the fast-finishing second Om, with Pure Sensation another length back in third.

Obviously was a first Breeders' Cup winner for trainer Philip d'Amato and a first ride at the meeting for Prat.

The jockey said: "Once he got to the lead he relaxed and I was happy. He was tired close home but he is a good horse.

"This is a dream come true. I feel so lucky."

D'Amato added: "This race is extra special as I used to share this horse with my old boss Mike Mitchell [who died last year] and this is a win for both of us.

"Obviously is the barn favourite. It was a deserved win as he's an absolute warrior - he brings it every time. This win feels so rewarding. Flavien's ride was picture-perfect."

Unusually for a Grade 1 sprint winner, Obviously was schooled over hurdles in his younger days, when he won at Cork and Dundalk for Peter Fahey.

Favourite Washington DC, representing Aidan O'Brien and Ryan Moore, travelled well but could not sustain his effort and faded to finish in mid-division.

The Hugo Palmer-trained Home Of The Brave could never get competitive under James Doyle, who said: "It all happened a bit quick for him. I thought we had a nice position after the first couple but I think he's a horse who needs to go seven or a mile and dictate a bit better. He likes to dominate and breathe a little."

Palmer said: "He just doesn't have the change of gear over that trip and that's why he was in the Mile and we thought about it. Maybe we made the wrong decision but he ran well for a long way."